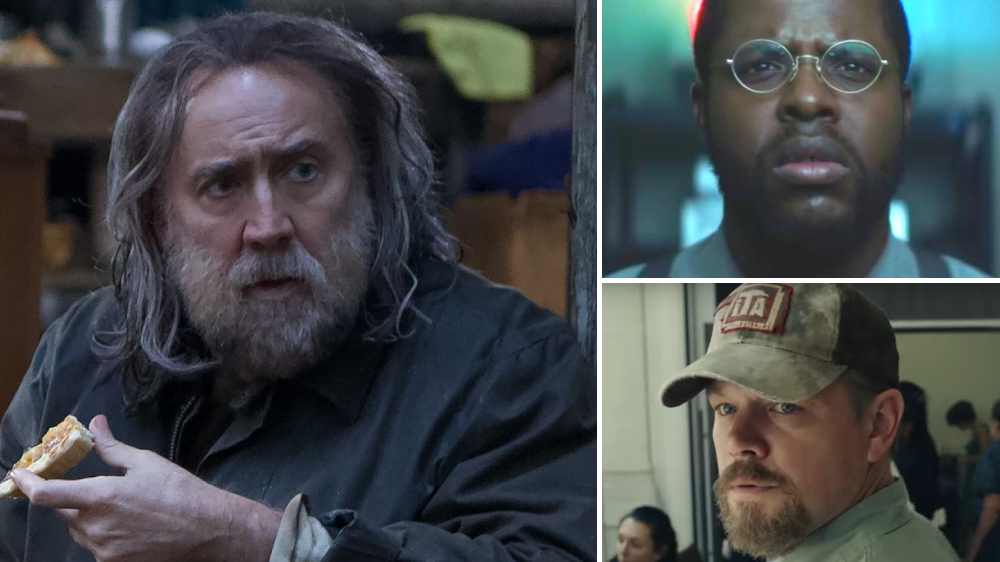 The Oscar season may not have officially begun, but three talented leading men — Nicolas Cage (“Pig“), Matt Damon (“Stillwater“) and Winston Duke (“Nine Days“) — are all delivering awards-worthy performances in three very unconventional movies. Likely to face an uphill battle on the awards circuit, the right campaign and support from critics could help them gain some traction in the awards game.

It’s time we all have a serious talk about Nicolas Cage. It should be no surprise that he delivers a beautifully affecting turn as Rob, a truffle forager who hunts the person who stole his beloved pig, and yet, some still find Cage more worthy of memes than trophies. The 57-year-old actor’s overstuffed filmography is full of both box office successes (“The Rock” and “Face/Off”) and critical misfires (“Captain Corelli’s Mandolin” and “Windtalkers”). Cage’s media persona plays up his zany antics, and surely Andy Samberg’s iconic “Get in the Cage” segments on “Saturday Night Live” didn’t help either, so cinephiles might forget how capable a performer he is. (i.e., “Matchstick Men” and “Bad Lieutenant: Port of Call New Orleans”).

Of course, Cage is already an Academy Award winner for “Leaving Las Vegas” (1995), in which he portrayed an alcoholic Hollywood screenwriter who moves to Las Vegas to drink himself to death. He even picked up a second nomination for his turn as twins Charlie and Donald in Spike Jonze’s “Adaptation” (2002). Early on, some voters may have written off “Pig” due to Cage’s inconsistent track record. But after it won near-universal praise from critics, Neon’s drama could be a contender for acting and even for debut filmmaker Michael Sarnoski, who could be a viable contender for the DGA for the first-time feature category.

Another Oscar darling, Matt Damon, is getting another chomp at the awards bit for his work in Tom McCarthy’s “Stillwater” as an Oklahoma father trying to prove his daughter’s innocence for murder. Damon has dipped into multiple categories at the Oscars: He won for original screenplay with his best pal Ben Affleck for writing “Good Will Hunting” (1997) and was nominated for best actor the same year. In addition to one other lead acting nom for “The Martian” (2015), he’s been nominated in supporting actor (“Invictus”) and in best picture for co-producing “Manchester by the Sea.” He also has a couple of snubs under his belt — “The Talented Mr. Ripley” (1999) and “True Grit” (2010). Given the three acting nominations, it’s hard to say he’s “overdue” for an Oscar, but the trophy has proved elusive over his three-decade career. Kenneth Branagh, an actor, director, writer and producer, with multiple noms and still Oscar-less, is in a similar boat (coincidentally, Branagh is directing another Focus film, “Belfast”).

As unhinged journalists and industry insiders whine about “cancel culture” and “wokeness” infringing upon art (spoiler alert: it isn’t), “Stillwater” shows a Trump supporter navigating a changing society, highlighted in Damon’s final line, “It all looks different.” It’s the opposite of what was attempted with “Hillbilly Elegy” last year, where a venture capitalist disingenuously attempts to equate his struggles to others. The result was a poorly received film that still somehow resulted in an Oscar nomination for Glenn Close, showing that not everyone agrees on movies…and that’s okay.

As audiences discover “Stillwater,” it’s too soon to say whether the remarks from Amanda Knox will affect the film or if audiences will be sympathetic to Damon’s conservative character. He’ll also face many big names in the coming months — Benedict Cumberbatch, Will Smith, Denzel Washington — so a robust campaign will be crucial. Nevertheless, it bodes well that “Stillwater” is the first official Academy screening set to take place this upcoming weekend.

Audiences may be witnessing the birth of a new Hollywood leading man as people get their eyes on Winston Duke in Edson Oda’s gorgeous and soulfully inventive “Nine Days.” Most famous for playing M’Baku in “Black Panther” and with only five films under his belt thus far, Duke can be confidently added to a growing list of Black men in Hollywood who should be leading more film projects. Alongside two majestic turns from his co-stars Zazie Beetz and Independent Spirit Award nominee Benedict Wong, you witness writer and director Oda’s Terrence Malick-esque sensibilities, which are more grounded for general audience accessibility, thus allowing his actors to deliver heartfelt interpretations.

Not too many actors of color have had opportunities to explore characters working in visual media, ones that are cerebral or have them questioning their existence, their world and their masculinity. Sony Pictures Classics may find it challenging to enter the awards conversation with this project, but they’ve achieved some impressive feats before with arthouse fare. Look at original screenplay winner “Talk to Her” (2002), the best actress nominated “Elle” (2016) and the most recent actor and adapted screenplay winner “The Father” (2020). At this point in the year, it’s easy to say that Duke gives the best leading male performance so far. With lots more to come, let’s see if the awards voters are willing to welcome an eclectic crop of leading men.

All three of these films are open in select theaters.