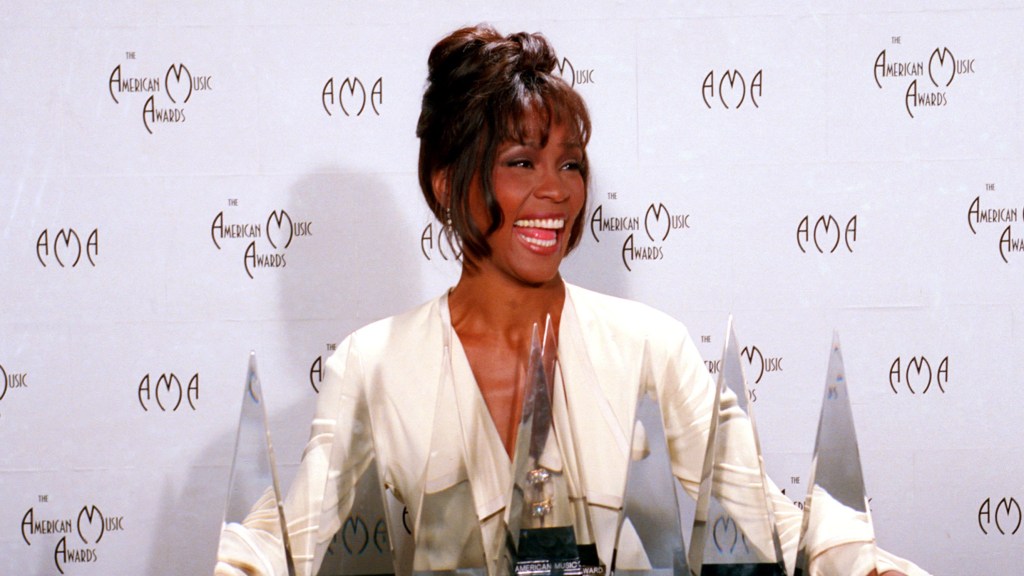 A 1991 recording of Steve Winwood’s “Higher Love” by Whitney Houston will be released on Friday, June 29. The song was first performed at a Tokyo concert in 1990 and features Houston at the top of her vocal game. The recording was intended for her third album, “I’m Your Baby Tonight,” according to the official social media account of Clive Davis, the former Arista Records boss who discovered and developed Houston to become one of the biggest pop singers of the 1980s and 1990s.

Also according to Instagram, Norwegian DJ Kygo looks likely to have remixed the recording. Otherwise, the only information given relates to the original performance of the song and the promised release date of “tomorrow.” (The song will drop at midnight East Coast time.)

“Higher Love” was originally released by Winwood in 1986 and was co-written by Will Jennings, best known for Eric Clapton’s “Tears in Heaven.” Its lyrics tell of a higher purpose to life, lamenting: “Think about it, there must be higher love / Down in the heart or hidden in the stars above / Without it, life is a wasted time / Look inside your heart, I’ll look inside mine.”

Houston died on Feb. 11, 2012. She was found submerged in the bathtub of her room at the Beverly Hilton Hotel and her death was ruled as accidental, though heart disease and chronic cocaine use were said to be contributing factors to the singer’s death.

“Whitney” is the second documentary about the life and death of Whitney Houston to come along in a year, and it’s also the second one that’s entrancingly well-done. (The first, Nick Broomfield’s “Whitney: Can I Be Me,” was released briefly last fall.) Here’s the thing about Whitney Houston: She was so incandescent (the power-belting gospel-pop majesty of her voice, the radiance of her presence) that if you sat through nine documentaries about her, you’d probably experience, each time, what I did during the early scenes of “Whitney” — the hope that somehow, this time, the beautiful enraptured young singer in front of you will find a way to defeat her demons, that they won’t drag her down, that the story will turn out different.

Because surely, it’s one of the most tragic — and, its way, inexplicable — downfalls in the history of American show business. Cocaine addiction, of course, is an insidious monster, but Houston, even after rehab, kept returning to it, as if she wanted to destroy herself. To see her life story is always, on some level, to be buzzing with a single question: Why? Why did the most astonishingly gifted singer of her generation go down a road of darkness and self-sabotage when the very essence of her presence is that she filled the world with light? A lot of people are sure that they know the answer; the most knee-jerk one, of course, is that she should never have gotten involved with the hideous lightweight B-boy smarm-dog Bobby Brown. There’s truth to that, but as “Whitney” captures it’s too easy an answer.

“Whitney,” like “Can I Be Me,” was made by a major director from outside the U.S. — in this case, Kevin Macdonald, the Scottish filmmaker with several terrific documentaries to his credit, like “Touching the Void” and “One Day in September,” though he’s also known for making “The Last King of Scotland.” In “Whitney,” Macdonald lays out Houston’s story — the light and the darkness — in a classically etched, kinetically edited way. He makes superb use of archival footage, tickles us with montages of her heyday (not just Houston but the whole era — the way that her songs, in hindsight, tapped into a certain free-floating ’80s jubilance), and interviews her family members and associates. The film captures the quality that made Whitney Houston magical, but more than that it puts together the warring sides of her soul.

Macdonald creates a tribute to the goose-bump bliss of Houston’s sound, the ability she had to make a melody soar into the heavens, not just in the studio but (for instance) in her performance of “The Star-Spangled Banner” at the Super Bowl in 1991. It was more or less improv (she’d heard the 4/4 backing arrangement just once for about 30 seconds), but her gift was such that she transformed the stolid anthem into a vibratory hymn of liberation. The movie also captures what an awesome global phenomenon “Greatest Love of All” really was. It was love-and-accept-yourself therapy made religious, a song that struck such a universal chord of uplift that Saddam Hussein used a version of it during one of his re-election campaigns.

That said, we don’t necessarily need another documentary to remind us of what a powerful and transformative singer Whitney Houston was. “Whitney” does something more essential: It plunges into the “Why?” and comes up with a shatteringly convincing answer.

Macdonald’s multi-faceted portrait of Houston allows us to touch the intertwined forces that did her in. He captures the spiritual division that ran through her youth: how she grew up in the hood of Newark, during the racial tensions of the ’60s, then moved to East Orange, where she was suddenly in integrated middle-class paradise; how her mother, the R&B singer Cissy Houston, shielded Whitney and groomed her, teaching her to sing with perfectionistic rigor, but spent so much time on tour (mostly as a backup singer) that Whitney and her brothers had to stay with a variety pack of neighbors and relatives; how she came from a legacy of amazing singers (not just Cissy but her nieces, Dionne Warwick and Dee Dee Warwick), all of whom Whitney echoed in her phrasing; and how the family looked, as one witness puts it, “like ‘The Cosby Show’ of Dodd Street” — but, in fact, her father was a corrupt civil servant and jealous philanderer, who tapped his family’s phone to track his wife’s movements.

Cissy, unlike John Houston, had only one affair — but it was with their preacher, which crushed Whitney, because church was the place where she’d begun to sing in public. She viewed it as her spiritual home. She was 18 at the time, and moved out — or, rather, moved in with her best friend, Robin Crawford, who would become her assistant, right-hand woman, and lover.

“Whitney” was made with the cooperation of Houston’s family, but that doesn’t mean it’s a whitewash. The film spends less time than Broomfield’s going into the fact that Whitney’s brothers did drugs with her, but its portrait of the dysfunction of the Houston clan (and their denial of it) stings. Whitney appeared to escape it when she became a star, and the film offers a rebuke of the mythology that’s been peddled by Clive Davis for 35 years — that he “discovered” her. In fact, she was the object of a bidding war between Davis, at Arista Records, and Bruce Lundvall, of Elektra. Davis won out and was, indeed, instrumental in molding her sound.

Her downfall began with two realities that tormented her. The first was her relationship with Robin Crawford, which she felt compelled to keep secret. The other was the growing — if outrageously unjust — perception in the African-American community that her music, by the end of the ’80s, “wasn’t black enough.” Al Sharpton dubbed her Whitey Houston and organized a boycott of her records, and she was famously booed at the 1989 Soul Train Music Awards.

All of which fused into a twist that’s downright Shakespearean. It was on that very night, at the Soul Train Awards, that Whitney Houston met Bobby Brown. She fell for his pimp-strut sexiness and practically jumped into his lap, and before long she was genuinely in love with him. But the love was toxically entwined with opportunism on both sides.

“Whitney” makes the point that Brown served as a potent corrective to the vanilla critique of Houston’s music, and to the growing chorus of rumors about her sexuality. He gave her cred, yet he acted out the downward-sliding half of their “Star Is Born” relationship in the most toxic way possible. He was hit with multiple accusations of sexual harassment, and he comes off as both reckless and clueless — especially in an interview here where he denies that drugs had anything at all to do with Houston’s death. The film has lots of home-video footage of the two of them, and we see how Houston, by being with Brown, let her hair down and returned, on some level, to the childhood bosom of her home in the hood. It’s regression posing as romance.

“Can I Be Me” offered more or less the same analysis, but “Whitney” has something that the earlier film didn’t: a smoking gun. Mary Jones, who was Houston’s aunt, and quite close to her (she was the woman who discovered Whitney face down in a bathtub the night she died in the Beverly Hilton Hotel), claims that there was a sexual abuser in her family, and that Whitney, as a child, was one of the victims. In an incredibly charged and dramatic moment, Jones, seated before the camera, names the abuser: It’s Dee Dee Warwick (who died in 2008).

We’re shocked, but the words of Mary Jones that follow are every bit as important. According to Jones, Whitney wasn’t able to come to terms with her sexuality, and be open about it, because of the horror of that abuse. We’ll never know definitively if that’s true. But it adds up to a powerfully plausible vision of how, and why, Whitney Houston strayed from the path and couldn’t — or wouldn’t — get back on. Hearing that revelation, we see an entirely different path (and yes, Bobby Brown is not on it), for Houston didn’t embrace who she was. As a singer, she was blessed with a gift that could heal the world. What she lacked was the greatest love of all.