‘We’ Review: A Fascinating Doc Exposing the Fractures in French Society Along One Railway Line 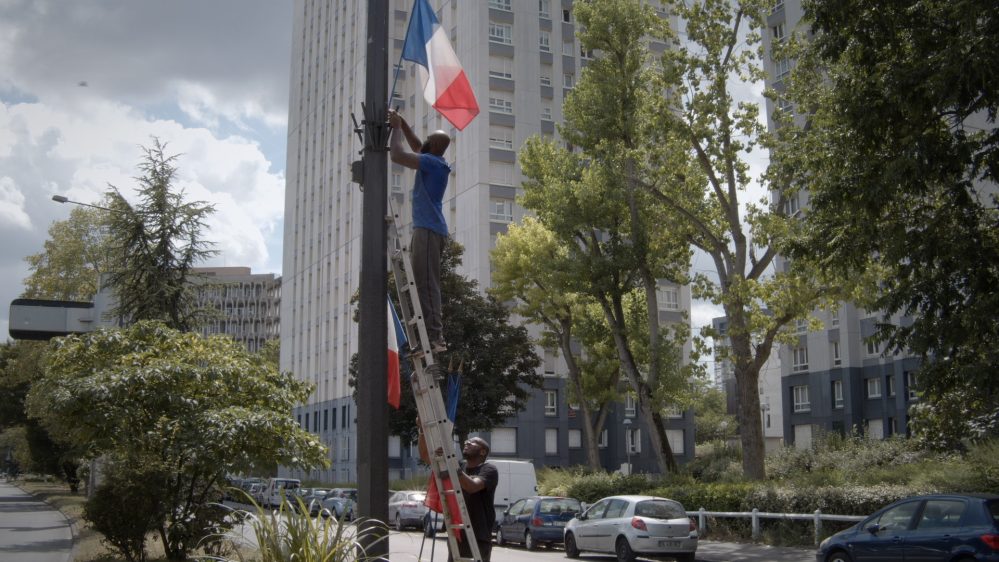 The public, the private and the deeply personal run on parallel tracks in French director Alice Diop’s documentary “We,” a series of vignettes of life along the RER B, a railway line running through the suburbs and exurbs of Paris out to the surrounding countryside. But as it gains momentum, this deceptively cunning documentary — which out of a lineup full of showier titles won the top prize in Berlin’s Encounters section — sees those parallel tracks converge and criss-cross unexpectedly, throwing off fascinating intellectual sparks of insight at the switching points.

The lyrical prologue seems at first to belong to another world. At dusk, a father and son, clad in the countrified gentry’s casual, tweedy uniform of quilted jackets and waterproof boots, are scouting for deer in a quiet, darkening field. Through binoculars, they spot a stag, but suddenly, all poetry drained from the flat digital-video image, we are instead in a drab suburban cafe watching a man drink coffee. This is Ismael Soumaïla Sissoko, whom we learn is a migrant worker from Mali who has lived in France for 20 years but longs to return home. He talks on the phone to his mother as he tinkers under the hood of a beat-up car. “They’re mean to us when we only come here to work,” he tells her offhandedly, talking of the French locals and sniffling through a cold.

Almost as abruptly, we’re in the film’s most confessional segment as Diop’s thoughtful, rueful voiceover narrates a little of her own story. Fragmentary home videos play alongside shots of the scrubby open spaces and blocks of flats near where she grew up, as she frets about how little footage there is of her mother, and considers her own filmmaking career in light of her angst about all the moments of life that go unrecorded.

But that lament is not a statement of intent: “We” is much broader than a personal memoir, although the next person Diop features is her own sister, a community care worker whose patients, including one particularly delightful bright-eyed elderly woman, all have their own little tales to tell. In between the longer segments there are shorter bursts of life’s static: children playing, workmen arranging a bouquet of tricolor flags around a lamppost, young women gossiping over cellphones, church services, guys drinking beer in a park and sardonically singing along to a bouncy chanson, faces upturned at a fireworks display.

Compelling though a lot of this imagery is, it’s the next-to-last extended segment that really changes gear. Diop, now onscreen, has an illuminating conversation with French author Pierre Bergounioux, and this exchange, between the Black filmmaker from the suburbs and the older white man, who mockingly self-identifies as a “rural cretin,” is a stimulating meeting of minds. Their talk ranges through French history and literature, from Molière to the French Revolution to Rousseau and into the present, and the ideas expounded send a retroactive current of electricity crackling through all the scenes we’ve already watched. When finally we return to the deer-spotters of the opening, as they organize a formal hunt complete with all the pageantry of horses and trumpets and a sea of eager, baying hounds, we parse what it implies about the hierarchies of French society with new eyes.

“We” challenges traditional ideas about how a documentary should be organized. Normally, formal principles like point of view or “angle” remain in place throughout; here the approach is scattered between third-person observation, offscreen intervention from the filmmaker, direct interviews and personal musings. It could seem like a lack of rigor, but it’s actually Diop’s coup de grace, as the film becomes more than just a description of various lives from the same, blankly omniscient perspective. Instead, she places herself and us fitfully inside and outside the film’s many points of view, complicating not only the notion of who the film is about, but who it is for. Why would we ever assume that we, the audience, should be treated as some monolithic entity, when the very point she’s proving is that there is no “we” that is?

If this fertile state of the nation address is not easily neatened and summed up into some vaguely humanist, celebratory whole, it’s because its thrillingly ambitious project is to emphasize how the secular French ideals of diversity and multiculturalism are worthless if they do not come with an acknowledgement of their own internal complexity, sometimes even self-contradiction. Diop’s small but potent act of subversion, in choosing disparate lives and moments that could seem linked by a railway line and nothing more, is not just to enlarge the idea of who is meant by the collective French “We.” It is also to reclaim the selection process for inclusion within that tiny, divided pronoun.