Tiny Tim: King for a Day

‘Tiny Tim: King for a Day’ Review: An Enticing Documentary About the Ultimate Freak Superstar 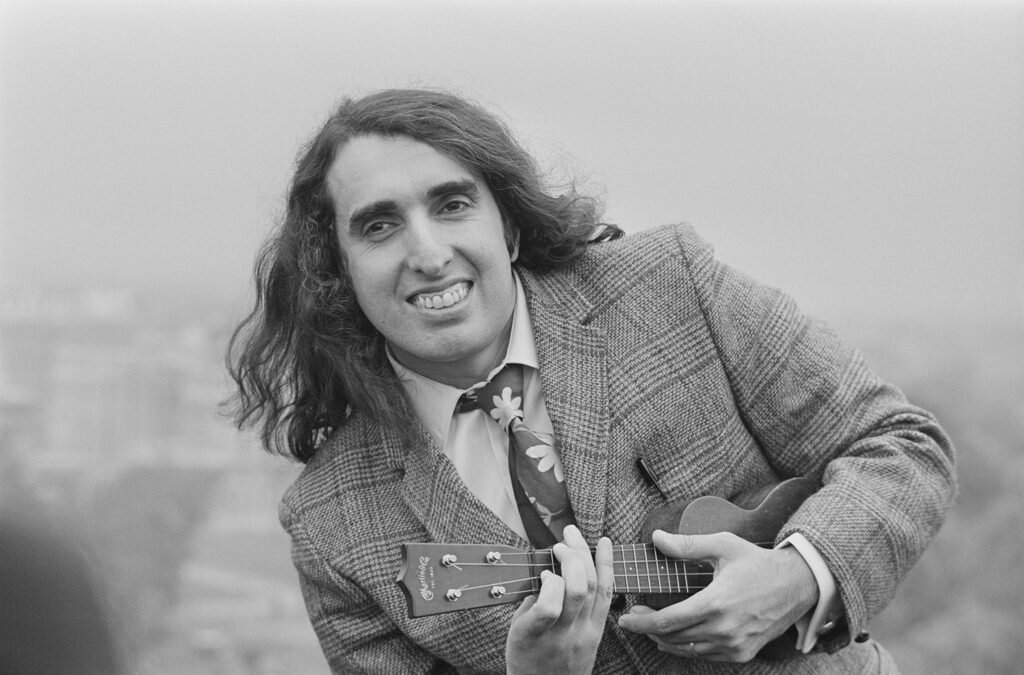 Even in the late 1960s, when it seemed like the world was turning upside down, no one had ever seen anything quite like Tiny Tim. Standing onstage in an oversize plaid jacket, a mop of curls draped over his face, strumming his ukulele as he sang “Tiptoe Through the Tulips” in a trilling falsetto quaver so high it sounded like he was being tickled and tortured at the same time, he was like a troll and a little girl in one body — a flower child who was also a come-hither vampire. He presented himself as an “angelic” creature, not quite of this earth, and maybe that’s what he was. Yet there was something else going on in those bedroom eyes, which he would bat like a silent-movie ingenue. Was he for real? Or was he the original Andy Kaufman and Pee-wee Herman, a kind of postmodern put-on sprite?

The enticing documentary “Tiny Tim: King for a Day” captures the delightful insanity of how Tiny Tim, the kind of elfin novelty act you could imagine getting booed off the stage at an open-mic night, became, for a while, the biggest star on the planet. Was he a fluke? In a way. Yet he didn’t happen out of nowhere. As the documentary captures (and as I never quite understood back in grade school when I would see Tiny Tim on TV), he was the freak of all freaks, but only because he possessed a singular charisma.

Watching him now, 50 years later, you can scarcely take your eyes off him. He was a visibly fractured human being, yet one of the strange things the documentary captures is that Tiny Tim, who started off in the ’50s playing amateur singing contests and dive bars, was one of those people who always knew he was going to be a star. You might say it was his only option. In 1959, he joined a Times Square flea circus, where he was billed as Larry Love, the Human Canary, and even there, in the snake-pit dregs of showbiz, he had the surreal magnetism of self-creation.

His image, and soprano flutter, called up a lot of paradoxes; he was angel and creep, male and female, innocent and libertine. But the most arresting of them was that his entire act flirted with looking and sounding ugly, yet the more you looked and listened to him the more you realized he was beautiful. He could truly sing, sometimes in a lower register; in the film, we hear his cover version of “People Are Strange,” and it’s oddly delectable. And that face had a skewed glamour: He looked like Lord Byron crossed with Nosferatu, with the hair of Jimmy Page and the eyes of Lillian Gish. He was a prankster who was also a disarmingly sincere outsider artist of crackpot passion.

Johan von Sydow, who directed the documentary, has done his research, unearthing mountains of footage of Tiny Tim along with startling photographs, and he puts together the story of how Tiny invented himself, from an early age, as a knowingly “queer” revolutionary of oddness. He was born in New York City in 1932 to parents of strikingly mixed heritage (his mother was a Polish-Jewish garment worker, his father a textile worker from Lebanon), and out of this union Herbert Khaury emerged as a lonely-boy romantic who became a teenage Jesus freak. He had a shy crush on his strapping friend Bobby Gonslaves (who is interviewed in the film, and is shocked to hear that Herbert was in love with him), and we hear excerpts from his diaries, which are read on the soundtrack by “Weird Al” Yankovic, who captures their plaintive sincerity. “The fellows kidded me about my sissyish appearance,” he writes, “but the girls looked at me.”

We see early versions of the Tiny Tim look, most strikingly in a photograph taken by Diane Arbus in 1966, when he was becoming a featured player on the Greenwich Village coffeehouse circuit, and in footage shot at the Andy Warhol Factory. He had an instinct for celebrity before it was fashionable, and the hipster world was onto him — people like the avant-garde guru Jonas Mekas and Bob Dylan, who became a friend of his. Dylan planned to make a film with him, to be directed by D.A. Pennebaker, who says of Tiny, “He was a complete outlaw.” In his diary, Tiny says that he prayed to Jesus and woke up with the ability to sing in that high voice. He divined, early on, that it would be his ticket to fame. “Today,” he writes, “I tried my new style at the old Alliance Club. It worked. Praise the blessed Lord Jesus. They screamed! I must sing the sissy way. God told me to sing the sissy way.”

Singing the sissy way was his ticket to an appearance on “Rowan & Martin’s Laugh-In” in 1968 (his debut on the national stage), and we see that spot. He walks out toting his trademark shopping bag, pulls out the ukulele, and starts to sing. You can feel it within seconds: A star is born. Within a year, he had an album produced by Richard Perry (“God Bless Tiny Tim”) in the Billboard Top 10, he was on the cover of every magazine, including Rolling Stone, and he did every talk show, becoming a regular on “The Tonight Show” and at one point even guest-hosting for David Frost.

Yet what was it about him that magnetized America? In an era of turmoil, he was an otherworldly jester saint who defanged the counterculture and made everyone feel good. At the same time, part of what made Tiny Tim a star ahead of his time was his spectacular projection of sexual ambiguity, which you could argue, as the film does, kicked open the door for every glam rocker. He came on like a Victorian maiden, tossing his head with insolence, referring to the woman he would marry as “Miss Vicky,” and if you chose you could read him as the psycho Liberace of the counterculture.

The truth, though, is that he was even more ambiguous than that. Off camera, he acquired a cult of groupies, a number of whom were underage (von Sydow interviews several of them), and the film is far from clear about what he did or did not do with them. When he fell for the 17-year-old Miss Vicky, it was national news, and their wedding on “The Tonight Show” on Dec. 17, 1969, was seen by 40 million people. I remember it well; the world seemed to stop. It was kind of like the wedding of Princess Di.

But Miss Vicky, who thought she was getting married, wanted to settle down with him and have a home and children. Whereas Tiny was addicted to his celebrity. He stayed on the road, and though they had a daughter, named Tulip (who’s interviewed here), the marriage disintegrated within a year. Making fame his only identity was Tiny Tim’s pathology, and his biggest mistake. For the world, inevitably, moves on. By 1970, it was moving on from the Beatles, so it could certainly move on from a 40ish hippie warbler with a ukulele. The movie chronicles his swift and sure decline, which in its way became as rich and strange as his rise. He was managed, for a while, by mobsters and wound up broke and back in his mother’s apartment.

The last act of “Tiny Tim: King for a Day” is about Tiny’s descent, which the film portrays with a haunted majesty worthy of a Larry Karaszewski/Scott Alexander biopic. He went on the has-been circuit, showing up in rouge and pancake make-up, his outfits looking increasingly clownish as his hair drooped and his flesh sagged. It’s not that he was aging badly. It’s that in losing the bloom he’d had in the late ‘60s, he seemed singularly forlorn.

I spotted him once in midtown New York during the early ’90s, skulking along W. 49th St. as he carried his shopping bag like a homeless person. What struck me was how serious he looked — and, I realized, he was always that way. One associate describes him as a turtle without a shell. From right around that period, we see video footage of a grimy cabaret show in which he collapsed on stage (due to a heart attack). He wasn’t taking care of himself, and his doctors gave him less and less time to live. But his third wife, Miss Sue, who’s a major presence in the film, fixated on him when she was 12, and she stood by him to the end. She describes his last moments, also during a show. Something was wrong, and she walked right up to the stage, just in time to watch him collapse before her. He went out as he’d lived, trilling to the gods, singing for his supper.