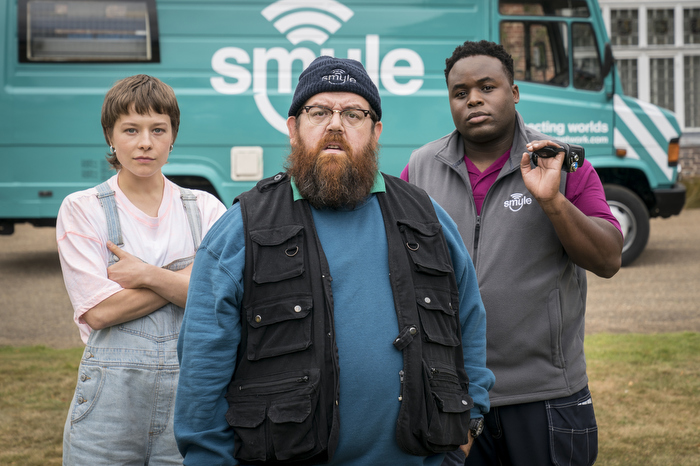 It’d be easy to glance at “Truth Seekers” and mistake it for a satirical farce. The new Amazon series comes from Nat Saunders, James Serafinowicz and the vaunted duo of Nick Frost and Simon Pegg, who have collaborated on genre comedies like “Shaun of the Dead” and “The End of the World.” Starring Frost as a wireless service repairman slash amateur paranormal investigator, “Truth Seekers” has plenty of small-town British charm to spare as he travels from one haunted house to another. But the series also quickly reveals itself to be a genuinely creepy bit of horror, with ghost stories that are tragic and poignant, startling and violent. It channels everything from “The Exorcist” to “Doctor Who” to create set-pieces that stick with you after the credits have rolled, keeping the show from getting stuck in a single comedic gear.

It helps, too, that “Truth Seekers” takes care to create a memorable ensemble of characters who make sure the stories stay relatively grounded. Gus (Frost) has been doing his best to fly solo after the untimely death of his wife, Emily (Rosalie Craig), some 10 years ago, though his cranky father-in-law, Richard (Malcolm McDowell), keeps interrupting his attempts at being a true hermit. Gus spends his off-hours poking around the British countryside for signs of the paranormal, which Emily studied (and obsessed over) all her life. Not until he gets a new assistant in Elton (Samson Kayo), though, does Gus see a single ghost — at which point, he’s suddenly seeing them everywhere he looks.

With Pegg more or less siloed off into a minor storyline in his role as Gus’ boss, Frost gets to play the kind of part assigned to Pegg in their films: the conspiratorial fanboy turned righteous crusader, with a heart of gold that keeps him from tilting into the misogynistic caricature the character could otherwise become. Kayo, then, takes on the typical Frost role of the sidekick who has more to offer than anyone — much less he himself — quite realizes. The actors ease into a friendly chemistry within minutes of Elton’s introduction, which comes in handy, since Gus and Elton also encounter their first apparitions in no time at all. Their banter comes so naturally by the end of the first episode that when it becomes clear that there’s more to Elton than meets the eye, it’s a bit of a shock to remember that he and Gus haven’t known each other that long at all.

Rounding out the cast are Emma D’Arcy as Astrid, a girl on the run from terrifying spirits, and Susan Wokoma as Helen, Elton’s chronically nervous sister. Wokoma, a delight in Michaela Coel’s “Chewing Gum” and a recent highlight in Netflix’s “Enola Holmes,” is a particularly good addition who brings vulnerability and warmth to her every scene. Whether she’s doing special effects makeup tutorials for her growing YouTube channel, bonding with a similarly lonely Richard or steeling herself to venture outside the safe confines of her home, Wokoma makes Helen so immediately engaging that one can readily imagine a version of “Truth Seekers” in which she’s the star.

The first half of the eight-episode season errs toward the procedural-monster-case-of-the-week style that something like “Doctor Who” has long leaned upon, and it works. These episodes open with a flashback to some disturbance past before returning to the present, when Gus and Elton stumble on the phantoms that have been restlessly lurking ever since. The second half, however, opens the story up into something more complex and conspiratorial, especially as it reveals a big bad villain in Dr. Peter Toynbee (Julian Barratt), a self-made celebrity expert on all things supernatural. This narrative turn only sometimes works; the loss of the self-contained episode frameworks noticeably slackens the show’s grip on its own specific universe. And yet, the season moves briskly enough that it’s hard to fault its detours too much. Eight episodes are just enough to spend some time in its world, and the spiritual one lurking beyond.