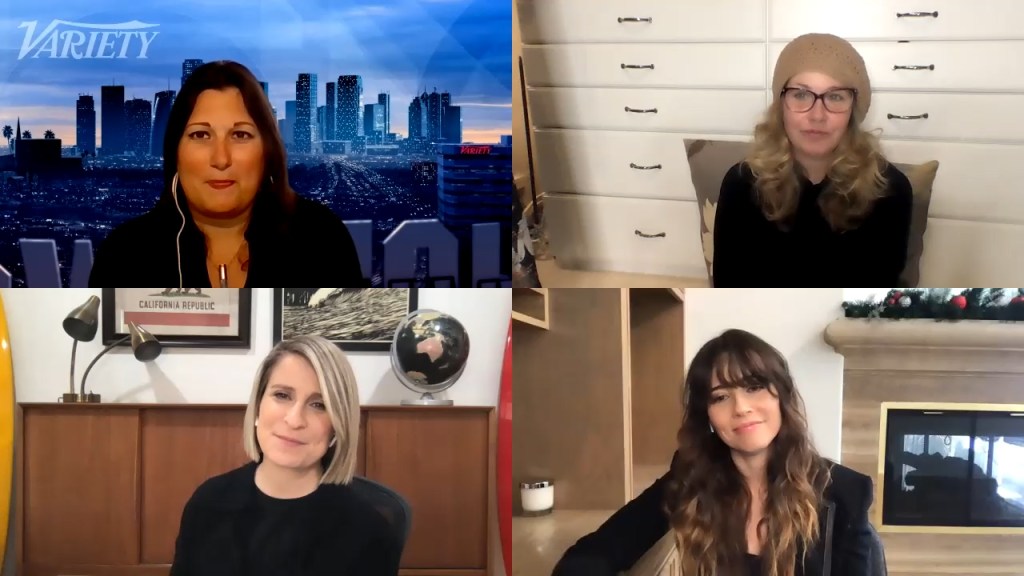 The hit traumedy “Dead to Me” is a one-of-a-kind series that explores the absurdity and twists and turns of life, according to its show creator and main leads.

“For me, I was longing to create a show that felt true to life in its tone, maybe not in the situation, obviously,” Feldman said. “It’s a bit of a heightened situation, sometimes even soap opera-esque at times. But I really wanted the characters to feel grounded. I wanted it to feel like ordinary people in extraordinary situations, because the way that I realized that I look at life is that any given day can be a traumedy.”

Applegate said she often jokes that the series is a documentary for her, due to the fact that her character Jen, a no-bullshit and quick-to-anger Brooklynite, is imbued with Applegate’s own personal history. “This show has its own tone, so it was beautiful for us to all create the world that we were living in and finding that balance between the humor not being jokes, but the humor because life is just bizarre and funny and painful,” Applegate said.

A significant aspect of the show’s tone is colored by grief, something Feldman wanted to emphasize in Jen’s personality, especially through the character’s penchant for cursing. “I definitely imbued the character with that New York toughness … I wanted her to be repellent to people, if possible, because that’s how it feels when you’re in grief. When you’re in grief, it … makes people feel really uncomfortable. Also, she’s extremely angry and she has every right to be.”

When crafting Cardellini’s character Judy, an optimistic over-apologizer and the antithesis of Jen, Feldman said her romance with Michelle (Natalie Morales) in Season 2 was deliberately crafted to be a unique portraiture of queer womanhood.

“I just didn’t want to tell the coming out story with Judy, because it’s just not about that,” Feldman said. “This is a show about grief, loss, forgiveness, friendship … She never has to make a grand announcement. She never has to sit Jen down and say, ‘I have to tell you something. I like women,’ because, in my experience, being gay or queer is just normal … and I was just longing to see a narrative on TV that reflected that normalcy.”

The panelists said the series’ success rests on the natural chemistry of its actors, including James Marsden, who played the toxic Steve in Season 1 and his polar-opposite amiable twin and Jen’s love interest Ben in Season 2. After Marsden asked Feldman to come back on the show in Season 2, she landed on the notion of twins, an idea she calls “stupid in the most beautiful way.”

“We wanted Jen to be the audience,” Feldman said. “We wanted somebody to be in there going like, ‘Are you fucking crazy? Who would believe this?’” And so, we thought, ‘Oh, well, then we’ll just have Jen say all the things that we think the audience would think,’ which is, ‘They’re the same fucking person.’ Because if we say it first, then we’ll beat everybody to it.”

While Applegate and Cardellini said they act off of the script, they also draw from personal experiences to improv scenes. Production keeps the camera rolling at the end of a shoot to see how the conversation evolves. In one scene showcased during the Q&A, Judy tells Jen she should love herself more after she laments about gaining 10 pounds over the summer.

“This was a conversation I think Linda and I were having in the makeup trailer,” Applegate said. “It’s actually something that Linda has said to me in life … That was Christina and Linda.”

The stars said they lean on each other during particularly emotional scenes, which often take a toll on the actors’ well-being. After shooting a scene where her character violently hits a car with a golf club, Applegate said she couldn’t stop crying. Cardellini comforted her by saying, “Your body doesn’t know you’re faking.”

“Professionally, creatively, it’s been so fulfilling and I love when we’re on set together and we’re doing what we’re doing because even when it’s most serious and even when it’s draining … it is satisfying on some level that I don’t know that I’ve experienced,” Cardellini said.

“Dead To Me” has been renewed for a third and final season, which Feldman has already begun writing. Production on the season is currently scheduled for 2021.

Although there has been a lot of discussion about the number of women working in Hollywood, as well as the need for pay parity for them, one area that needs just as much examination but has yet to receive as much notice is the type of projects and roles available.

Bringing together talent from female-led series such as “Dead To Me,” “GLOW,” “Orange is the New Black,” “Russian Doll” and “The Umbrella Academy,” the streamer hosted a conversation about the differences in roles and work environments available to women today. Gilpin pointed out that she still has to be in hair and make-up and wearing “dorsi muscle-defining” shoes if she is in a scene that takes place in a grocery store, which doesn’t necessarily lend itself to realism, even though her character is multi-faceted. “Dead To Me’s” Christina Applegate also shared that she would love to be able to wear jeans and a tee-shirt and just allow what is most interesting about a character to come through in the dialogue and emotional expressions.

The age female actors are allowed to play is still a point of contention for some, with Gilpin sharing that she goes on auditions to play the girlfriends of male actors who, just four years ago, she was auditioning to play their daughters. Gilpin said that her mother once told her being an actor meant being a “weird clown witch person,” and she believed she’d be able to tap into such range. But it was “a shock graduating from college and auditioning for ‘Gossip Girl’ and [hearing], ‘Don’t be weird, just the squinting and no choices.’”

“I believed the business when it told me you should Trojan horse the clown witch in a girly filter,” Gilpin said. “I did whatever it takes. I wanted health insurance; I wanted to work as an actor.”

However, when working on shows led by women, the women agreed they have seen progress.

“There was previously this very limited idea for a female character where endgame must be finding ‘him,’ said “Russian Doll” and “Orange is the New Black’s” Natasha Lyonne, “but once you eliminate that, there are so many other moves that that character can make. In a deeper sense there are so many bigger ways to write when it’s all of us together.”

Lyonne added that in classic films such as “Easy Rider” and “Raging Bull,” male characters were allowed to just linger in moments because “we know they’re thinking big thoughts; they’re men. Ali McGraw maybe pops up, but let’s keep our focus, guys.” But today, thanks to shows like her own and the others the women on stage were representing, women were moving into such spaces, too. “These are the new ‘Easy Riders,’ ‘Raging Bulls,’ and I’m very excited.”

After more than 40 years in the business (she got her SAG card in 1975), Applegate said “Dead To Me” was the first time working on a set dominated by women, from the showrunner and other executive producers to the directors (eight of the 10 episodes were director by women). The difference she observed was that it was a “beautiful, creative safe space” where “no one was trying to make you perfect.” The series called for her and co-star Linda Cardellini to go to some raw places, dealing with grief and deception, and the ability to be able to take some time on set to find those places was something they attributed to having women at the helm.

“I think women just trust other women more,” Cardellini said. “Women, we know that we come in all different forms of power [and] can support each other with a community feel.”

While part of the attraction to “Dead To Me” for Cardellini was the ability to share as much screen time with another woman as she had with men in her past work, “The Umbrella Academy’s” Mary J. Blige admitted she had to grow into being comfortable being around women all of the time. Once she worked on “Mudbound” with Dee Rees, she saw a new benefit to having women in leadership roles: She could clearly and concisely communicate what she wanted, wheres with male directors Blige had worked with in the past, she said they would “overtalk” until she no longer understood what she was supposed to be doing.

“Once you grow up, you’re confident with yourself, then the female gang changes. We’re all a gang; we’re all a crew; we can hang out and vibe together, and that’s when the business will change,” Blige said.

Such a movement towards supporting each other, rather than viewing each other as competition when auditions traditionally, literally, pit women against each other for the same, sometimes very small role, is not something that will be easy for everyone over night. But the most important thing is that it is inclusive for all: “This movement isn’t only for one person who has her shoulders back and purse organized,” Gilpin said. “It’s for the person who has trash in their purse, as well.”

Polanco said that true change in the industry will come when “we’re not singling out the women director,” though. “Who we are, gender-wise, [isn’t] what should be accentuated,” she said. “There’s a lot of pressure on us when we have a platform to be this individual. I think what works now is embracing your authentic self: We come broken, there are fragments we leave behind, and we have to be proud of it. I truly believe that our platform is to voice our journey and to reach out and inspire, to connect.”

Added Lyonne: “There’s surrealism to the fact that on the one hand you’re reading the news and it’s like, ‘Let’s squash women’s rights; let’s get rid of Roe V. Wade; I think that’s causing trouble,’ but on the other hand, women in film! Which is it? There’s sort of a battle right now being fought between how this is going to end up. Is this going to end up with a loss of rights? It creates this team spirit of, ‘We must side with each other; we must hold each other up.’ Now is the time to band together on every level, and yes professionally as well.”