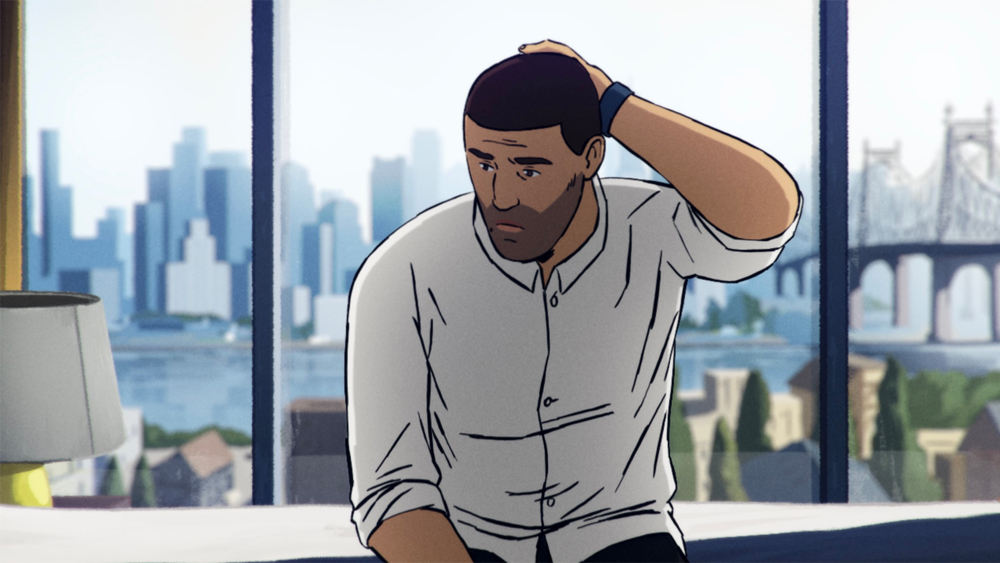 Amin Nawabi is not the real name of the Afghan refugee introduced in the Sundance movie “Flee,” nor is that his real face, which has been distorted by animation to protect his identity. As “Flee” unfolds, you may also start to question whether the story Amin shares is even real, doubling back and contradicting itself as it does over the course of director Jonas Poher Rasmussen’s unconventional portrait.

There’s a good reason for such subterfuge. “Flee,” which would have premiered at Cannes last year had the coronavirus not capsized the festival, is an original artistic exploration of the way that trauma impacts one’s sense of self. Its shifting and somewhat unreliable form intuitively reflects how its subject has hidden the truth of his past from others over the years, including his partner, Kasper, and his longtime friend, the director.

Rasmussen met Amin when they were both teens in Denmark, and though he was aware that the young immigrant had fled his home country, he had no idea of the circumstances, or the circuitous route that brought him to Europe, alone. As presented, the documentary is the director’s attempt to unravel those details, and it benefits from the intimacy between the filmmaker and his subject. But it suffers from that familiarity as well, since Amin’s persona is not firmly established before the exploration begins.

The filmmaker sees a well-adjusted adult — an accomplished academic in a loving relationship, looking to settle down once and for all — albeit one with secrets, whereas we see a stranger. In delving immediately into Amin’s first memories, we are constructing an image according to what he chooses to share. When he tells us that he was always “different,” dressing in his sisters’ dresses from a young age, we can conclude that he’s homosexual long before Amin knew this about himself. And because he was born in Afghanistan, we can also anticipate that his “difference” will be a source of tension.

Amin’s first overt lie (which constitutes a spoiler, so be warned) is that his entire family was killed after the mujahedeen took control of the country. We go along with this narrative because there’s no reason to question it, and so did Rasmussen, apparently, since his surprise is what clues us in that perhaps there’s more to Amin’s story. As a child, he escaped from Kabul to Moscow, where harsh times and corrupt officials made it necessary for him to sneak West to Europe. But how did he get there: on foot, by cargo trailer, or under a falsified passport? All of the above, “Flee” suggests in various conflicting accounts, and it can be confusing as to which are credible.

Apart from some archival live-action footage and a handful of vintage television broadcasts, “Flee” is entirely animated. Some of these sequences appear to have been rotoscoped directly over video recordings, à la Richard Linklater’s “Waking Life,” while others were storyboarded and drawn from scratch. In either case, there’s something inherently unreliable about the approach, since animation provides a filter of sorts between the material — whether the unseen image of the speaker or his impressionistically rendered memories — and our brains.

The human face is the best lie detector we have, but in “Flee,” we don’t even have that to go by. Rasmussen, who has a background in radio, chooses here to supply visuals that might have been better left to our imagination. But he’s an effective interviewer, coaxing details from a reluctant subject that enrich our idea of the refugee experience. For Amin, the process seems therapeutic, helping him process the guilt, shame and fear he carries.

It may seem that this review is making too much of the truth. The movie amounts to a gradual unveiling of Amin’s past, and it never misleads for effect. Rather, Rasmussen wants audiences to appreciate how Amin has had to construct a kind of false identity around himself, first because of his fragile visa status, but also on account of his sexuality. An ex-boyfriend once threatened to report Amin to the authorities after he discovered the pretext on which he’d requested asylum was untrue, and ever since, Amin has closeted that part of himself from others.

“Flee” represents a coming out on various levels, and also a homecoming, as Rasmussen follows Amin long enough to observe the house hunt that may finally offer him the domestic stability his life has always lacked. (This last conclusion feels a bit too pat for the portrait that has preceded it, but it’s the bow the director wants to put on his package.) In the end, however we take Amin’s story, the film is an incredibly intimate act of sharing. The question shouldn’t be whether we can trust Amin, but whether he can trust us, and we don’t need to see or know everything to respect the gift of hearing all that he’s been through.