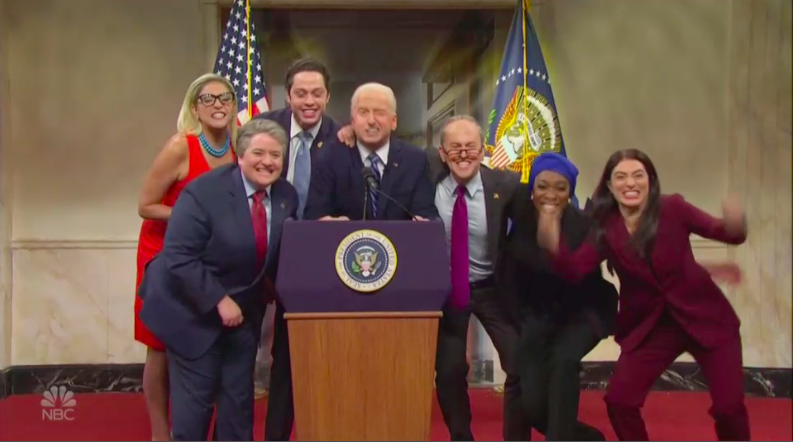 New “Saturday Night Live” featured player James Austin Johnson made his mark on the NBC late-night sketch comedy series immediately from the start of the Season 47 premiere: He debuted as Joe Biden impersonation during a “special message from the president” cold open sketch.

After winning eight Emmys at the 73rd annual ceremonies last month, including the variety sketch series award for the fifth consecutive year, “SNL” returned to Studio 8H in New York City for the live premiere of its 47th season on Oct. 2. Owen Wilson was the host and Kacey Musgraves was the musical guest. Neither appeared in the cold open sketch.

It was not an easy task for the newcomer, who achieved previous internet fame for his impression of former president Donald Trump, to take on the opening. He had the unenviable task of summarizing the last few months of U.S. politics in a few short minutes. And how was his summer? Bad, he said.

“Not Cuomo bad, but definitely not Afghanistan good,” he explained. “Everyone keeps razzing me about that drone strike, but on the bright side, I went the entire summer without falling down the stairs once.”

He commented on Broadway being back, but noted that so was the Taliban. “You win some, you lose some,” he said.

He also drew comparisons to Trump, noting that, “I’m like an oil change; you don’t think about me until you absolutely have to.”

Of course the latter had to comment on Ocasio-Cortez’ Met Gala moment, in which she wore a dress that said “Tax the Rich” — and “then spent all night partying with the rich. Oops.”

Johnson as Biden wanted to bring everyone together because he felt that in the end they all wanted the same thing. This was immediately proven not to be true when Villaseñor’s Ocasio-Cortez listed how much she wanted in clean energy tax credits, while Bryant’s Machin countered with “zero.”

Other things they discussed included the child tax credit, water, the cost of prescription drugs, and roads, which Strong’s Sinema said she wanted none of because of “chaos.”

Johnson follows in the footsteps of his new co-star Moffat, who previously played the president last season after taking over for special guest star Jim Carrey. Others who played the politician on the series include Kevin Nealon, Jason Sudeikis, Woody Harrelson and John Mulaney.