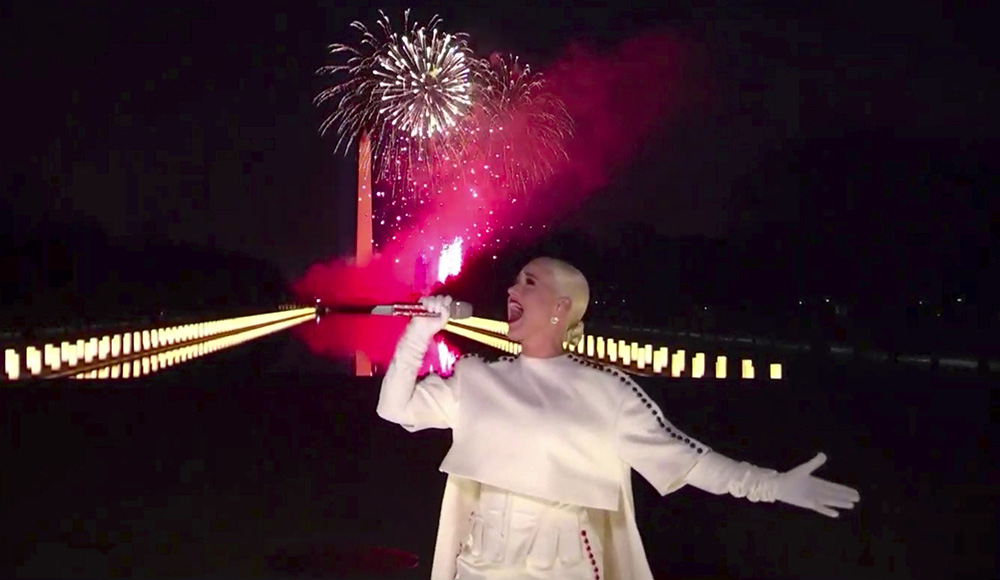 During his brief appearance in the primetime special honoring his inauguration, President Joe Biden nonetheless insisted that he and Vice President Kamala Harris “wanted to make sure our inauguration wasn’t about us, but about you, the American people.” It was a nice sentiment, even if it wasn’t especially possible to achieve; by default, the first day of any presidential term revolves around the new president. So even though the special took pains to paint a broader portrait of America writ large, “Celebrating America” — a slick production teeming with stars, aggressively sincere stories and somber moments of remembrance — inevitably reflected the incoming administration that inspired it.

“Celebrating America” traded the usual inauguration night balls for socially distanced performances from around the country, spotlights of “everyday heroes,” and solemn acknowledgments of the extraordinarily tough few years the country has muscled through to get to this moment. Biden and Harris both spoke just once; otherwise, host Tom Hanks held the night together from outside the Lincoln Memorial, dramatically lit to underscore the gravity of the moment. Produced by the team that lifted the all-virtual Democratic National Convention to surprising heights, “Celebrating America” made for a technically impressive event, despite a few jarring transitions between live and pre-taped segments. (The cut from an elaborate trumpet fanfare to President Biden standing alone and somewhat startled by the Memorial made me laugh out loud, and the less said about Lin-Manuel Miranda’s recitation of a Seamus Heaney poem ending with his words morphing into Biden’s, the better.)

Notably, “Celebrating America” also made the most of its access. After four years of Donald Trump cycling through the same dozen or so Hollywood faithful who would speak up for him, Biden’s team wasted no time reminding the country of the Barack Obama years in which celebrities openly embraced the commander-in-chief as the embodiment of hope and change. As stated by performer after presenter after “everyday hero,” the theme that the Biden administration would like the public to take away from today is that the 46th president is here to bring America out of the dark into the light.

“Here comes the sun,” Bon Jovi warbled from atop a Florida boardwalk. “It’s times like these you learn to live again,” sang Dave Grohl, slowing down one of the Foo Fighters’ biggest hits to match the mood. “It’s a new dawn, it’s a new day, it’s a new life,” belted John Legend, covering Nina Simone through his broadest grin. A mega-mashup from quarantining Broadway stars turned “Rent” anthem “525,600 Minutes” into an almost frantically joyful group singalong of “Let the Sun Shine In” from “Hair.” By the time Demi Lovato was bopping to Bill Withers’ “Lovely Day” surrounded by clips of health care workers doing the same, the message of “Celebrating America” was almost too clear, and the smiles delivering it almost too bright.

Depending on who you are and where you’re coming from, your mileage will almost certainly vary. If you’re a stalwart Biden supporter, this special might have been the equivalent of a sigh of relief. If you’re a disappointed Republican, you might have watched this event purporting to unite the country and wondered why the only Republicans represented were George W. Bush, in an awkward scene in which former presidents advocated for common sense, and the words of Ronald Reagan, bizarrely framed as inspirational for all Americans who would consider themselves patriotic. And if you’re someone who just wanted to see Bruce Springsteen perform an acoustic set on the Lincoln Memorial steps, well, you were in luck.

For me, though, the most compelling moments of “Celebrating America” were the ones that didn’t celebrate America so much as try to eulogize the most recent version of it. The Springsteen performance that opened the night presented an immediately striking, restrained image of a man paying solemn tribute to a “land of hope and glory” he hoped might still be possible. Hanks, Legend and finale performer Katy Perry all appeared next to the rows of lights lined up before the Washington Monument in tribute to the more than 400,000 Americans who have, so far, died from COVID-19. So many people in and outside the special are doing their best to find hope and change at a time when both are in desperately short supply. As much as “Celebrating America” wants to turn its viewers’ attention to the sunlight that could break through, it’s impossible to deny the oppressive power of the clouds hiding it. For as much as the Biden administration wants this fractured country to come together in optimism for a better future, the truest unifying bond might be the powerful streak of sadness underlying our present.