Kevin Smith Apologizes to Bruce Willis Over Petty ‘Cop Out’ Complaints: ‘I Feel Like an A–hole’ 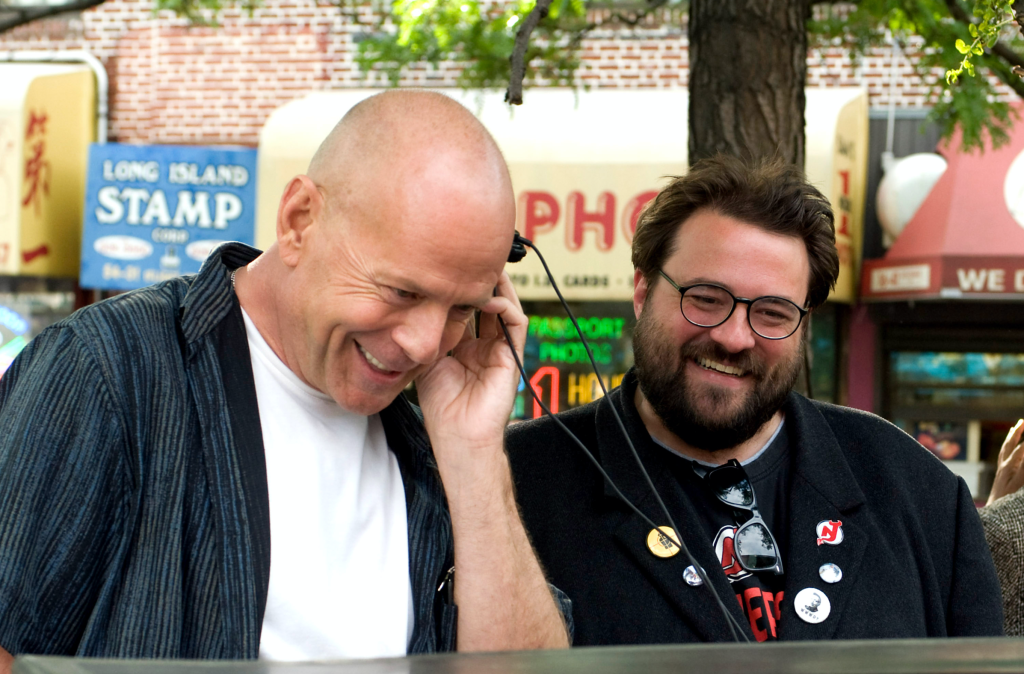 Kevin Smith reacted to the news about Bruce Willis’ acting retirement and aphasia diagnosis by saying he “feels like an asshole” for publicly slamming the actor over a decade ago. Smith directed Willis and Tracy Morgan in the 2010 buddy comedy “Cop Out,” but the director’s relationship with Willis was tumultuous. On a 2011 episode of Marc Maron’s podcast, Smith said “it was fucking soul crushing” working with Willis.

“It was difficult,” Smith said at the time about Willis. The director added that Willis “wouldn’t even sit for a fucking poster shoot” and that “were it not for Tracy, I might have killed either myself or someone else in the making of fucking ‘Cop Out.’”

Following the announcement that Willis is stepping away from his career after being diagnosed with aphasia, a language disorder caused by brain damage that affects a person’s ability to communicate, Smith joined other Hollywood stars in sending well wishes to Willis and his family.

“Long before any of the ‘Cop Out’ stuff, I was a big Bruce Willis fan, so this is really heartbreaking to read,” Smith wrote on Twitter. “He loved to act and sing and the loss of that has to be devastating for him. I feel like an asshole for my petty complaints from 2010. So sorry to [Bruce Willis] and his family.”

Willis’ family announced his diagnosis and retirement in a joint statement on social media. “This is a really challenging time for our family and we are so appreciative of your continued love, compassion and support,” the family said. “We are moving through this as a strong family unit, and wanted to bring his fans in because we know how much he means to you, as you do to him. As Bruce always says, ‘Live it up’ and together we plan to do just that.”

Actor Seth Green also reacted to the news on Twitter, writing, “I have so much love for Bruce Willis, and am grateful for every character he’s given us. Hugs and love for the whole family. Thank you for sharing him with us all.”

“Bless you, Bruce Willis!” wrote “Deadpool” creator Rob Liefeld. “Prayers for healing and sincere gratitude for sharing your talents with all of us!”

Read more Hollywood reactions to Bruce Willis’ retirement and diagnosis in the posts below.

Long before any of the Cop Out stuff, I was a big Bruce Willis fan – so this is really heartbreaking to read. He loved to act and sing and the loss of that has to be devastating for him. I feel like an asshole for my petty complaints from 2010. So sorry to BW and his family. https://t.co/npSgvkb5v7

I have so much love for Bruce Willis, and am grateful for every character he’s given us. Hugs and love for the whole family- thank you for sharing him with us all ❤️❤️ https://t.co/ct0HE1Ti2N

Damn. Wishing the best for Bruce Willis and his family. https://t.co/95AFvbOcnd

So much love, light, prayers, and strength to Bruce Willis, his wife, children, @justdemi and their entire family during this time.

Have faith, there is hope and incredible geniuses at Mayo Clinic and NIH who work in neurology & study brains. Breakthroughs truly happen every day

Bless you Bruce Willis! Prayers for healing and sincere gratitude for sharing your talents with all of us! https://t.co/maNEhLy8ul

Sending ❤️ and 🙏 to #BruceWillis his family & family. One of my close relatives has aphasia and she is still enjoying a happy, fulfilling life (but she also had to give up her career). It’s inconceivable to think of #Armageddon without his powerful and heartfelt performance. https://t.co/uy2FbrMDtJ

Queen Latifah has long been a trailblazer for women in the industry, transitioning from rapper to actor to producer to entrepreneur, while emphasizing the importance of having a seat at the table when it comes to business.

And with her latest venture, the Queen Collective — a mentorship initiative designed to give multicultural women directors a platform (and the financial resources) to get their projects made — the multi-hyphenate star is focused on providing young filmmakers a meaningful way to move up in Hollywood and change the nature of the industry as a whole.

“We’re talking about layers and layers and layers of systemic racism and classism that’s sort of like worked its way into every fabric of our society,” Latifah told Variety over the phone Thursday. “It’s not something that’s going to get dismantled overnight, but each person who has an opportunity to be their own boss and tell their story their way, gives you an opportunity to just see something through a different lens.”

It’s a powerful position that Latifah knows well, after co-founding her production company Flavor Unit Entertainment in 1995 and executive producing films since 2013.

“When you look at the stats of what happens behind the camera, how these women hire is also indicative of how we can solve the problem,” Latifah added. “Because they hire much more diversely, which gives opportunity and experience to various people of diverse backgrounds, so it continues to build the pool of people with experience that directors and producers will want to go to as they continue to work in our business.”

In another parallel, the Grammy-winner and Oscar-nominee embodied another trailblazer earlier this year, playing Hattie McDaniel (the first Black person to win an Oscar, for her performance in “Gone with the Wind” in 1939) in the Netflix limited series “Hollywood,” which imagined a more-inclusive vision for Tinseltown’s Golden Era. McDaniel’s name has been back in the headlines this week as HBO Max decided to temporarily pull “Gone with the Wind” from its lineup, a move that Latifah agrees is the right call. “We’re gonna have a lot of places where people have hiccups,” she explained. “It’s not just about the knee jerk reaction and get rid of you. No, it’s about ‘Okay great, let’s fix this and hopefully make it move forward.”

“Her story is an important story and unfortunately her story is not a unique story. There are so many actors of color that were treated so disrespectfully in her time and faced so many challenges,” Latifah explained. “Hattie McDaniel was gifted, but she was relegated to certain types of roles and when you have to decide between putting food on a table or playing a certain role, it is very difficult to make those decisions. And that’s the position a lot of Black actors were put in at that time … and that’s still been happening. It’s been happening up through the ‘80s and ‘90s for sure —you know, play a rapist in this role, play the mugger in this role, play the murderer in this role, or nothing at all.”

“It could happen again if we don’t say vigilant and make sure that our stories are told properly,” Latifah added. “Look at me, I am the example of breaking down walls. If you would ask any agent back at my agency back in the day — which literally my partner/manager Shakim [Compare] did — ‘Do you think Latifah can be an A-list actor?’ They said ‘No.’ And it was strictly based upon the fact that I’m Black, that I’m not skinny, that I’m not white, I’m not thin, I don’t have blue eyes. So, everything from that moment on was like, ‘Okay, we have to create this ourselves if it’s going to happen.’ And that’s what we did.”

Latifah explained that every creative move she’s made sense was about allying with forward-thinking partners who understand that there is a demand for stories by and about people who, like her, aren’t the “antiquated vision of what a Hollywood actress is supposed to look like.”

One such alliance was Latifah’s “Queen Collection” make-up line with Procter & Gamble’s CoverGirl, which ultimately led to the Queen Collective partnership between P&G, Latifah and Tribeca Enterprises. To celebrate the launch of the second year of the program, Paula Weinstein, Chief Content Officer of Tribeca Enterprises, and Marc Pritchard, Chief Brand Officer of Procter & Gamble, joined Latifah for a virtual discussion to explain how difficult it is to select just two films to produce out of the pool of 50-60 applicants.

“What that shows is how deep this community of creative voices are, who haven’t had a chance to make their films,” Weinstein said. “We can’t wait to get started again because there’s so much to say and so many extremely talented women to be saying it.”

Weinstein also got emotional while reflecting on what the program represents in what she called an “extraordinary” moment, as many in Hollywood openly commit to supporting the Black Lives Matter movement and address the industry’s own institutional racism.

“It’s just very moving,” she said, holding back tears. “About Queen — I have admired her for such a long time as an activist and as a woman who constantly has used her power to reach back and bring others along with her and that is the only way change happens.”

This year’s featured filmmakers are Samantha Knowles (whose film “Tangled Roots” centers on the fight against hair discrimination), Nadine Natour and Ugonna Okpalaoka (who co-directed “Gloves Off” — a story of a young African American police officer who is also a champion boxer). The two short films will exclusively premiere Saturday, June 13 at 9 p.m. ET on BET, followed by first two projects produced by the Queen Collective — “Ballet After Dark” (directed by B. Monét) and “If There Is Light” (directed by Haley Elizabeth Anderson).