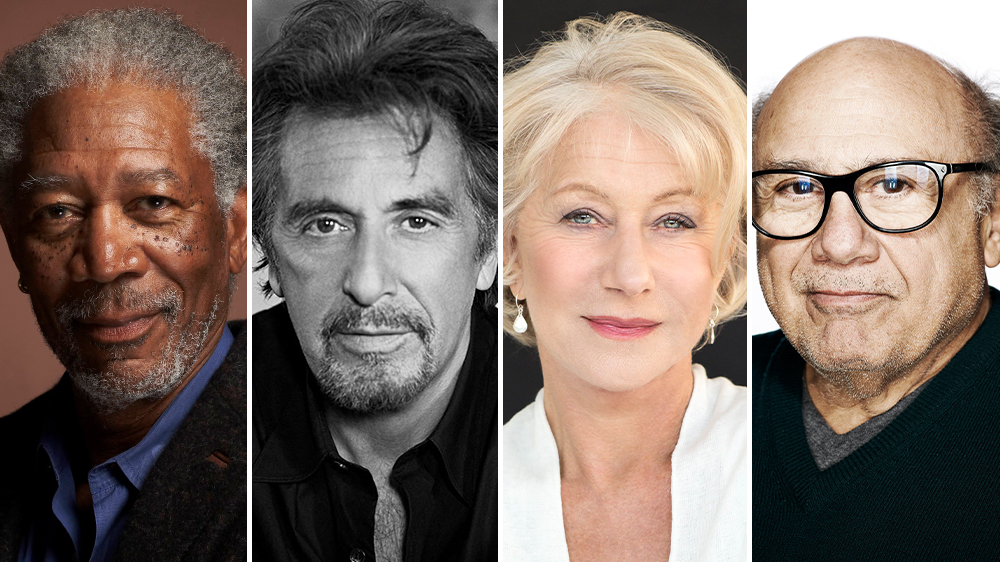 Morgan Freeman, Al Pacino, Helen Mirren and Danny DeVito will star in “Sniff,” a stylish reinvention of the film noir.

Helmed by Taylor Hackford, the Oscar-winning director behind “Ray,” the film follows detective Joe Mulwray (Freeman) and partner William Keys (DeVito) as they investigate a high-end luxury retirement community after the mysterious deaths of two of its residents. What starts out as a normal case quickly turns strange, as the detective duo uncover a hidden underworld of sex, drugs and murder controlled by senior living community kingpin Harvey Stride (Pacino) and his femme fatale enforcer The Spider (Mirren).

Adam Goodman and Matt Skiena will produce through their Dichotomy Creative Group alongside Hackford through his production company Anvil Films.

“I have always been a big fan of film noir but haven’t really made one,” Hackford said via Deadline. “The whole concept of setting a film noir in an upscale retirement community… these are proliferating all over the United States as the baby boomer generation gets to retirement. There’s a lot of money, and people want to live in a beautiful setting. Those are on the brochures, but what Tom Grey did was show what was lurking below the surface.”

Hackford added, “I thought it was a brilliant idea and he understood the nature of good noir — the dark story, the incredibly twisted characters — and I thought he had a great handle. Adam and Matt said, ‘It’s yours if you want to run with it.’ I met the writer, Tom Grey, we clicked and worked on it together, him writing and me putting ideas in.”

Betty McLeish (Helen Mirren) is a widow in her 70s who lives in a home full of tasteful pastel furniture in a calmly boring suburb of London. She’s sweet, pretty, pert, and polite, with glowing skin framed by an impeccable gray-white coif; if Doris Day had been a conventional middle-class Englishwoman, she might have looked and acted like this. The opening sequence of “The Good Liar” hops back and forth between Betty filling out the user questionnaire on a website called Distinctive Dating and the man she’s just met on the site doing the same thing. (They tell each other an impish lie or two, with Betty checking the box that says “non-drinker” between sips from her wine glass.) The tone is genial and spry, very senior-citizen “You’ve Got Mail,” and the film then cuts to Betty arriving at a posh London restaurant, where she and her date are meeting for dinner.

He walks in, looking like a hound dog in a trench coat, and sits down opposite her with his eyes a-twinkle. His name, once they confess that they’ve each led with a fake name, is Roy Courtnay, and he’s played by Ian McKellen as the tweedy essence of Old World fuddy-duddy British charm. Roy is the sort of man who’s so “sly” about being sly that he’s actually the opposite of sly. Their conversation gravitates to the inevitable letdown of Internet dating — to the disappointment that sets in when you see that the other person is so much less attractive and exciting than you were led to believe. This is the film’s way of hinting that the encounter that follows is going to be as layered as an onion. Yet Roy’s debonair earnestness and Betty’s homespun sparkle seem a nice match. If the movie weren’t called “The Good Liar,” we’d think: This could be the beginning of a beautiful friendship.

The two lonelyhearts say their goodbyes, and after telling Betty that he’s going to catch a subway home, Roy watches her go and murmurs, “Will you call?” He then jumps into a cab and orders the driver to take him to Stringfellows, the upscale London gentlemen’s club, where he’s ushered into a backroom. There, over goblets of Champagne, he holds court with several men, outlining a shady deal — a chance to invest 50,000 pounds apiece, with the quick possibility of doubling that investment. That some mysterious Russian nationals are involved only makes the deal sound sketchier. But whatever’s going on, one message could hardly be clearer: Roy is not what he seems.

“The Good Liar” is adapted from Nicholas Searle’s 2016 novel (the script is by Jeffrey Hatcher), and it has been directed, by the gifted and eclectic Bill Condon (“Beauty and the Beast,” “Kinsey,” two “Twilight” films, “Gods and Monsters,” “Dreamgirls”), as a delectably clever and civilized entertainment that invites us to be as invested in the game as we are in the characters. The way the movie works, Mirren plays Betty not as a sap but as a smart woman of solid values, whose trust in people is a projection of her own good nature. Mirren gives her an incandescent decency, even as she satirizes the slight blandness of Betty’s dreams.

Yet even as we don’t want to see Betty get hurt, it would be too easy to say that “The Good Liar” puts us on her side. Though we recognize that Roy is a scoundrel, we’re drawn to his amoral cunning — to the way he fakes a gimpy leg so he can stay over at Betty’s place, or makes himself such very good tea-time company, or bilks those investors with a scam so elaborate that you’re not sure whether to recoil or applaud.

Roy is a con artist, with a courtly personality that’s a total fraud, and the truth may be even darker. (As we learn, he’s got the killer street instincts of a man decades younger.) Yet just as Hitchcock, in “Shadow of a Doubt,” got the audience to identify with Joseph Cotten’s lethal Uncle Charlie, “The Good Liar” draws us into Roy’s web, so that we watch with a coldly admiring fascination as he sets his traps.

Betty’s son, Steven (Russell Tovey), a boyish lawyer who’s crashing at her place for a bit, is onto Roy. Or, at least, he senses there’s something too-chivalrous-to-be-true about him. So he needles him, picking at his façade, without any sense of what’s under it. The closer his mother gets to Roy, the more it irritates Steven, a situation Roy exploits to make the tension look like jealousy. Roy and Betty’s relationship has a gentle air of romance about it, yet it’s essentially a companionship; it’s even platonic. (Having lost her husband three years ago, Betty says she’s not ready to take that plunge.) Even so, when Roy takes advantage of their newfound intimacy to start talking to Betty about her financial security, introducing her to Vincent (Jim Carter), his beetle-browed money adviser, she starts to seem like an awfully easy mark.

The pleasure of “The Good Liar,” and it’s a major one, is the chance to watch Mirren and McKellen act together in a cat-and-mouse duet that turns into an elegant waltz of affection and deception. He plays Roy as a man who has buried all his feeling, but it comes gushing up anyway, and she plays Betty as a woman who’s all heart-on-the-sleeve trust, which turns out to be her own devious leverage. At one point Betty and Roy take a trip to Europe, and it’s in Berlin that his façade begins to unravel. But only a bit.

We’re used to movies about con artists turning into shell-game entertainments, like the “Ocean’s” films or David Mamet’s trap-door thrillers. But “The Good Liar” turns out to have a more serious upshot than you’d expect. There’s a backstory, set during World War II, and it’s all about abuse, survival, misogynistic crime, and the seeds of a sociopath. It all adds up, yet you may feel that the too-wicked-for-words caginess that was so appealing in the film‘s first half didn’t need to be leavened with the furrowed brow of historical reckoning. (You may also find that the plausibility factor gets a bit too stretched for comfort.) In the end, the true subject of “The Good Liar” isn’t con artistry but vengeance. And that’s just enough of a turn of the screw to make you want to see the whole thing again.