Vin Diesel had plenty to celebrate on Saturday night.

Not only did he place the winning bid of $70,000 for two court side seats at a Clippers game and a Breitling watch at a benefit for Charlize Theron’s Africa Outreach Project (CTAOP), but “F9: The Fast Saga” broke the weekend box office record since the onset of the pandemic. Variety’s Rebecca Rubin reported that the latest installment of Universal’s “Fast & Furious” franchise brought in $70 million from 4,179 North American theaters, unseating the $48.3 million record set by Paramount’s “A Quiet Place Part II.”

“I think what feels best is just the idea that people are returning to the theatrical experience,” Diesel told me at the CTAOP event. “It feels good to say, ‘Cinema is back!’”

Diesel praised Universal for going all-in on a theatrical release, without also sending the film to streaming. “You can’t fault another studio for wanting to stream a movie, but the ones like Universal are bold enough to say, ‘Hey, we’re going to support the theatrical release,’” Diesel said. “I take my hat off to them.”

Theron, who returns in “F9” after making her “Fast & Furious” debut in the eighth entry, said, “It’s amazing. Just thinking about the fact that they’re on their ninth movie, that’s pretty impressive. It’s a perfect movie to help us come back.”

Franchise regular Jordana Brewster agreed: “It’s really nice. It just feels good to be back in the theater — period!” 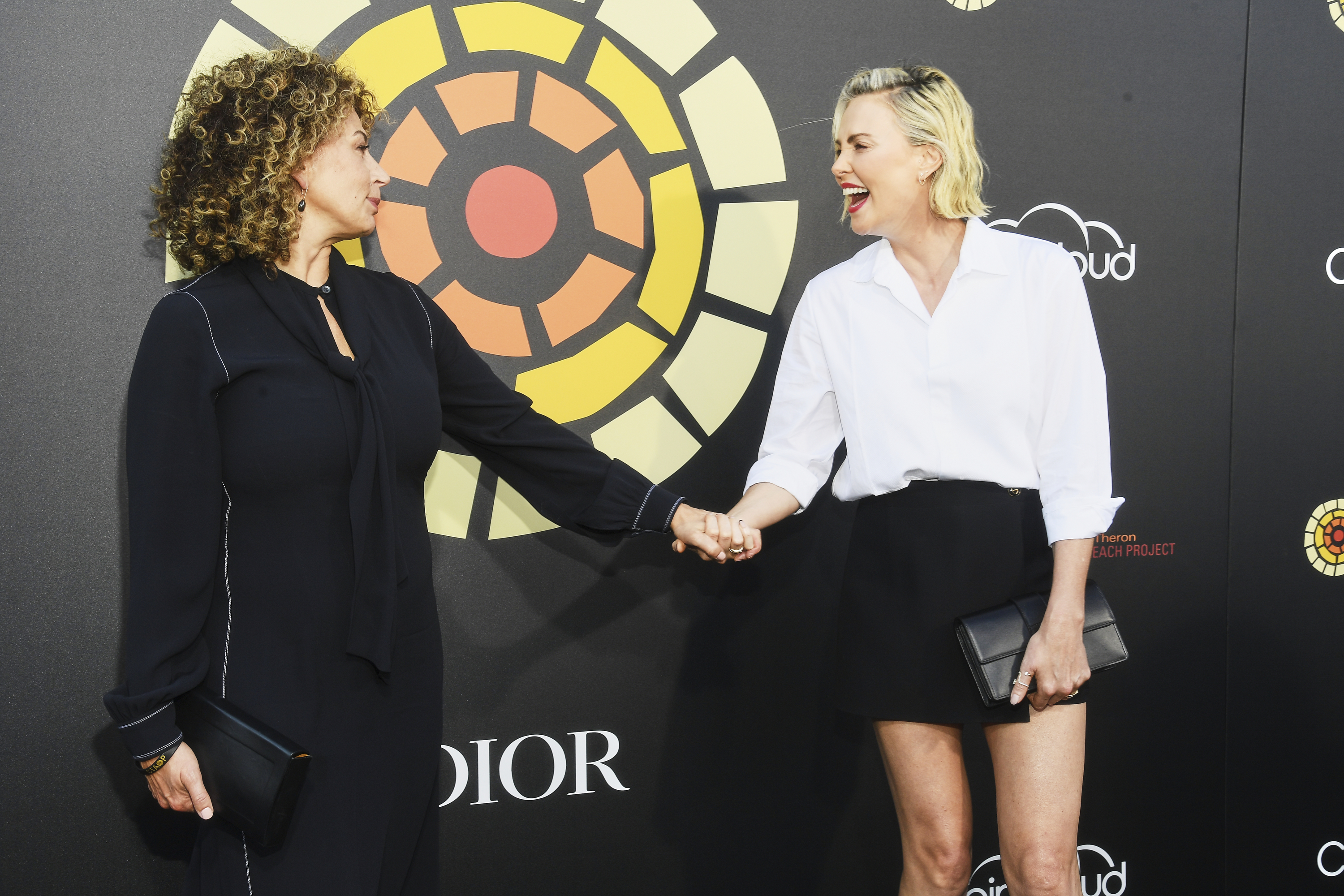 The CTAOP fundraiser, produced by CH Cre8tive, follows its last outing in August 2020, which included a drive-in screening of “Mad Max: Fury Road” on top of the Grove parking structure and a Q&A with Theron and co-star Nicholas Hoult. Saturday’s event was a mask-less get together on New York Street on the Universal Studios Lot. A screening of “F9” followed a Q&A with Theron, Diesel, Brewster and director Justin Lin moderated by Paul Scheer and June Diane Raphael.

“We really had to put our heads together last year, but it was such a successful night that we realized we needed to do a version of that again,” Theron said. “I don’t think people want to sit in dark [ballrooms] anymore. There’s also the connective tissue. Our programs work with young people, so we have to create a night that’s fun.”

CTAOP works with African youth to keep themselves safe from HIV through various health, education and community initiatives.

The live auction included Universal Pictures boss Donna Langley bidding against entertainment attorney and “We’re Here” co-creator Steve Warren for a five-star trip to Italy. Warren won the package for $30,000. Apparently not knowing who Langley was, the auctioneer asked what her name was and also tried to get her to bid higher by calling her “baby girl.” 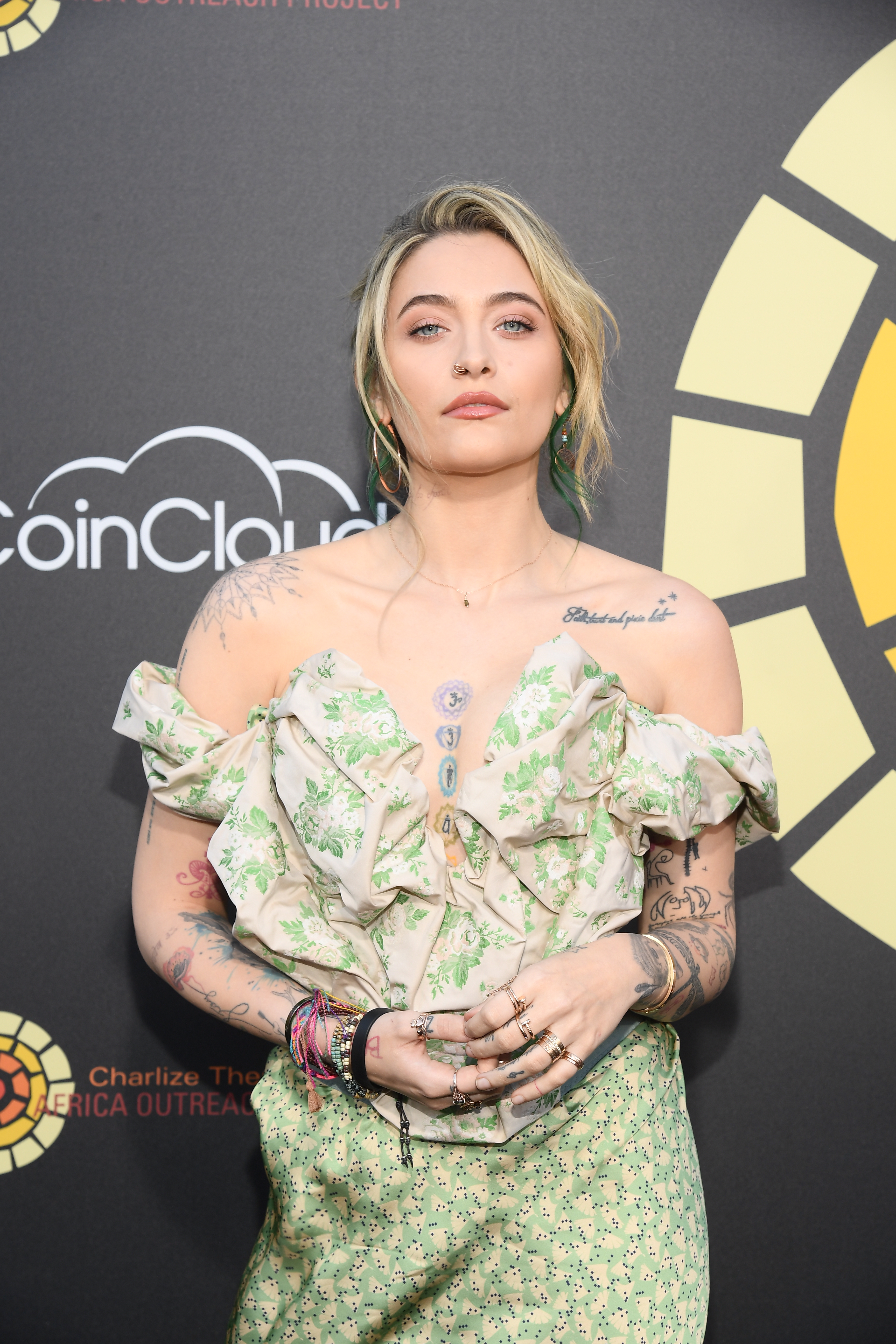 A usually press-shy Paris Jackson told me, “I really look up to Charlize because she’s so inspirational, and I hope to one day be like her with my philanthropic type of work.” 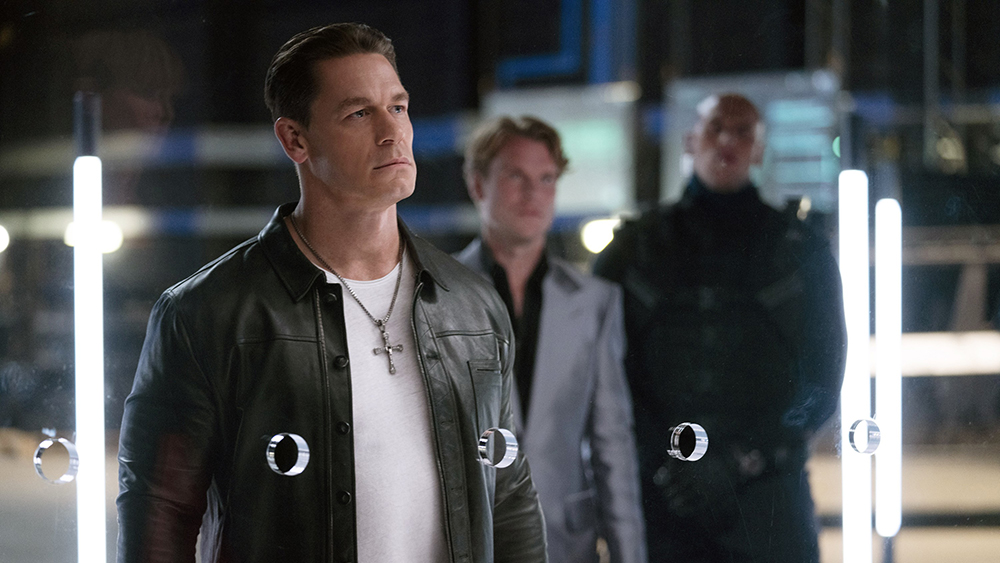 “F9” is racing towards a pandemic era box office record after nabbing a mighty (at least for plague times) $7.1 million in Thursday previews.

The homage to living life “a quarter-mile at a time,” in the words of one Dominic Toretto, is providing a welcome dose of adrenaline to a cinema business that’s been stalled out for months, as audiences slowly creep back to multiplexes and vaccination rates continue to rise. It is expected to gross between $60 million to $70 million in North America this weekend, which would easily top the $48.3 million that “A Quiet Place Part II” brought in over its first weekend in theaters. That was the high-water mark for domestic debuts in the COVID era.

“F9” brings back Vin Diesel as Toretto, as well as fellow crew members Michelle Rodriguez, Tyrese Gibson, Chris “Ludacris” Bridges, Nathalie Emmanuel, Jordana Brewster and Sung Kang. Jon Cena plays the villain, while Helen Mirren chews scenery and shows she can do a lot more than parallel park as Deckard and Owen Shaw’s mom, a role she has previously played in other “Fast” films. Justin Lin, who helmed “Fast & Furious 6,” slid back into the directing chair on this one. 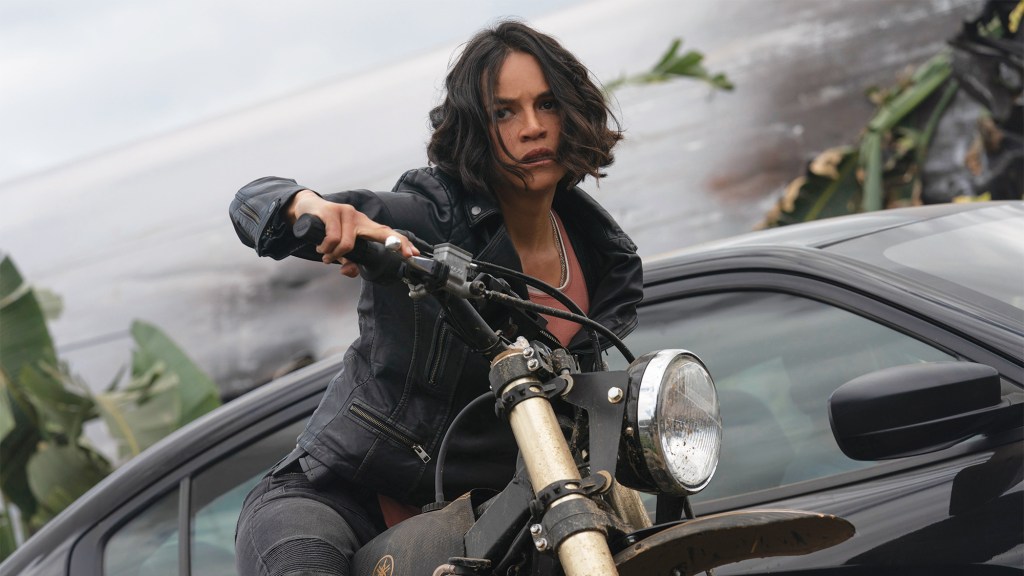 “F9” became the most-watched foreign film in South Korea since the beginning of the COVID-19 pandemic on another weekend where Hollywood and Japanese titles dominated the South Korean box office.

The weekend box office chart was headed by “Cruella,” which held strong in its third frame and swapped places with newer “The Conjuring: The Devil Made Me Do It.”

“Cruella” scored $1.82 million according to data from Kobis, the Korean Film Council’s film tracking service, down just 17% from its second outing. Since release on May 26, “Cruella” has accumulated $8.29 million.

“F9” slipped another gear and shifted down from third place to fourth with $746,000 over the weekend. But its racy performance now makes it the biggest film of 2021 in Korea. It has accumulated $18.9 million from 2.19 million ticket sales since release on May 19.

In doing so, it has overtaken “Demon Slayer The Movie: Mugen Train” and “Soul” the previous top-scoring films of 2021. It is also ahead of “Tenet,” the previous post-pandemic front-runner among imported titles. The top titles in Korea since the pandemic are both Korean – “Peninsula” and “Deliver Us From Evil” – both with more than three million tickets sold.

(“The Fast And The Furious,” the fist film in the franchise, will be re-released in Korea on Wednesday in a 4D version with 3D and added atmospheric effects.)

Japanese animation title “Earwig And The Witch” was released on Thursday and took fifth place on the weekend box office chart, albeit a significant distance behind the front four. It earned $135,000 between Friday and Sunday and $153,000 over four days.

Previews of “A Quiet Place: Part II” were good enough to give the film sixth place. It has now earned $131,000, ahead of its official June 16 release.

“Demon Slayer” placed seventh with $74,000 on the weekend, for a cumulative of $18.2 million since reaching Korean screens in late January.

The top Korean-made film was “Pipeline” in eighth position. It earned $30,700, tipping its cumulative over $1 million in its third weekend since a May 26 release.

Distributors of locally-made films have been hesitant to commit to release dates at a time when Korean audiences this year have appeared nervous about in-person screenings. That has meant that Korean cinemas have not participated in a box office recovery being enjoyed in other parts of the Asia-Pacific region.

Without compelling local titles, the box office in Korea has failed to rebuild strongly. And this weekend’s $5.63 million nationwide aggregate is the fourth highest weekend total of 2021.

The contrast between the approaches of the Korean titles and the Hollywood releases is notable. But a crucial difference is that whereas the Hollywood titles are opening as part of wider, international release campaigns, the local films still rely heavily on their home market and failure at the box office would be costly.

Several theaters across Korea have been closed and exhibition chains are creaking. In the last few days, number two chain Lotte announced its second ticket price increase of the pandemic era. It is adding KRW1000 ($0.90) to ticket prices, meaning that tickets sold at the weekend will cost KRW14,000 $12.55) apiece from July 1.

The company, which was loss-making in 2020 and the first quarter of 2021, previously increased turnstile prices in December and again it argues that it needs to improve revenues in order to survive. Marker leader, CJ-CGV raised prices in October 2020 and April 2021.

Korean films could be back next month. Lotte recently reported that its Ryoo Seung-wan-directed “Escape From Mogadishu” will open this summer. Next Entertainment World says its “Hostage: Missing Celebrity” is also eying a summer holiday release. 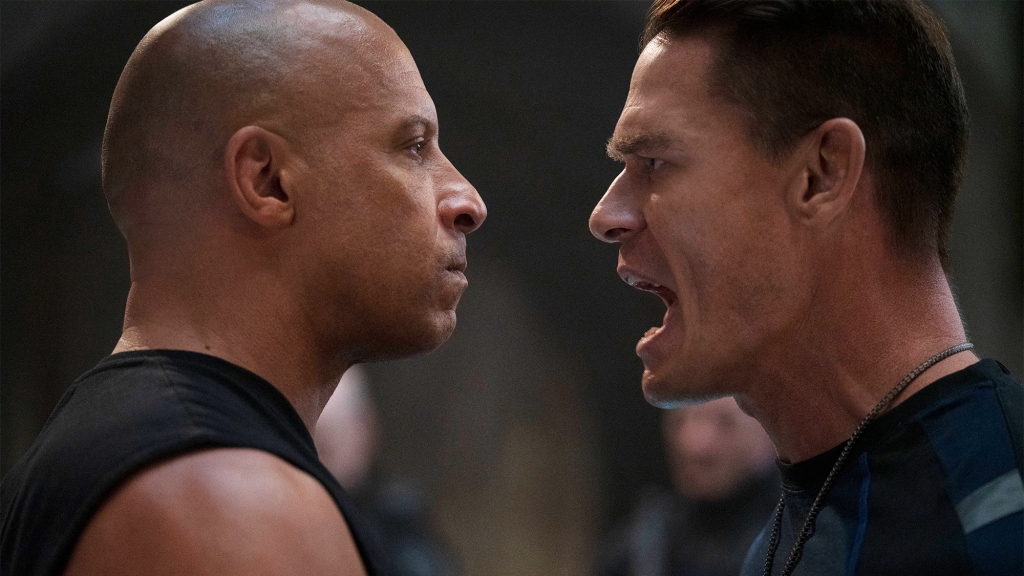 The latest installment in Universal’s testosterone-fueled franchise kicked off with a massive $162.4 million in eight markets, including China, Korea and Hong Kong. Those ticket sales easily mark the best opening weekend for a Hollywood blockbuster since the pandemic began.

“F9” collected $135 million in China alone, ranking as the second-biggest start for the series in the country following the eighth entry, 2017’s “The Fate of the Furious” ($184 million). In another notable milestone, it’s the first Hollywood title since Disney’s “Avengers: Endgame” to debut to more than $100 million in China.

With this weekend’s $162.4 million haul, the “Fast” franchise has pushed past $6 billion globally. “F9” is deploying a staggered rollout across the world as the globe recovers from the pandemic. It touches down in the U.S. on June 25 and will open in 60 additional markets over the summer.

It was much quieter at the box office in North America, where the gruesome horror film “Spiral,” action adventure “Wrath of Man” and wilderness thriller “Those Who Wished Me Dead” presided over the competition.

Without any new nationwide releases, “Spiral” remained in first place with $4.5 million from 2,991 screens in its second weekend of release. The movie, a creepy addition to the “Saw” franchise that stars Chris Rock and Samuel L. Jackson, has generated $15 million in the U.S. to date.

In second, “Wrath of Man” collected $2.9 million from 3,007 theaters. After three weeks on the big screen, the Jason Statham-led vigilante flick has amassed $18.8 million.

Ticket sales for “Those Who Wish Me Dead,” starring Angelina Jolie, dipped 35% from its opening weekend. The film brought in $1.8 million from 3,379 venues between Friday and Sunday, boosting its total haul to a bleak $5.5 million. The Warner Bros. movie, like the studio’s entire 2021 slate, is currently playing on HBO Max and will remain on the streaming service for 31 days in total.