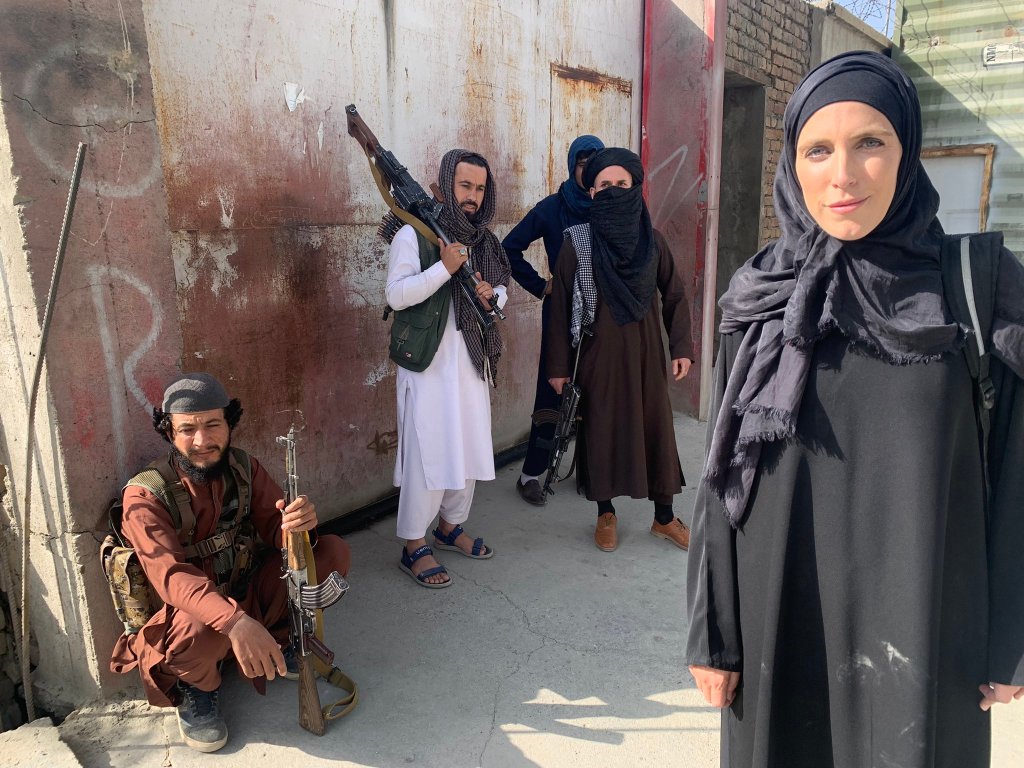 One day while broadcasting from Afghanistan for CNN, Clarissa Ward may have moved about a little more  freely. On another, she wore traditional dress for women in that region — covering her hair with a head scarf and a traditional abaya — and was asked at one point on camera by members of the Taliban to stand to the side because she is female.

“The Taliban are telling us they are here to maintain order, that people are safe, and that nobody should be worried; but we have seen fighters also chanting ‘death to America,’’ says Deborah Rayner, CNN’s senior vice president of international newsgathering, in responses to questions delivered via email. “Right now, many people — especially women — are staying inside, waiting to see what happens, while we hunker down at night to the sound of helicopters and gunfire.”

The WarnerMedia outlet’s chief international correspondent is just one of several journalists navigating a quickly-changing landscape. Roxana Saberi, a CBS News foreign correspondent, has been reporting from Kabul, as has Richard Engel, chief foreign correspondent for NBC News. All three face a chaotic scene: a country that is being taken over by a more fundamentalist regime that has less tolerance for reporters from American outlets, and less interest in talking to female operatives who are accustomed to equal treatment in their professions. Even so, their work may provide some of the most compelling content on TV over the next several days.

The Society of Professional Journalists has already called for attention to the journalists’ plight, as well as to Afghan citizens who may have worked for them as drivers, fixers or translators. “The world is watching, with knots in our stomachs and no idea what it feels like to be in that horrible situation,” said Matthew T. Hall, national president of the organization. “But we know what it looks like because of the work of so many journalists and citizen journalists. I am heartbroken about the swift change in circumstances in Afghanistan in the past week and hoping that peace and press freedoms prevail and that journalists are protected so the world can continue to pay attention to what is happening.”

On Monday, the Wall Street Journal, New York Times and Washington Post sent a request to White House asking for help in getting more than 200 journalists and others related to working for their organizations to safety. “As employers, we are looking for support for our colleagues, and as journalists we’re looking for an unequivocal signal that the government will stand behind the free press,” the organizations  wrote.

Ensuring stable conditions for employees has been paramount, even as they work to cover unrest in the region. “The safety of our employees is our top priority as we work to serve the public interest in reporting on the ground in Afghanistan,” CBS News said in a statement. “We’re actively monitoring the situation in Kabul and working with our colleagues in other news organizations to protect our journalists and all of those assisting the US news media reporting this unfolding global story.”

CNN is relying on experienced operatives in Kabul, and is trying to keep tabs on a country that continues to shift, says Rayner. “We know the city, we know the key players, and we know the warning signs to look out for. Most importantly, we have an exit strategy that is constantly under review, literally hour by hour,” she says. “Right now, as Clarissa Ward has noted on air today, the Taliban have been treating our crew cordially and allowing us to go about our business.  But we know how ruthless the Taliban can be, and we are also aware that there are other groups in Kabul and that the situation is incredibly fluid.”

In the meantime, there’s plenty to chronicle. “One key thread is of course what this new reality means for normal Afghans, particularly women and girls,” she says. “We want to know what the Taliban’s next move is now that they have assumed control. We want to see how they will treat those involved with the previous regime and those who worked with the United States, NGOs, the international media, and so on.

“Perhaps the biggest question of all is what a Taliban-controlled Afghanistan means for international security, which goes back to the whole reason the U.S. and its allies were in the country to begin with.”

Not knowing who’s in charge in each area makes the endeavor a delicate one. Moments of transition can give rise to looting, “even acts of sheer desperation that can make things dangerous. We simply don’t know who is entering the city alongside the Taliban. We know there are ISIS and Al Qaeda elements remaining in Afghanistan, for example. As international security forces leave, the landscape changes minute to minute, so we need to be extremely alert and aware,” says Rayner.

Journalists on the ground like CNN’s Ward will continue to maneuver through the country as long as doing so is feasible.

From the publishers of The Washington Post, The New York Times and The Wall Street Journal: pic.twitter.com/RQLH5QzHmo