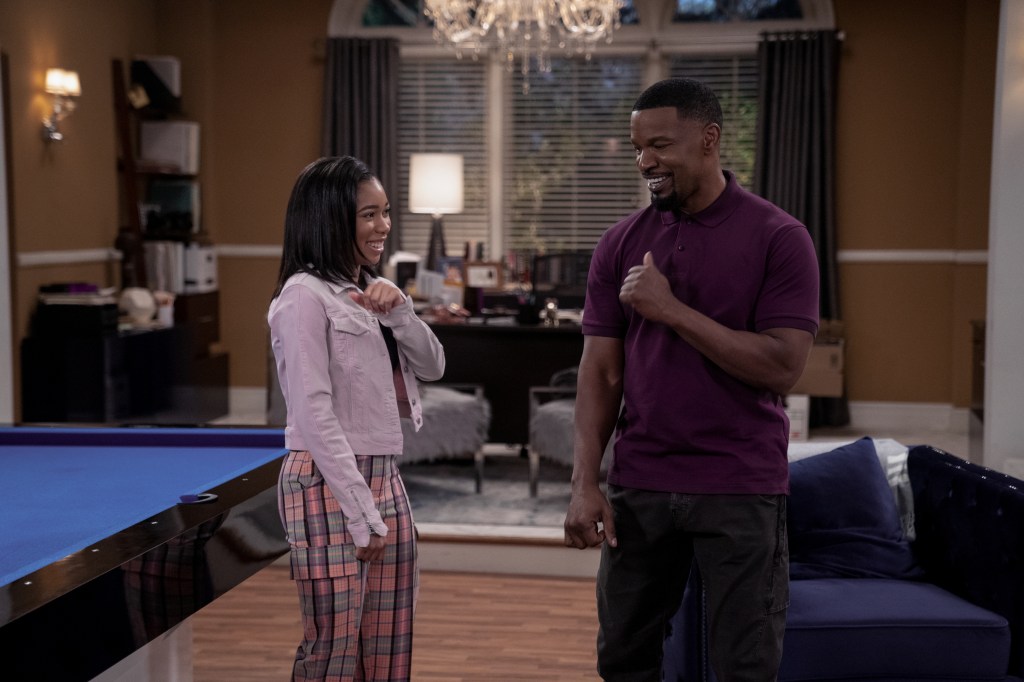 “Dad Stop Embarrassing Me!” isn’t exactly trying to reinvent the multi-cam sitcom wheel. The new Netflix comedy, starring and executive produced by TV veteran Jamie Foxx, follows single Atlanta entrepreneur Brian (Foxx) who suddenly has to father his teenage daughter Sasha (Kyla-Drew) after her mother’s untimely death, much to their mutual wariness. Brian’s eagerness embarrasses Sasha, Sasha’s stubbornness frustrates Brian; rinse, wash, repeat. Despite some strategic TikTok references and every episode title taking the form of a hashtag, there’s not much about “Dad Stop Embarrassing Me!” that anchors it to 2021 beyond the fact that it is executive produced by Foxx and his real-life daughter, Corinne Foxx.

In the long tradition of sitcoms about chaotic people randomly inheriting children, Brian’s not totally alone. His independent sister Chelsea (Porscha Coleman) plays the crucial role of Sasha’s fun and worldly aunt, while his wacky father (Foxx’s former “In Living Color” co-star David Alan Grier) keeps things weird through his hefty beard and haze of (legal!) marijuana smoke. Rounding out the cast are Heather Hemmens as Stacy’s, Brian’s righthand woman and erstwhile love interest, Valente Rodriguez as lackadaisical handyman Manny, and Jonathan Kite as Johnny, Brian’s best friend from high school who’s currently a cop (if a completely useless one, per the show’s insistent punchlines). It takes a village, or at least a motley crew of misfits, to raise a teen.

Directed by sitcom staple Ken Whittingham and showrunner Bentley Kyle Evans, “Dad Stop Embarrassing Me!” sticks to the multi-cam basics. There’s no joke that can’t be followed with a slapstick exclamation point, nor any point that can’t be emphatically underlined with an exaggerated reaction from an unseen audience. Characters even turn to the camera to address the viewer directly — a device the show uses either sporadically or constantly, depending on the episode.

There’s almost something soothing about how predictable it is, right down to the dusty punchlines threaded throughout every scene. (Just one example: when Brian walks in on Chelsea and Johnny in a compromising position at a party for his business, he exclaims, “I came in here to get my business cards, not to find you giving my sister the business,” to which Johnny replies, “you said it was a pop up!” with a practiced “who me?” grin.) Even when the jokes are weak — and they most often are — they’re straightforward enough to let the cast, particularly the consistently good Grier, riff in a halfway compelling way.

With only eight episodes for its first season, “Dad Stop Embarrassing Me!” wastes little time dealing with the aftermath of its emotionally wrought premise. Sasha’s mom is mostly a footnote; we have no idea how she and Brian met, who she was as a person, or what her and Sasha’s life looked like before she died. Most of this first season, in fact, feels like a second season for how quickly it dives into Sasha and Brian’s new life together. Sasha even makes a best friend in Johnny’s daughter Zia (Miracle Reigns) offscreen.

There’s something to be said for a sitcom fast-forwarding through inconvenient setup, which can often hold new comedies back from letting the cast and stories fully gel. But it’s also telling that the strongest episode is the second (“#Godastamaste”), in which Sasha refuses to go to church because, as she finally confesses to Stacy, she can’t understand why God would take away her mother. Letting Sasha have some space to acknowledge the tragedy that brought her to this point isn’t necessarily a laugh riot, but it at least makes the family feel the most organically like a family than at any other point. It’s too bad the rest of the show is too desperate to get to the guaranteed laughs to find more of these singular moments that could, given the room, make “Dad Stop Embarrassing Me!” more than a regurgitation of sitcom tropes past.