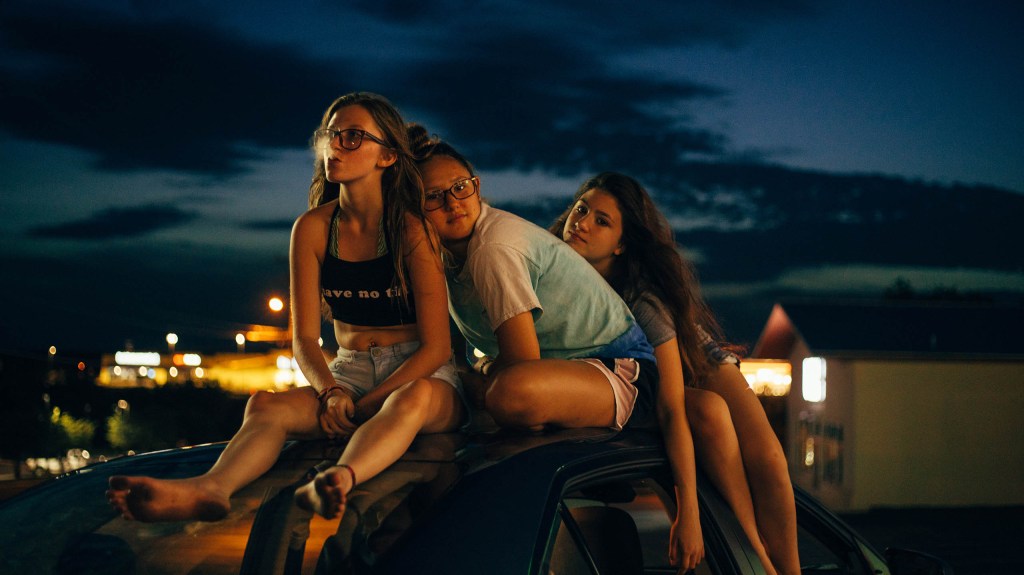 The youth party culture, as portrayed in the mass media, tends to be driven by a certain debauched and glamorous energy: the clubbing, the drugs, the “freedom,” the your-life’s-a-soap-opera excitement that turns the rituals of hooking up into a flame that lures everyone. But in “Cusp,” a documentary about three small-town Texas teenagers wiling away the summer, the party imperative may be just as compulsive, but it’s the scaled-down, middle-of-nowhere version, where a party is a bonfire and a bunch of dudes standing around with beer and blunts and a jug of moonshine and whatever girls they can get to show up. It’s a slovenly frat house without walls. So unlike the average party you’d see on a reality show, it actually looks as selfish and dangerous as it is.

“Cusp,” the first feature directed by Parker Hill and Isabel Bethencourt, is a documentary hang-out movie — an intentionally discursive and lyrical ramble. Autumn, Brittney, and Aaloni, who the film follows with an engagingly open-eyed and rather haphazard intimacy, live in (and for) the moment, because no one’s ever taught them to do otherwise. They know when they’re heading into fraught situations (their one protective weapon is their phones, which they wield like tiny glowing pieces of armor), but that’s just what they think they’re supposed to be doing. They’re trying to lend an edge to their meandering existence. It’s the siren song that half a century of sex-drugs-and-rock-‘n’-roll keeps whispering in their ears.

They’re all 15 or 16 years old, and for girls who don’t appear to have a lot of self-knowledge, they’ve been schooled, often in the cruelest way possible, in the forms that sexual violence can take. They speak openly about it. Autumn, who lives with her single father (but whose long-gone mother, she says, allowed her to be abused by acquaintances), says that girls “feel like they’re forced into it. They’re scared to say no.” “Why?” asks one of the filmmakers. “Guys are powerful.” She says it bluntly, with daunted matter-of-factness, but part of the devastation of her words is what Autumn takes for granted: that her society isn’t there to protect her.

And then we meet the guys they’re talking about, and we get scared all over for them. “Hey, let’s be honest,” says one dude, talking about an incident that involved his “problematic” buddy. “She was intoxicated and he was intoxicated, too. It’s not rape if they’re both intoxicated.” Then he adds, totally contradicting himself, “But we know how he is.”

In this casual firelight monologue, we hear the thing that “Promising Young Woman” captures so indelibly: the male clannishness that’s built around the pathology of shielding “bad behavior” (that is, nonconsensual behavior). The language itself is a cover-up. The girls talk about how these dudes will reassure them that they’d never sleep with anyone as young as they are. Too often, though, it’s a promise they’re more than ready to violate. The film’s message is: These girls believe, in their bones, that they will not be listened to. And who’s to question that? They’re speaking from experience. They have the wounds to prove it.

In “Cusp,” we’re seeing three girls in a highly specific setting — a Texas town where teenagers play with machine guns, and where the lack of supervision is at once economic and spiritual. No one seems to have time to look after their kids, but the parents we meet don’t have much inclination to either. Aaloni, who has a warmth about her (and a wicked sense of humor), comes from a family flecked by rage. Her father, a military man, is a PTSD sufferer (we never see him, but we hear him go into an off-camera tantrum about his two daughters, and it’s scary), and her mother, too, has a short fuse. Brittney, all smiles, but beneath that the most blitzed and disaffected of the three, says, “I don’t know how better this can get. I party every day, and get drunk. Gives you something to do.” Autumn, acerbic with self-doubt, finds stability in Dustin, a boy who seems to care for her, but when he dumps her out of the blue her identity seems to crumble out from under her.

“Cusp” was shot by the two filmmakers, and it has an incredibly striking look, like “Hale County This Morning, This Evening” with even more gorgeous magic-hour purple sky; it’s blinkered teenage nihilism set against a paradise no one bothers to notice. The movie is anecdotal: a day at the beach, a saunter down the road; Autumn on her back stoop, doing a painting of Texas, thinking it’s “too dark” but her dad thinks it’s beautiful; deer gathering at night; the girls plucking each other’s eyebrows (painful); a home nipple piercing (even more painful).

Watching “Cusp,” I was struck by a spiritual overlap between this movie and “Streetwise,” the classic 1984 documentary about homeless street kids in Seattle. Those kids had less than nothing. The girls in “Cusp” have homes, families (however fractured), and, in the end, a return to public school. They are not necessarily unhappy people. Yet what keeps jumping out at you is the no-future quality they have, the acceptance of power and aggression as the truest of connections, and, just maybe, the lack of a dream. You want to check back on them in five years, when you hope they’ll find a faith to outweigh their alienation.