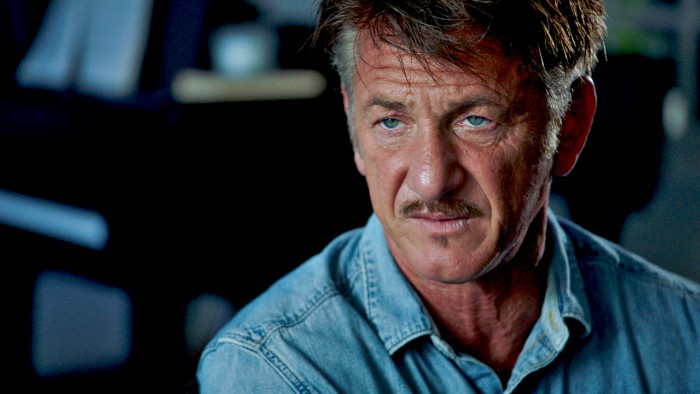 “Citizen Penn” opens in Hollywood in 2019, with Jamie Foxx, in high spirits, introducing Sean Penn at a benefit gala for Haiti. It doesn’t take long for the spirits to come crashing down to earth, as Penn, founder and spokesman of the J/P Relief Organization, hits the audience with a Debbie Downer buzzkill. The Russians, he says, are testing hypersonic nuclear weapons; populist demagogues are turning the world economy into a game; and climatologists, warns Penn, give us 11 years before “global catastrophic failure.” He adds, “Lies, greed, rage, sexism, and racism threaten to induce further violence in our own streets.” But then, just as you’re getting ready to see people streaming toward the exits, something funny happens. Penn says that it’s the cardinal rule of fund-raising not to bum out the crowd. He then spreads his hands and grins, acknowledging that’s what he just did.

That he can be so deadly serious is very Sean Penn; that he can laugh at himself about it is also very Sean Penn. “Citizen Penn” is a documentary about Penn’s life as an activist — specifically, his decade-long mission to improve life for the people of Haiti — and if you go into it thinking that you’re going to be rolling your eyes at the ultimate self-deluded celebrity do-gooder, the movie may stop you in your tracks. As “Citizen Penn” demonstrates, Sean Penn’s activism isn’t for show. It’s for real.

Yet you’d be forgiven if you needed a bit of convincing. The template for Penn’s extracurricular missionary zeal has always been: He walks the walk, instead of just talking the talk. Where other celebrities preach about saving the world in self-righteous signifiers, he takes action by going on the scene (to Baghdad during the Iraq War, to New Orleans during Hurricane Katrina, to Haiti after the catastrophic 2010 earthquake), and by staying there long after the disaster-relief-volunteer-as-photo-op window has closed.

In Haiti, we see him set up a sprawling tent hospital that serves thousands of people and saves many lives. He works 20-hour days for months, appearing periodically on Anderson Cooper’s nightly CNN broadcast, but also staying long after the cameras have gone. The organization he founded has hung in there for a decade, raising money, coordinating volunteers, helping to rebuild the country.

Yet “Citizen Penn” does acknowledge, without making too big a deal of it, that there’s a way that Sean Penn’s trouble-spot dedication can dovetail a little too exquisitely with his image, creating a kind of aging-James-Dean-of-the-killing-fields persona. The question that may occur to you watching “Citizen Penn” is: When Penn goes on his missions, is he leaving Sean Penn the movie star behind? Or is he creating the ultimate real-world Sean Penn movie?

In “Citizen Penn,” the film’s director, Don Hardy, interviews Penn sitting at home in what appears to be a downstairs rec room with a guitar and a grand piano and wall-to-wall carpeting that looks like teal AstroTurf. The actor himself cuts quite a figure, with his denim shirt and Brillo-pad hair and mustache that makes it look like he’s still trying to play some knockoff of Rupert Pupkin. He smokes incessantly (American Spirits), which is one of those used-to-be-cool-but-is-now-so-uncool-that-it’s-actually-cool Sean Penn things, and you can hear his devotion to the smoking in his voice, which is gravelly, with a bit of a quaver to it. He’s 60, and that’s a lot of years of hard living, but once you get past the studiously disheveled Penn trappings, he’s remarkably articulate and informed and compelling to listen to. He makes the case for taking action, and doesn’t explain why he feels compelled to. It’s written all over his weary-rubbery face.

“We were an airplane that built itself after takeoff,” he says of the J/P Haitian Relief Organization, which was ultimately renamed CORE. “That’s a perilous ride in so many ways.” Penn was mocked by many for cozying up to the late Venezuelan president Hugo Chávez (a socialist with dictatorial tendencies), but whatever your view of Penn’s visit to Venezuela, he wound up asking Chávez to provide 350,000 bottles of morphine for emergency medical relief in Haiti, and Chávez came through. (These were drugs needed to ease the pain of amputations, among other things.) Penn fought to keep the tent hospital standing, he worked hand in hand with the U.S. military, he helped to relocate the adjacent refugee camp when it was threatened by mudslides, and he secured the funds to clear literally miles of earthquake debris from the streets of Port-au-Prince.

Some of this is stirring stuff, and all of it is worth learning about, but as a documentary “Citizen Penn” is more diligent than riveting. It may sound perverse to say that the film doesn’t have much in the way of a dramatic conflict, but a good documentary often needs one, and Penn’s ongoing mission of mercy in the impoverished hellscape that Haiti, for a time, became is presented as a series of battles that are met, fought, and (mostly) won. Penn keeps saying, in essence, “It’s not about me.” Yet the whole reason we’re watching this movie is that it is about him. I personally would have liked to hear more about how Penn’s activism gets threaded through the other currents of his life. Watching “Citizen Penn,” I believe in the depth of his compassion, much as I believe in Jane Fonda’s or Bob Geldof’s. I also believe that Sean Penn is a complicated person who carved out the role of the conscience of Hollywood for complicated reasons. If you want to get a hint of those, you need to wait for a different documentary.

The disrupted festival circuit has many implications for doc filmmakers, who often spend years – sometimes decades – making nonfiction fare on miniscule budgets. The reward for the struggle that is doc filmmaking is often a film festival premiere where the documentary can finally be seen, appreciated and hopefully sold to the highest bidder.

To give visibility to films that had been scheduled to screen at 2020 film festivals like Tribeca, South by Southwest and DocLands Documentary Film Festival, Variety Streaming Room and California Film Institute’s DocLands hosted a virtual discussion called “DocTalk From Home” on Sunday. Moderated by Variety senior features writer Andrew Barker, the virtual conversation featured eight nonfiction directors with films that were selected for the DocLands 2020 program.

The live virtual discussion showcased trailers of all eight docus followed by an interactive Q&A with the directors, who spoke about their films and the future of the documentary ecosystem.

Hardy’s “Citizen Penn,” about Sean Penn and his foundation’s decade-long efforts to help Haiti after the January 12, 2010 earthquake, was set to have its world premiere at the Tribeca Film Festival in April with Penn in attendance. But when Tribeca announced it was offering a virtual experience by unveiling some programming online, Hardy pulled “Citizen Penn.”

“Having that premiere go away (means) trying to hustle with this film and find a distributor,” said Hardy, who had to convince Penn to let him turn footage into a feature length doc.

“(Sean) certainly didn’t want it to come off as a vanity project and seem like this white savior riding into (Haiti) and doing something,” Hardy said. “I understood his reluctance. It was something that myself and the whole (film) team kept in mind — that if it steers in that direction we are doing something wrong.”

Porter also pulled “John Lewis: Good Trouble” from Tribeca’s virtual festival. The withdrawal may have been slightly less painful for Porter because her doc, about the life and career of Rep. John Lewis, was commissioned by CNN Films and acquired by Participant and Magnolia Pictures in December. That said, Porter said that she is mourning the loss of her film’s festival debut.

“Film festivals are not just about publicity and awards,” she said. “They are about connecting. The reason I make movies is because it’s a form of connecting with people. I miss having people in the room watching my film. It’s a very special moment that really only festivals provide and I will definitely miss that.”

“Just in the last couple of years the audience has been finding documentaries theatrically,” Porter said. “We were just having our moment of being able to get out there (successfully into theaters). That had a couple of different benefits not just for that film, but also for all the people who are helping (doc filmmakers) finance documentaries. (Financiers) were looking at our films differently — as if people want to go see them in a theaters.”

Johnson and Bradley, who premiered their respective films at the Sundance Film Festival in January, are hoping that Covid-19 leads to change in the nonfiction community.

“Covid in many ways is offering opportunities for the work and for filmmakers to come together that is unprecedented in this sense that it’s public,” said Bradley, who won the Sundance 2020 U.S. Documentary Directing award for “Time,” a look at a family torn apart by a 60-year prison sentence. “There are a lot of positives that can come from that. It’s going to force us not to just deal with this current moment but to really try to shift the way in which we reach people and the way in which we engage audiences as a whole once this is over.”

Johnson hopes the pandemic will lead to a more inclusive documentary ecosystem.

Later this year Amazon Studios will release “Time” while Netflix will stream Johnson’s “Dick Johnson is Dead,” which garnered the Sundance 2020 Innovation in Non-Fiction prize.

Netflix also picked up Orlowski’s “The Social Dilemma” after its Sundance 2020 premiere. About the ethics and impact of social media, Orlowski is currently re-editing so he can include the rise in social media use due to Covid-19.

“Just when I thought everything was done, good and out the door for the last couple of months we have be working to make huge, huge shifts to the whole film both tonally and then also specifically around Covid and the misinformation we are seeing around Covid,” said Orlowski. “Now there is a whole new section of the film that we have tried to figure out how to weave (into the film) over the last couple of weeks.”

“The pandemic is horrible for so many reasons, but for our industry I think this will be a real turning point,” said Porter. “We are going to have to go back to the drawing board and figure out how to achieve all of our aims.”