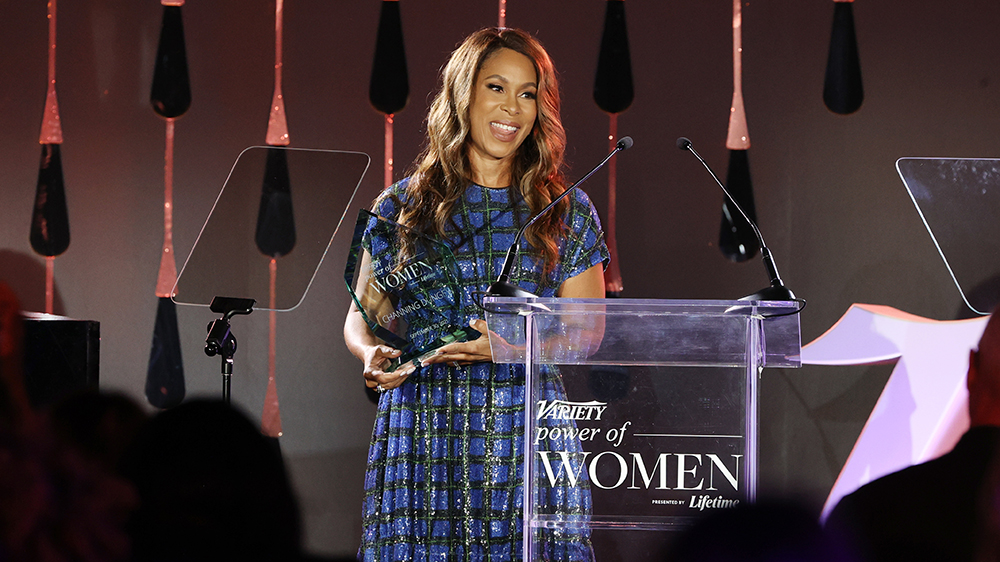 Warner Bros. Television Group Chairman Channing Dungey called on others to use their power for good during Variety‘s Power of Women event presented by Lifetime.

“I was lucky enough as a young woman in this business to be mentored by women who taught me that if we are in a position of power, it’s our obligation and our responsibility, to empower others,” she said. “I think tonight is about more than celebrating the power of women. It’s also about celebrating and recognizing the importance of empowering each other.”

Dungey, the first woman to run TV operations in the history of Warner Bros., was feted at the event alongside Rita Moreno, Katy Perry, Amanda Gorman and Lorde. Dungey referred to the other honorees as “an extraordinary group of women, with a truly diverse range of talents.” She was brought to the stage by critically-acclaimed film and television creator Ava DuVernay.

“I am fortunate that I have the opportunity to work closely with her, and to be artistically supported by her,” DuVernay said. “And I am thrilled to present her tonight as a Variety 2021 Power of Women honoree.”

Dungey began her remarks by delving into the history of the word “power,” stating that it “derives from the Latin word ‘imperium,’ meaning ‘to be able.’

“Think about that,” she said. “We are all able. By that definition, all of us are powerful. We all have power. So why then, lately, do I sometimes find myself feeling powerless? Today, we live in a country where we and our neighbors can no longer agree on a common set of truths. We live in a world where people are more likely to believe information that they learn from social media than information reported in the news. Here, and around the world, the very idea of democracy is being challenged. Women are being deprived of their rights. Racial and ethnic groups are facing discrimination and persecution at alarming rates. Climate change now truly threatens us all. And so yes, sometimes I do feel powerless. I imagine I’m not alone in that.”

Dungey went on to say that she owes her success to the women who came before her who paved the way for herself and others like her today. “Women who proved that power could mean more than strength or dominance or authority,” she said. “Who showed me that power can also mean inspiring others, and leading by example, and affecting positive change — and doing so with kindness, compassion and empathy.”

She continued by saying that she sees the importance of such empowerment at the Children’s Institute, a Los Angeles-based nonprofit on which Dungey is a member of the board of trustees.

“I love it when I get to visit the Institute’s preschools in Watts and have the chance to spend some time with the children,” she said. “They are all so bright and eager and curious. They have so much potential. They are ready to learn and nurturing that spark at an early age is so critical.”

Channing Dungey called a meeting Friday of ABC’s top executives and revealed to them that she would step down as the network’s entertainment president. Within an hour, Disney went public with the news that Dungey would be succeeded by Karey Burke, head of programming for ABC’s sibling cabler Freeform.

The news was not a surprise to those who know Dungey, who had been wrestling with the decision on whether to stay at ABC or move on when her contract ended early next year, three years after she was named ABC Entertainment president in February 2016.

But the news still generated a shockwave within ABC. Anxiety has already been high at the network as Disney prepares to close its takeover of 21st Century Fox, which will bring the arrival of Fox’s Peter Rice and Dana Walden as the new senior management team.

“Everyone is devastated,” one insider told Variety. “There’s a reason Channing was so beloved and respected around town.”

Sources present tell Variety that Dungey gave no indication when speaking to her executive team what her next move would be. She expressed admiration for Rice, who will lead all non-sports TV operations; and Walden, who will oversee ABC, cable channel Freeform, and the enlarged TV studio operation.

Dungey was offered a new contract and encouraged to stay, but chose not to be part of the new regime.

Insiders emphasized that there is no ill will toward Burke, a seasoned TV executive who has been a member of the extended Disney TV family at Freeform since 2014. A source close to the situation said the discussions with Dungey and Burke began about a month ago. Rice and Walden were involved in the process even though neither of them have formally started their new jobs at Disney.

Dungey occupied a unique position within the Disney-ABC Television Group and in the industry at large. A 14-year veteran of ABC, she rose to the position of entertainment president in 2016 after the departure of Paul Lee, on the strength of her record leading drama development for the network. The shows that she helped bring to air, particularly Shonda Rhimes’ “Scandal” and “How to Get Away With Murder,” came to define an era for ABC. The first African-American executive to lead a broadcast network, her public profile grew this year when she led the decision to cancel “Roseanne” — last season’s highest-rated TV show — soon after star Roseanne Barr’s racist comments on Twitter ignited a firestorm of criticism. Dungey then worked quickly with executive producer Tom Werner to develop a spinoff, “The Conners,” designed to capitalize on the show’s popularity by keeping the core cast in place, minus Barr, who voluntarily gave up her rights to benefit financially from the new series.

Though Dungey’s departure, effective immediately, surprised her team, it comes at a time when ABC insiders are just beginning to experience the change expected to come with the Fox acquisition. In October, the network’s comedy chief, Jamila Hunter, departed to join Kenya Barris’ production company. Barris and Rhimes both in the last year and a half negotiated early exits from their overall deals at ABC Studios to score lucrative new agreements with Netflix — delivering substantive blows to ABC’s brand and its development pipeline.

What Dungey does next is, for now, a question. She is a popular executive with admired programming taste and deep talent relationships — particularly with Rhimes, whose Netflix development slate is bigger than some cable channels’, and could benefit from a seasoned executive hand working with the producer.

Sources close to the situation emphasized that the decision to depart ABC was entirely Dungey’s. She is known to have had a close relationship with Disney chairman-CEO Bob Iger who is said to have assured her that she would have a place at ABC or Disney in the post-Fox realignment. Dungey has expressed a desire to be closer to the production process, having come up at ABC through the studio side.

Burke, meanwhile, comes into ABC with the benefit of experience as both a buyer and seller. She worked at NBC during the “Must-See TV” heyday, starting out as an assistant in the early 1990s and rising to exec VP of primetime series before leaving as part of a broader shakeup of the network in 2003.

Burke then partnered with Ashton Kutcher and Jason Goldberg in Katalyst Films, which was active in digital entertainment early on as well as traditional TV. Katalyst for a time had an overall deal with 20th Century Fox TV when that studio was headed by Walden, who has known Burke through business and social circles for some time.

In 2010, Burke teamed with director Todd Holland in the Dark Toy production banner. That company punched above its weight in landing two NBC comedy series orders — the Matthew Perry comedy “Go On” and sitcom “Free Agents” — in a short time. Burke’s time as a producer tasked with selling shows to networks will be invaluable as she takes on the challenge of keeping ABC in the game at a time when content costs are going through the roof and top talent deals have hit the eye-popping nine-figure range.

Burke’s work at Freeform impressed Walden and Rice, both in the quality of programming the cable has generated on her watch and the leadership she demonstrated in building her programming and marketing team at Freeform.

Dungey’s stature at ABC has only grown in the past 12 months since the Fox transaction became a reality. A source noted that Dungey was focused on making sure her executives were well positioned for after the merger and was incredibly gracious as the conversations with Burke accelerated.

Also impressive was the fact that news of the Dungey-Burke transition kept quiet until ABC released the news around 2 p.m. PT on Friday. That ability to keep a tight lid on information involving such a high-level shuffle reflected the Disney ethos, in contrast to the Fox culture where information and gossip  has traditionally been much more porous through the Century City lot.

“They knew how to handle it in a way that would be very stealth,” said one Fox executive who will be making the transition to Disney. “It was very impressive.”