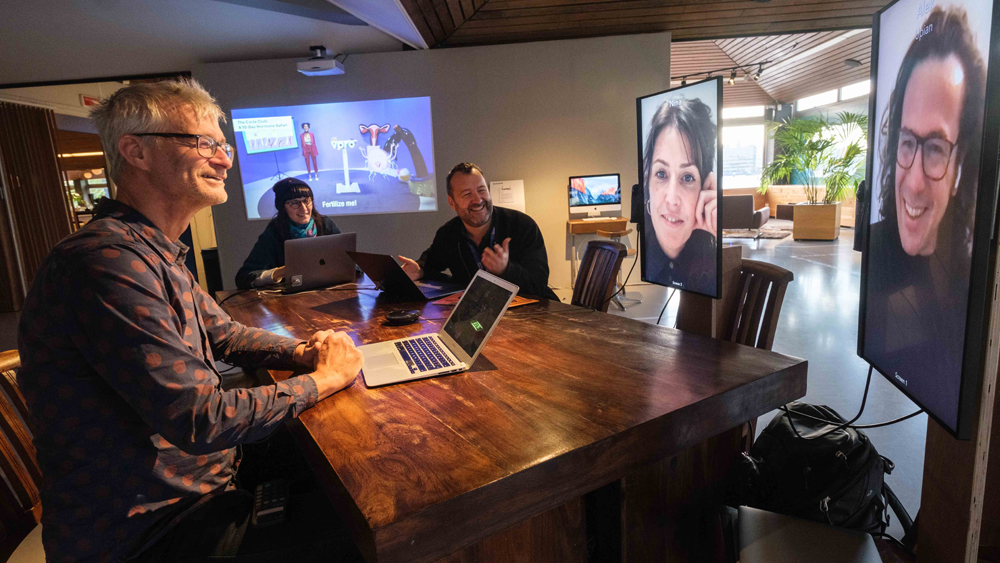 Founded in 2007, IDFA’s platform for interactive documentary art and storytelling, DocLab, prepares to celebrate its 15th anniversary with a slew of new projects and collaborations, theme program Liminal Reality and a special screening of Jonathan Harris’ “In Fragments.” His digital projects were featured during the event’s very first year.

“Everything has changed and nothing has changed,” says the festival’s head of new media, Caspar Sonnen, looking back on the initiative that proved ahead of the curve. Fifteen years later, technology has become more accessible to artists and most major festivals have an interactive component, but the field is still constantly reinventing itself.

“Within the festival circuit, we were one of the first to create a dedicated interactive program,” he says, noting that while VR already existed, it was relegated to specialized labs and universities.

“It was the time when people gathered in a room and said: ‘So, I guess this ‘internet thing’ is not going anywhere.’ There was a lot of excitement about this new, liberating medium and artists began to explore it.”

In the case of DocLab, its connection to the art of documentary proved crucial to its identity, allowing the artists to feel their work reflects and represents the world around them, says Sonnen. “This is something new media has always done. When film was invented, they pointed the camera at a train arriving at the station.” But while it started out as an online program, a real-life connection was, and continues to be an important part of the event, bringing the “unconnected” community together.

“Artists who work with interactive technologies are probably more critical of it than people who use it less often. They make ephemeral works that are hard to pinpoint, so they really want to meet their audience,” he says, admitting that the pandemic has triggered very different responses. In “Testing Times,” Victoria Mapplebeck uses voicemail messages from three generations experiencing lockdown, “TM” by Alexander Devriendt and Ontroerend Goed explores digital technologies and performance art, while “Symbiosis” by Marcel van Brakel and Mark Meeuwenoord was inspired by science philosopher Donna Haraway.

“She has been writing these speculative fabulations about the future when man, machine and nature come to some kind of symbiosis. It’s not a direct response to the pandemic, but it feels especially timely today,” he adds.

“The pandemic has taught us there is still a lot to be done in terms of presenting work online. My mother had to experience the funeral of her sister on Microsoft Teams. It showed us all the beauty and sadness of technology as a surrogate for the physical experience.”

As different “families” of new media are starting to take shape, Sonnen’s team tries to find the best home for each project, also concentrating on the underrepresented artists and territories.

“We still see a very Western-dominated field, but there is a shift happening,” he says, mentioning the likes of “Diagnosia” by Mengtai Zhang and Lemon Guo and “A Rest Guide for a Tired Nigerian Artist” by Rahima Gambo.

“These are amazing experiences, bringing a universal perspective. ‘A Rest Guide…’ started as an Instagram project, processing the artist’s fatigue after a year of pandemic. It connected to what many artists and filmmakers were going through, feeling underappreciated and wondering if they should start selling face masks instead.”

Noting the ongoing obsession with latest technologies, Sonnen admits that he is also “looking for the familiar.”

“Orson Welles wasn’t the first one to use deep focus, but he converted it into a form that went beyond mere technological experimentation. That’s what we want, too. Every new medium is marketed as a better, ‘more intense’ reproduction of reality. There is some truth to it, but a book can be more immersive than a VR project. It’s not the medium itself, it’s what you do with it,” he says, calling the current situation an “in-between” moment.

“Fifteen years ago, we started to celebrate the experimentation and the openness that the internet gave us. Now, it’s a much less open playground. The tech giants are flying to Mars, but where do we want the technology to go? I really believe that we still have a choice and that’s what makes it exciting.”