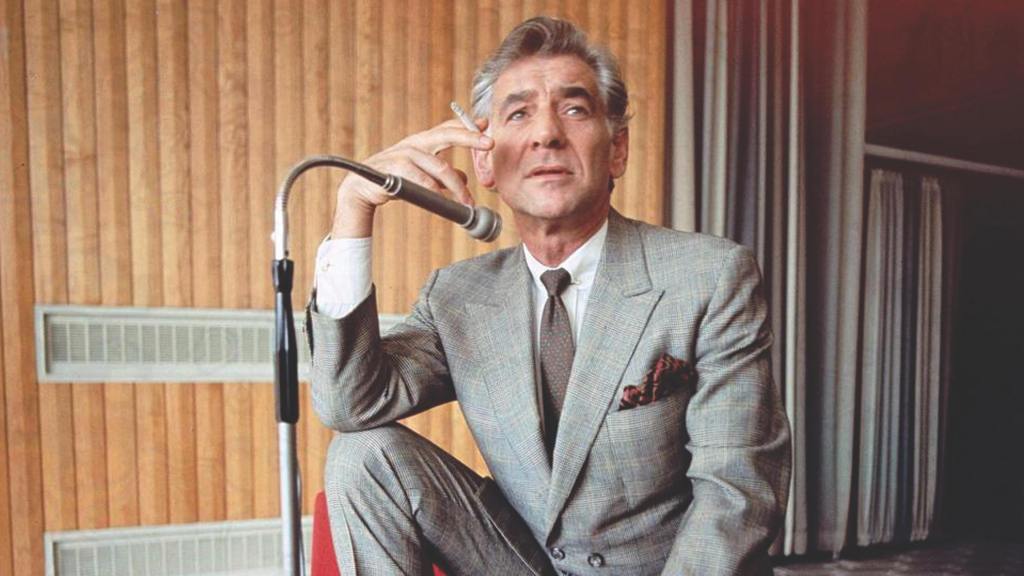 There was a time, in the middle of the 20th century, when the orchestra conductor was a shamanistic figure in American life. And during that era, no shaman was more magical — a higher priest of high culture — than Leonard Bernstein. To understand the pedestal he strode upon, you’d have to go back to the period when classical music was still at the center of things (in lavishly funded public-school programs, on FM radio, in the thriving professional orchestras that sprung up in nearly every major city in the land). You’d have to go back to the era before Bradley Cooper, coming off “A Star Is Born,” couldn’t get the backing for a Bernstein biopic that would play in movie theaters. (He’s making it for Netflix instead.) Within that now vanishing world, the figure of the orchestra conductor loomed like some elevated rock-star version of Merlin crossed with P.T. Barnum, a mystic who would lead us all to the mountaintop of classical ecstasy.

He was almost like a one-man preview of the counterculture revolution: a lone figure in a tuxedo, solemn and lordly, holding his baton like a wand, his thick hair perfectly groomed. But as he conducted, and began to get all passionate and excited, something came erupting out of him. The hair would become unkempt (which was sexy). The sweat would form. A tempestuous fervor would emerge. Before our eyes, this civilized man, guiding the music and also under the spell of it, would be transformed. He would become…a longhair!

The whole idea of the conductor was one of the most riveting pieces of theater that Western art had ever come up with. His job, during a performance, was to lead the orchestra, to keep it perfectly timed and on track (though as anyone who has played in orchestras knows full well, a good one can run through almost any piece just fine without the conductor). His real job, though (the one that people paid to see), was the drama that’s been parodied by everything from “Bugs Bunny” to Simon Hellberg’s luscious conductor monologue in Leos Carax’s “Annette”: his role of acting out the passion of the music for the audience.

This may now seem, to younger generations, a corny, indulgent, and completely irrelevant form of grandstanding. But when you go back and watch Leonard Bernstein do it in the galvanizing documentary “Bernstein’s Wall,” it’s still cathartic. You see the majestic quality of it. Bernstein, who when he was young resembled a dreamy-eyed Hebraic Rock Hudson, evolved, in his classical stardom, into a towering figure with the bearing of an eagle and the worldly thousand-yard sensual stare of someone posing for a place on Mount Rushmore. When he conducted, he seemed to register, on his face and in his body, every note of the music unfolding before him, as if his nerve endings were fused with the notes. Conducting a Beethoven symphony, he’s on fire with life. He’s got the music in him, and he’s in the music. They’re sharing the same electrons. He transmits what the audience is feeling and heightens it, as if to say: Yes, give in to these feelings, let them lift you up — the music really is this grand.

Bernstein was the first American celebrity conductor, the first to attain the kind of prestige associated with European maestros like Herbert von Karajan and Leopold Stokowski. The time was right for him, and he was right for the time — as was clear from the moment of his rocket to fame. It was November 1943, and Bernstein had recently been hired as the assistant conductor of the New York Philharmonic, a position in which one could slowly drown, since the scheduled conductors tended to never get sick. One day, though, Bruno Walter did. The 25-year-old Bernstein had been up all night partying and had to step in and conduct a 3:00 p.m. concert with no rehearsal. But from the moment he walked onstage at Carnegie Hall to conduct a Schumann overture, the crowd was enraptured. He got a standing ovation, and the concert was reviewed the next day on the front page of The New York Times.

What had happened? Back then, conductors were never that young, and the fact that Bernstein had that Jewish caboose of a last name had been considered, by some, to be a perilous disadvantage. At the Curtis Institute in Philadelphia, Bernstein’s mentor and (the film suggests) his lover, the 60ish Russian conductor Serge Koussevitzky (from the start, Bernstein knew just who to cultivate), told Bernstein to change his name to “Burns.” But after a restless night of no sleep, he couldn’t bring himself to do it; he couldn’t not be himself.

What he may have sensed is that “Bernstein” was, in fact, no longer a disadvantage — it had become part of his ethnic-generational exoticism. It gave him, within the classical-music world, an image as fresh as that of a Jewish JFK. He connected with the medium of television as if born to it, becoming, in the ’50s and ’60s, a kind of godly overseer of the new American middle class and its aspiration toward culture. He became our tour guide, our straight-shooter master-class music rabbi, our young people’s guru, our explainer of the mysteries of beauty. The film includes many, many excerpts from Bernstein’s television appearances over the decades (including some unintentionally funny ones from the ’70s, when his regal gray-haired dignity tends to be undercut by the fact that he’s holding a cigarette), and his booming-voiced eloquence is astonishing. He was, among other things, a great populist critic of music, someone who could talk about beauty and sound and make those ethereal things real. There was always a music to his words.

Bernstein launched his career as a composer almost simultaneously to his rise as a conductor, and one flaw in “Bernstein’s Wall” is that the documentary takes his identity as a writer of musicals and ballets far too much for granted. The tale it tells of how “West Side Story” came into being is fascinating (Bernstein and Arthur Laurents had shelved the Romeo-and-Juliet-in-the-inner-city idea years before for being too dated; then, while sitting around the pool at the Beverly Hills Hotel, they read reports of the ethnic riots in Los Angeles and instantly saw that it could be done). But how did someone like Bernstein, born in 1918 and steeped in classical rigor, suddenly find the ability to compose songs as fancy free as the ones in “West Side Story”? What popular music was he listening to? (Even Paul McCartney had scores of influences.) We don’t learn a bit about any of this, so the film makes it feel as if “West Side Story” just…happened.

Yet if “Bernstein’s Wall” is the kind of movie you always want more from, not less, the director, Douglas Tirola (who in 2015 made the brilliant “National Lampoon” documentary “Drunk Stoned Brilliant Dead”), has done a sensitive job of coloring in the side of Bernstein that was hidden at the time and still remains shrouded in some mystery: his sexuality. The film presents excerpts from his letters, and they are forthright (“Dear Aaron Copland, Earth-Scorcher, I can’t kid myself anymore. I still hate to be alone, and that’s where you come in; you’re the only one who persists and persists, and then this wish for closeness manifests itself in a sexual desire, the more promiscuous the better”), to the point that Copland answered that one by suggesting to the young Bernstein that if he wasn’t careful, he’d be providing fodder for blackmail down the line. The film creates a complex portrait of the Bernsteins’ marriage (which will be the subject of Bradley Cooper’s “Maestro,” with Cooper and Carey Mulligan co-starring): Lenny genuinely loved Felicia, who he wed in 1951, and considered himself a devoted family man, but he did not keep his sexual identity hidden from her, and at one point we hear in a letter how despondent their “connubial” life is making her. She tells him that he should try going off and doing what he pleases, “without guilt or confession.”

“Bernstein’s Wall” tries to frame Leonard Bernstein as a humanitarian who lived for activism as much as he did for music. But to me, at least, a little of his imagine-all-the-people ’70s liberalism goes a long way. It now sounds naïve. (Bernstein in Israel: “It’s just riveting to see Jews and Arabs mingling. I mean, this is what it’s all about, isn’t it?”) And while the film is honest as to how badly Tom Wolfe’s infamous 1970 inside-party portrait “Radical Chic” tainted the Bernsteins, with its scathing portrait of the contradictions of upper bourgeois radicalism, the movie gets a little defensive about it. It winds up siding with Bernstein in suggesting that Wolfe ultimately took a cheap shot (which I don’t believe he did). It’s not that I think Bernstein’s compassion was anything less than real. It’s that his music = compassion homilies were too simplistic to represent the grandeur of what music meant to him.

What the documentary captures, profoundly, is that Leonard Bernstein was a fierce hedonist who worked hard to live the life he wanted. The film closes with a clip of him performing, and simultaneously conducting, the ebullient third movement of Beethoven’s First Piano Concerto, and the grin on Bernstein’s face is as joyful as anything in the Ode to Joy. Speaking of which, we see him conducting that one in Berlin in 1989, on the day the Berlin Wall fell, and his gravitas on that podium is painfully moving. He would die just one year later, though one of the things I can’t help but wonder is: If Leonard Bernstein had lived in a less repressive society, where he didn’t feel like he had to hide who he was, maybe he wouldn’t have smoked so damn much — and maybe he wouldn’t have died at 72. He packed as much life force into those years as any artist you could name. He wrote some timeless songs, but his ultimate gift was to show us that the life force of art lives inside us too.