‘Batwoman’ Team on Creating Connection Between Ryan and Alice, Continuing the Kryptonite Threat in Season 2 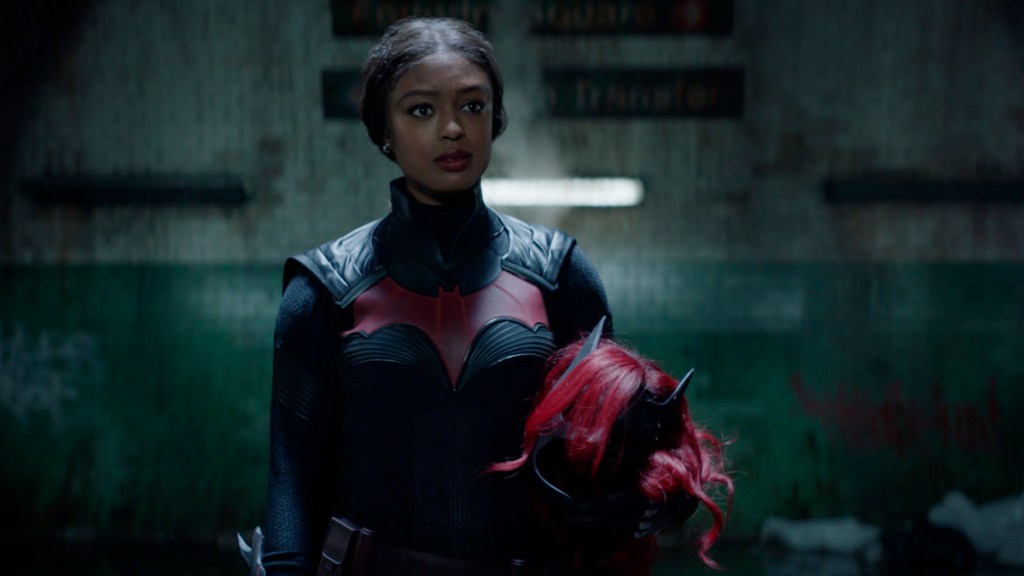 SPOILER ALERT: Do not read if you have not yet watched the Season 2 premiere of “Batwoman.”

After the first season of the CW’s “Batwoman” ended prematurely due to the COVID-19 pandemic, showrunner Caroline Dries was left with one dangling piece of story she knew she needed to further immediately upon the second season: the idea that the titular hero’s super suit was not impenetrable by kryptonite, and that was how Alice née Beth (Rachel Skarsten) planned to take down her sister Kate (Ruby Rose).

Although Kate’s “Batwoman” journey ended in Season 1 when Rose exited the series, Dries kept the kryptonite in play and unleashed it immediately upon Kate’s successor, Ryan Wilder (Javicia Leslie). In the Season 2 premiere, Kate Kane’s plane crashed and, although she was nowhere to be found, her Batsuit was lying among the wreckage.

Unbeknownst to Ryan, who took the suit to attempt to play hero on her own, Alice helped Tommy Elliot aka Hush change his face to perfectly resemble Bruce Wayne aka Batman. He turned up at the Batcave, feigning concern over his missing cousin, and ended up going after Ryan once she put on and activated the suit. It was Tommy who shot her with the kryptonite.

“I wanted to maintain the rule that if you show a gun in Act 1, you need to have it go off by Act 3. I wanted to make sure it stayed relevant in Season 2,” Dries tells Variety.

Having Ryan get shot with kryptonite at the end of the Season 2 premiere keeps it as the “gun” the story for the new season, as the effects of what it does to her, embedded in her chest, will play out in the episodes to come.

Dries got her small-screen start writing on the CW’s “Smallville” from 2006 and 2008 and shares that she always loved that Lex Luthor wore a glove because the kryptonite ring he had “destroyed him.” “It’s this radioactive piece of material that there’s no cure for — there’s no fixing it,” she says. “It’s one of Ryan’s secrets for the beginning part of this season. She has no idea what it is or what’s going on or how to handle it and she’s not perfectly comfortable trusting the Bat-team with it yet either because she doesn’t want to show any signs of weakness.”

But, the kryptonite is weakening her in many ways, which will likely affect some of the decisions she makes as time goes on. “She’s dying,” Dries admits. “It’s the idea that women have to do everything backwards and in heels, and we wanted to show that not only can she put on the suit and make the symbol proud, but she can do it all with a huge handicap.”

Leslie shares that Ryan “does not understand, at all, what is happening to her” when it comes to the effects of the kryptonite. “Overall it’s going to be something that will change her because she’s going to make choices. It’s literally going to be her back against the wall making choices because of it and it’s going to be a huge part of her development, whether good or bad. That part is just going to be based off of whether or not you agree with her decisions.”

Ryan comes to the Bat-team looking for justice (or revenge, again depending on perspective) against Alice and her gang who killed Ryan’s adoptive mother. “You can be the strongest person in the world as a superhero, but when it comes to the past and a grudge and someone taking your mom’s life and you feeling the need to seek revenge, that can be more powerful than anything else in this world,” says Leslie. “So that becomes a huge part of this — to walk away from revenge to seek what’s right is hard. But technically the revenge is what seems right: Alice is a bad person. So it doesn’t feel like revenge is going against someone who doesn’t deserve going to jail.”

Finding a way to personally tie Alice and Ryan was “the biggest creative head-scratcher coming into the season,” Dries admits, but it was necessary to keep Alice more firmly in the central story while she is “mostly focused on the aftermath of Kate’s plane blowing up and who did it, why and how does she get her revenge?”

Thematically there are parallels between Ryan and Alice’s story in Season 2, Dries admits: “They’re both going through this personal journey of being able to forgive themselves and look outside their anger and past; they both find they’re anchored to their past and they need to move forward.” But when it comes to plot, she says they are not “100% lined up.”

“We put Alice through the gambit this season. She goes through an emotional reckoning, as we saw in the premiere, and goes from completely spiraling and rudderless to very focused to incredibly emotionally conflicted. We will meet somebody else this season to pull the vulnerability out of her, but she’s so focused on her drive that she isn’t necessarily noticing it,” she previews.

Meanwhile, Ryan is “out to prove herself” to her new team, the city of Gotham and herself, Dries says, while also offering a new perspective on how she sees Batwoman’s position within the city.

On one hand, Dries explains, there is a “sense of joy and aspirational happiness” to Ryan discovering all of the technology at her disposal. “We didn’t do that with Kate Kane because she’s a billionaire and it’s not as impressive, I would say. Her cousin was Batman, so it was less of an, ‘Oh my God, I’m a kid on Christmas morning’ but for Ryan, she brings that [excitement] into her takedowns when she’s fighting bad guys. There’s a sense of fun to it that makes Ryan incredibly human and relatable.”

On a deeper level, though, Ryan’s past experience with the Crows and the Gotham City Police Department gives her, and the team by extension, new “insight and awareness of the methodology and psychology of the criminal side of it all.”

Ryan was unjustly incarcerated for a year-and-a-half in her backstory, and because of that experience she doesn’t trust the Crows. The second season of “Batwoman,” therefore, will “pull back the layers on not just the Crows, but [also] the GCPD as well and all of these institutions that exist in Gotham,” Dries reveals.

“The Black Lives Matter movement happened during the writers’ room hiatus but I had already been breaking the story in my mind, and with the discussion in the writers’ room it became so obvious we already have an authoritarian institution in the Crows built into the show, so we were like, ‘How can we make this represent the real world?’ And of course a Black hero is going to have an opinion on law enforcement, so we decided to lean into it to be truthful,” Dries continues.

While there will be a number of external threats to Ryan as Batwoman over the course of the season, the show is also dealing in some heavy internal conflict over her donning the suit for a number of characters. Jacob Kane (Dougray Scott), for example, learned his daughter Kate was Batwoman only after she was gone, and from Alice of all people. Although he is “trying to hold it together,” Dries says, he is experiencing a version of deja vu from when his other daughter was missing years earlier. “He’s trying to make different choices this time, but he’s also discovering his own shortcomings and he’ll hit rock bottom before there’s light at the end of the tunnel.”

Bat-team members Luke (Camrus Johnson) and Mary (Nicole Kang) will struggle with the symbolism of a new Batwoman, Dries says: “It requires them to say that Kate isn’t Batwoman and it requires them to say that Kate is not coming back. And so it becomes this existential question in their relationship and one of them is more willing to believe that Kate is alive than the other, and that becomes a point of contention within the team.”

And Ryan herself begins to realize that some people within the city see Batwoman as the same as the law enforcement groups that have been failing them. “She’s another uniform that goes about doing things [her] own way,” Dries explains. “Batwoman ties up the bad guys and then the GCPD picks them up and puts them into jail and then these guys are in the system and they come out and commit a crime again, so how does she make that change?”

“At the end of the day, it’s not for us to do what’s been done to us; it’s about letting the law do what it’s supposed to do, and Batwoman does not kill, and that’s what Ryan has to keep reminding herself of,” Leslie says.