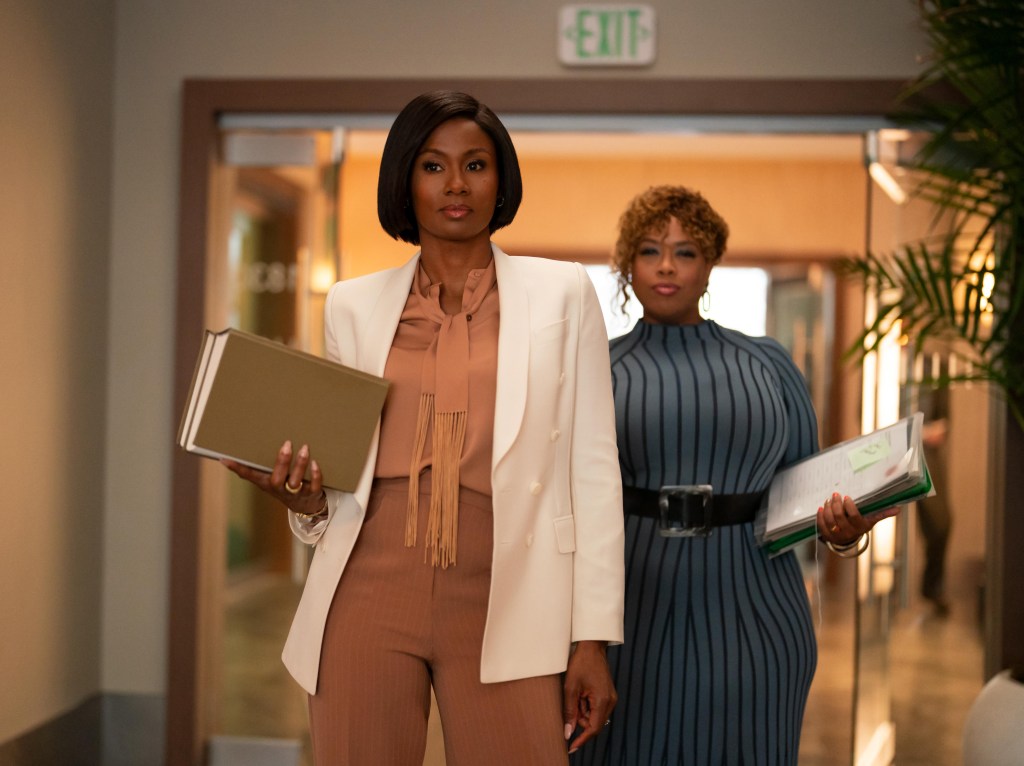 “Reasonable Doubt” has a healthy amount of “Scandal” in its DNA.

The series was created by former “Scandal” writer and producer Raamla Mohamed; Kerry Washington directs the first episode. And the swirling intrigue around a self-styled do-gooder protagonist — who’s unconventional in her methods, and irresistibly drawn to drama — will recall Olivia Pope, the character Washington played on the ABC drama. Back then, Olivia unwound with a glass of red wine; as if to flex the looser, loucher possibilities of streaming, Emayatzy Corinealdi’s Jax Stewart ends her day with a cigarette.

That seems an apt distillation of a series that’s charged with a nervy energy; “Reasonable Doubt” places Corinealdi’s very flawed protagonist at its center and watches as she generates smoke, and steam. Jax is a former public defender who now works in high-profile criminal defense in Los Angeles; her attention is divided between her caseload and her attraction to a man she once defended, incarcerated for many, years but still a vivid part of her life.

Played both in flashback and the present day by Michael Ealy, the character of Damon has real chemistry with Jax; he also plays into a character beat that Jax is attracted to danger that felt in moments like the wrong kind of poor taste. “Reasonable Doubt” aims to treat Damon’s plight sensitively, but also to treat Jax’s attraction to him as symptomatic of her taste for being bad. It’s a tricky needle to thread, so much so that I came to be genuinely surprised that this series counts Shawn Holley, the celebrity attorney on whom Jax is loosely based, as a producer. (Who’d be willing to air out a version of themselves quite this outsized?)

The show fares better when depicting Jax’s emotional distance from her current cases, which can present interestingly as a mild lawyerly sociopathy. She refers to a plaintiff who’s pressing harassment charges against her client as an “IG thot” and declares that “making someone uncomfortable” is not illegal; this show’s willingness to make its heroine pretty unheroic exists at an extreme, but is redolent of a refreshing honesty about the reality of defense work.

In all, Jax’s messiness, perennially far closer to falling apart than Olivia Pope ever got, makes for an interesting protagonist, and Corinealdi effectively sells her intellect and her impulses. Produced by Onyx Collective, a new content brand within Disney intended to boost creators of color and underrepresented voices, “Reasonable Doubt” plays like the juicy soap Shonda Rhimes would never write; its excesses, often, grab and hold our attention.