Spotify Starts Selling Audiobooks in U.S., With Catalog of 300,000-Plus Titles 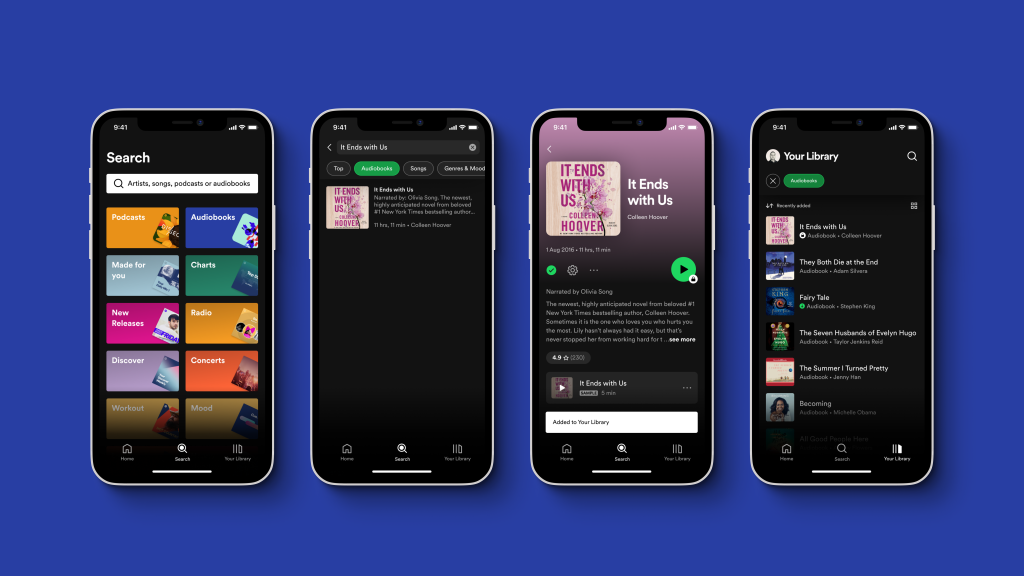 Spotify wants to give Audible, Amazon’s market-leading audiobook marketplace, a run for its money.

Starting Tuesday, Spotify users in the U.S. are able to purchase and listen to more than 300,000 audiobook titles. The streamer is introducing a new user interface designed specifically for audiobook listening, alongside Spotify’s features for music and podcasts.

At launch, Spotify is selling audiobooks à la carte, without any ads. But the company is exploring new business models that could include subscriptions or ad-supported formats, according to Nir Zicherman, Spotify’s VP and global head of audiobooks and gated content. Spotify plans to roll out audiobook sales in additional markets following the initial U.S. debut.

Spotify’s entry into the audiobook market comes after closing its acquisition for audiobook distributor Findaway in June, paying about $119 million in cash for the company.

“We’ve always believed that the potential for audio is limitless, and have been saying for a while now that our ambition is to be the complete package for everyone’s listening needs,” Zicherman said in a statement. “Audiobooks are next to come into the picture because we see a substantial untapped market.” Per Spotify’s estimates, audiobooks represent just a 6%-7% share of the wider book market, but the category is growing by 20% year over year.

In the Spotify app, audiobooks will show up with a lock icon on the play button (indicating they need to be purchased in order to listen). But you can’t buy them via an in-app purchase: Users must buy audiobooks from Spotify on a web page using a credit card — thereby avoiding transaction fees levied by Apple’s App Store and Google Play. Upon returning to Spotify, the book will be automatically saved in their library and available to listen whenever they want.

Audiobook features in Spotify include: the ability to download content for offline listening; automatic bookmarking to save your place and pick up where you left off; speed controls to speed up or slow down the pace of playback; and a rating feature, which will publicly display the aggregate rating of the book.

Spotify has an opportunity “to apply our learnings around creators to uplift the authors and publishers whose content is now on Spotify,” Zicherman said. “It’s important for us to deliver a great experience for the people behind the audiobooks we all love, and you can expect that we’ll start providing some exciting creator-facing features soon.”

Zicherman was formerly CTO of Anchor, the self-publishing podcast company Spotify acquired in 2019. As for which audiobook he’s most looking forward to, Zicherman cited “Liberation Day” by George Saunders, a short-story collection published by Random House and slated to be released Oct. 18. In addition to Saunders, the audiobook of “Liberation Day” will feature narrators including Tina Fey, Michael McKean, Edi Patterson, Jenny Slate, Jack McBrayer, Melora Hardin and Stephen Root.

Laura Poitras, Venice Winner With ‘All the Beauty and the Bloodshed,’ to Be IDFA Guest of Honor Taylor Swift Named Songwriter-Artist of the Decade by NSAI: Read Her Speech