How Yola, Allison Russell and the Black Women of Nashville Are Changing the Face of Roots Music 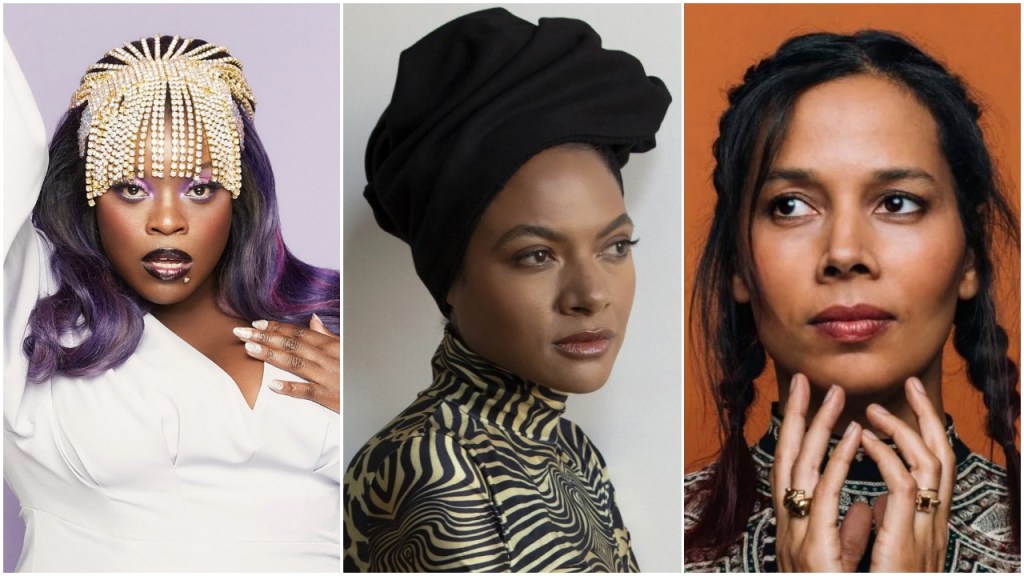 When the Nashville chapter of the Recording Academy held its annual pre-Grammys celebration for Tennessee-based nominees in early March, one of those contenders, Yola, filed a report from the party on Instagram. “The vibes were strong,” she wrote, “and so was the melanin!”

Looking at the nominations in the country, folk and American roots categories, it was clear what the people of color in the chapter had to celebrate — and the Black women most of all. Two years ago, when Yola received her first four Grammy nominations (including best new artist), the Black singer-songwriter was something of an outlier; this year she’s part of a growing tide in the country, folk and American roots categories. The 2022 noms include five Black women who live in Nashville or are loosely part of the community, with recognition coming as well for Rhiannon Giddens, Valerie June and Allison Russell on the Americana side and Mickey Guyton in mainstream country.

Yet those performers are really just the tip of the iceberg for a phenomenally talented group of women that includes rawer, roots-based newcomers like Joy Oladokun, Amythyst Kiah and Adia Victoria and mainstream-oriented talents with a more traditional Music Row bent like Rissi Palmer, Reyna Roberts and Brittney Spencer. What’s most heartening about this wave of talent is how completely different they are stylistically from one another, yet how committed they are to finding commonality and lifting each other up, with fewer fears that they’ll have to compete for a single media spotlight … or a lone Grammy slot.

Yola is happy to have all that company. Before her, it was just a matter of assumption for many that Giddens — who has eight lifetime Grammy nominations and one win — was the sole Black woman out there kicking it in any kind of roots music at all. When Yola came to public prominence, she was welcomed but widely considered something of a novelty, too. “I was four-times Grammy-nominated for my 2019 debut before all my friends, bar Rhiannon. Yes, dark-skinned, plus-size, not Eurocentric, very African-looking me, It was like tumbleweed in these streets for a big community of melanated people to live in, but here I was determined not to be the token forever.”

The change has come faster than she expected. But here’s still further to go in mainstream country — an arena where some seem to feel the job is done merely by the fact that Guyton has an ocean of media visibility, if not chart success. Americana, meanwhile, finally is shedding the image that it, too, is what Jason Isbell has called “a white man’s world.” (He did his part to change the conversation by enlisting seven different Black women artists to open for him on all but one date of a sold-out eight-night stand he did at Nashville’s Ryman Auditorium last October.)

Says Allison Russell, whose three Grammy nods are for American roots song, American roots performance and Americana album: “I feel very hopeful about the way that Americana radio is growing and expanding who they play and who gets listened to. Just the fact that Valerie’s record [“The Moon and Stars: Prescriptions for Dreamers”] was No. 1 for nine weeks was so thrilling to me. Every week that it was, I would do a little dance. That was unprecedented at that format, and thrilling. And we’re just at the very baby-steps beginning of that, so I’m actually very hopeful for what things will look like in 10 years.” ”

Russell is less optimistic about the mainstream country field, “where you look at that top 10 list and it’s all white dudes — and Kane Brown. That’s one aspect, sure. But then there’s also the fact that Music City is Music City because of the Fisk Jubilee Singers,”  she notes, referring to the Black ensemble that just happened to win the first Grammy in its 150-year history last year, in the roots-gospel category.

Brandi Carlile is thrilled about the wave of Black women represented in this year’s roots-based Grammys, even though she’s up against some of them in one of her five categories. She’s particularly been an ally to Russell, who she helped get signed to Fantasy Records, and who she invited to join her as a performer on “Ellen” for her April 1 guest-hosting stint.

(And Carlile would be very happy to lose to one of these friends. “It’s the one reason I’m glad to not have ‘Right on Time’ in Americana,” she says — referring back to how she spoke out when that single of hers, which she submitted in a roots category, was shifted to contending as a pop song by a Grammy committee. “I want to watch one of my friends go and take that thing.”)

Dolly Parton has noticed the wave of Black women becoming prominent in roots music. “Amen to that,” she tells Variety. “I think the women of color that are coming up now are incredible artists and special, wonderful people. And a whole lot of them grow up having that same heart for country music. It’s about hard times and about hard living, and about being able to portray your heart and put your gut into a song. These are beautiful women, and I’m proud of them.”

Mainstream country superstar Maren Morris is another white ally who has used her voice to bolster the movement. At the 2020 CMA Awards, when the conversation was still almost entirely centered around the sorry plight of women in general at country radio, Morris used an acceptance speech to narrow it down to Black women, and reeled off a list of the worthy voices her audience should be listening to. She put her money where her mouth is this year by booking Oladokun, a gay Black woman, to open part of her tour.

Morris recalls where her head was at when she made that CMAs speech: “For me it had to do with having discovered, just literally the week before, Linda Martell’s record” — (“Color Him Father,” a 1969 single that made it to No. 22 on the country chart, which is still, sadly, as high as any solo Black woman has ever gotten) —  “and having it at the forefront of my mind that day I was getting ready for the CMAS.

“You know, the Grammys definitely have reflected these conversations in a better way than the recent ACMs nominee list is doing,” Morris continues, alluding to how even as media-saturating an artist as Guyton didn’t get a nomination this year for her acclaimed album. “You see some ways it’s getting better, and then some ways it’s staying absolutely the same. I want these spaces to feel more inclusive, and it’s not just going to be with a speech at the CMAs. And there are a lot of bad players at play in this town that are actively making sure those women don’t get nominated, and it’s really gross. Once the veil is lifted, you can’t look away. So I’m really trying to be aware of it with the people I hire, with those I’m writing with, and with my openers.”

Oladokun, whose music leans toward an amalgam of folk and rock, says some paradigm shifts are in order across a lot of segments of the industry and audience to shake people out of the idea of which genres Black women are supposed to fit into.

“With this wave has come this boldness and new opportunities and platforms for people like me to be able to tell our stories, unfiltered and unencumbered by how culture says that a Black woman should should perform her story. I think it’s a really cool moment, and almost a history-repeating-itself moment, in the same way that we saw an Odetta or Tracy Chapman as Black women making music outside of the cultural norm.”

On the more mainstream country side, Rissi Palmer is a veteran who now has her own Apple Music Radio show, “Color Me Country,” named after the 1970 Linda Martell album that contained “Color Him Father.” “The highest charting Black woman  is in 1969, still to this day, and Mickey and I are a distant second and third,” she points out. (Palmer’s song “No Air” peaked at No. 47 on the Billboard country chart in 2008, and Guyton’s “Better Than You Left Me” maxed out at No. 34 in 2015.)

“Americana can seem much more expansive to everyone than country music does,” Palmer says. “There, nobody wants to be uncomfortable; that’s evidenced by how quickly everyone wanted to move on from the incident with he who shall not be named” — meaning white male singer Morgan Wallen, who was caught on camera using a racial slur in early 2021.. “Right now, there is this faction of country music that is wanting to be a part of this this dynamic that doesn’t just include race but is also inclusive of sexuality and gender variance, and equity for women and parity for all those that don’t necessarily fit into a box. And then there’s this other faction that is holding on with a white-knuckle grip to the old way of things and to wanting to make country music great again, so to speak. It’s interesting to watch those two factions kind of battle it out for what is ultimately going to be the soul of country music.”

But right now, with the gains for Americana artists out of Nashville in particular, there is plenty to celebrate. Says Russell, “It’s a joyful thing to need to be nominated alongside Yola, alongside Valerie, alongside Rhiannon, who are not just my peers but my chosen sisters. There was a time when only one of us could be seen at a time, because of how intensely entrenched tokenism of Black women’s contributions was — like, they couldn’t see all of us at the same time, literally.” Now, she says, “I feel it’s like a Renaissance revival.”

They know they each have different roles to play in this revival, temperamentally as well as musically. Yola can elucidate some of them — noting, for example, that she takes a more tart approach when she’s raising awareness of herself and the community in interviews, whereas Russell can be a bit sweeter in leading potential allies by the hand. (She and “Alli” lived together in Nashville for some time, as Yola came over from England and began to get set up in America, so they had quality time to notice their complementary qualities.)

“When our differences are noticed, we are not interchangeable,” Yola says. “You have to include us all, not just one of us. when you see merit. Alli affectionately named me ‘the door kicker,’ and I called her ‘the tenderizer.’ Predictably I’d wade in, kick the door down, claim everything as birthright to the diaspora, find like minds, and probably make the unlike minds laugh at a dig I made about their own bias, disarming with humor … Alli would wield this axe of empathy, an inescapable force to tenderize the hardened-of-heart, and organizing the like minds she comes across into a vanguard.

“Everyone has their own way of bringing people into the fold,” Yola continues. “Mickey Guyton would post and research endlessly, finding artists of color in country and helping you find resources for Black women in areas she knew well. She is a superior champion. We all know Rhiannon would educate people about the etymology of everything you know and love about music.”

Leslie Fram, CMT’s VP of music strategy, and the longtime force behind the network’s “Next Women of Country” franchise, goes through the five Black women that are nominated in these Grammy categories and points out that they’ve all been working at it for years, if not decades, even if much of the world is