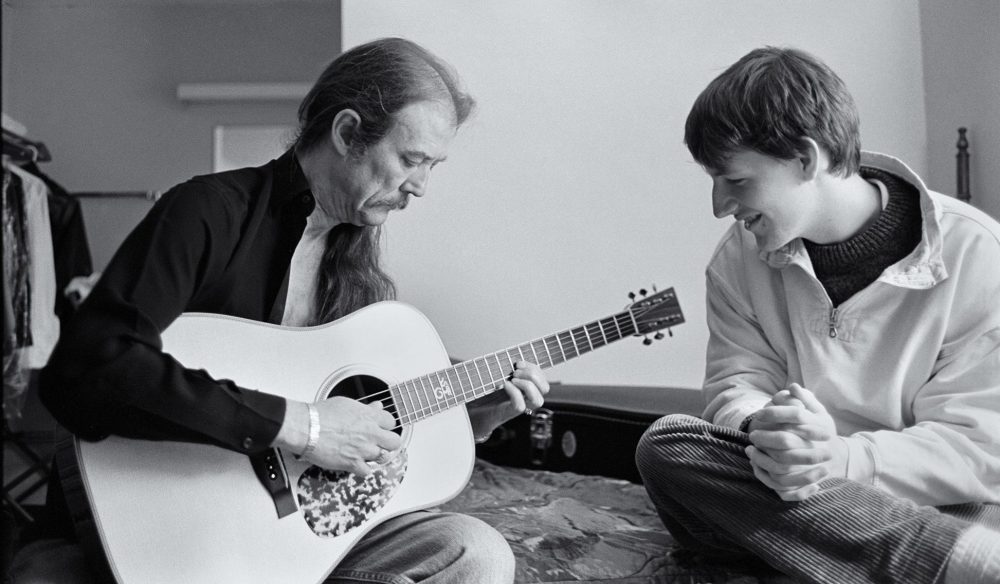 Bluegrass legend Tony Rice died on Christmas Day at age 69. To properly memorialize his prowess and spirit, Variety turned to one of his truest acolytes and a recognized contemporary great — Chris Eldridge, of Punch Brothers and Infamous Stringdusters fame (pictured above with Rice in 2001) — who penned the following tribute to his friend and mentor.

Tony Rice was the greatest bluegrass guitar player to ever live. That may sound hyperbolic, but he singlehandedly changed the way the guitar is played in bluegrass forever, elevating it to a high art and creating its platonic form. But to think of Tony Rice as just a guitar player — even one of the greats — is really missing the bigger picture. His incredibly high standards of musicianship, song selection, sensitivity, etc. changed the game for everyone who followed in his wake.

I was fortunate to grow up knowing Tony, who, though gracious to everyone he met, was very enigmatic and untouchable. My father, Ben Eldridge, was the banjo player in an influential bluegrass band called the Seldom Scene. Tony became a friend of theirs in the early 1970s, crossing paths at clubs and in backstage tents at bluegrass festivals where he was playing with the Bluegrass Alliance (alongside newgrass pioneer Sam Bush) and, later, JD Crowe and the New South.

From my perspective as a child, music was like eating and sleeping — it’s what everyone around me just did. So much so that, even though some of my dad’s bandmates were themselves living legends, delivering at the top of their game, it all seemed somewhat unremarkable to me. In retrospect, the gift of my musical upbringing blows my mind, and I understand how lucky I was. But I give you this context because even as a child, Tony Rice struck me as different.

He cut a captivating figure on stage: tall and thin, motionless as a statue except for his fingers moving across the strings with a combination of grace and robotic precision. It was striking to see a person channeling his whole self through just his heart and hands. The sound that came out was astonishing — clear and powerful and unlike anything or anyone else. The music was so lucid and his intent was so strong that you didn’t hear what he played — you heard what he wanted you to hear, like some sort of musical Jedi mind trick.

Inspired by my brother, Ben, and best friend, Jay, both of whom were precocious electric guitar players, I decided that I wanted to play guitar too. I always had a good ear, but electric guitar never really clicked for me. There was a missing piece. When I was 14, my mom got me an instrumental Tony Rice record for Christmas called “Acoustics” that featured his string-band take on jazz. Something clicked. I’d admired Tony in a bluegrass context when he would sit in with the Seldom Scene, but this was something totally different. The tone, intensity and power of his guitar playing were absolutely captivating. The organic groove of the music was riveting. The melodic twists and turns were totally surprising but also easy to follow. Something happened in me, and my life was instantly changed. [It’s worth mentioning that there are literally thousands of people who will tell a variation on this story, about their life changing upon hearing him for the first time.] Tony Rice became my hero and I became a very deep disciple, studying his records to the deepest minutia. I would go see him play whenever I could. I had so many eureka! moments as I watched his hands render phrases that I’d heard on his records hundreds of times. As soon as I got home, these notes would be unlocked, and I could play them too. It was magical, and it brought me so much joy.

I went to Oberlin College to study music. Oberlin had a program called “winter term” where students could spend the month of January on self-designed educational projects that may not fit within the bounds of normal classes. My sophomore year, I was imagining what I wanted to do for winter term. Studying with Tony Rice was the dream, but obviously that would never happen. Tony was so untouchable that the idea seemed absurd. But then again, I actually knew him, and what would be the worst that would happen if I asked? I gathered up the courage, called Tony, and to my incredible surprise, he said yes. It was crazy — Tony Rice didn’t let people into his inner circle like that.

When the time came, I loaded up my guitar and went down to his house in North Carolina. It was one of the most important weeks of my life and fundamentally changed how I viewed music and what it meant to be a musician. (It was during this time that he singlehandedly resurrected my nickname, Critter, which everyone else had stopped calling me by the time I’d hit puberty.) Tony trusted me as a guitar player and didn’t feel like he had much to add on that front. He realized that playing an instrument is a superficial manifestation of being a musician: a means to an end but not an end itself. I was already on a path to becoming an accomplished guitar player. Tony wanted me to think about what it meant to be a great musician.

So he put on records, and we listened and listened and listened, and talked, and listened some more. He had an incredible stereo with two old 500-watt monoblock tube amplifiers on each channel and these enormous Urei control room speakers that he had bought from a recording studio that was going out of business. He fastidiously maintained his playback system and even had an oscilloscope hooked up to diagnose the smallest electrical issue that might interfere with the music coming through clearly and beautifully. It worked. I had never heard music sound like that before. Records that I knew inside out took on new life through his system. The music was so warm and real that it felt like you could reach out and touch it with your hand. That was a lesson in and of itself.

He related another lesson to me that he learned from the great jazz pianist Bill Evans. As a musician, you need to LOVE music: the sound of it, the flow of it, the humanity of it — everything about it. You should be able to listen to one note — one single long sustained note — and have it be a complete musical experience. It’s all in that one note if we’re open to it: timbre, dynamics, harmony… even rhythm! If you can hear the music in and truly love that one note, then just imagine how engrossing actual music can be. When you’re playing music, you have the best seat in the house. Don’t forget to listen, and don’t forget to love it.

What a simple, deep lesson. I still think about it today.

I remember him showing me some records and talking about some musicians who were particularly impactful on him. The legendary classical violinist Jascha Heifetz was a huge early influence, which may seem surprising but makes total sense when you consider the clarity and command with which Tony presented both his guitar playing and singing. There was a recording he particularly loved of Heifetz playing Bruch’s Scottish Fantasy.

He was also a huge lover of jazz. I honestly think Tony Rice spent most of his living hours in front of his stereo listening to jazz. Miles Davis was a big hero, and I would argue that, like Miles with jazz, Tony changed acoustic music several times. Think about it: Miles started out playing bebop with Charlie Parker, but quickly was leading his own bands through which he explored new concepts that became whole sub-genres: there was modal jazz like “Kind of Blue,” the deconstructions of his late ‘60s quintets and, a few years later, jazz fusion. Each of these phases in Miles’ career which might have lasted a few years each led to whole movements in music that people dedicated their lives to.

In the same way, Tony revolutionized the way people looked at bluegrass during his tenure with JD Crowe and the New South. They redefined the standards of musicianship in terms of timing, ensemble playing, harmony singing and song selection. There were other great branches on the bluegrass tree in the 1970s — like the Seldom Scene’s, or Sam Bush’s newgrass — but in terms of musical Darwinism, none was an evolutionary winner like JD Crowe and the New South. Professional bluegrass bands are still trying to sound like them today.

Tony’s next phase was no less impactful. In 1975 he left Kentucky and moved to California to pursue a new kind of instrumental string band music that the virtuoso mandolinist David Grisman had begun to develop. Grisman’s music incorporated improvisational concepts from swing and modern jazz, and form concepts from classical music. Their ensemble concept was novel as well. The instrumentation was two mandolins, violin, acoustic guitar and upright bass, but rather than embrace the rough edges that had always been native to bluegrass and gypsy jazz, they strove to play together with the smooth power of a steam engine and hive-mind sensibility of a string quartet. The band rehearsed for months, developing and refining their new “dawg” music before making their debut performance. When they finally emerged, the response was electric. No one had ever heard acoustic music like this before, and it was all built around Tony’s incredible, propulsive rhythm and lead guitar playing. For progressive pickers, the DGQ was like a North Star, illuminating a path that didn’t previously exist. Young musicians like Béla Fleck, Jerry Douglas and Mark O’Connor, all of whom would go on to forge new paths themselves, were set free by the DGQ. There was proof that these bluegrass instruments could now go anywhere and do anything.

I haven’t even mentioned Tony’s voice yet. Tony had one of the greatest and most singular singing voices in the history of bluegrass music. His is a warm clear baritone that rang like a horn but also could communicate words with breathtaking grace and sensitivity. He wasn’t the kind of singer who emoted much — his voice was almost stoic — but you believed everything that he was saying because it had so much dignity.

In the mid-1980s he made a couple of records, “Me and My Guitar” and “Native American,” that focused on the songs of writers like Gordon Lightfoot, Joni Mitchell and James Taylor. It was new to hear those songs presented so powerfully and elegantly in a string band context. There is a smoothness associated with much of the music on those records that one wouldn’t associate with bluegrass. But they are beautiful. With these records, Tony invented the template that Alison Krauss followed and perfected in her career. Alison, who played in Tony’s band when she was 15 and calls Tony her “all-time musical hero,” would be the first person to tell you this.<