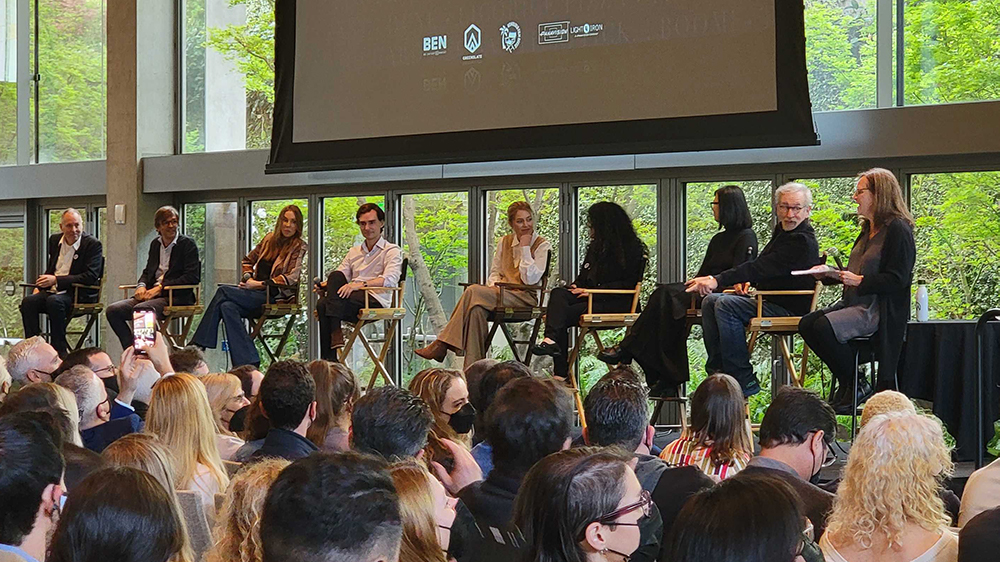 Ahead of tonight’s Producers Guild of America awards ceremony, the annual breakfast with the nominees for the Darryl F. Zanuck Award at the Skirball Cultural Center.

The theme of the panel, moderated by PGA president Lisa Fisher, was Steven Spielberg, nominated as one of the producers for his musical “West Side Story.”

During the conversation, the two-time Oscar-winning director — for “Schindler’s List” (1993) and “Saving Private Ryan” (1998) — shared with the audience that he’ll never direct another musical in his career, although he’ll be involved as a producer on some. He’s currently co-producing the musical adaptation of “The Color Purple” with Fantasia Barrino and Danielle Brooks in the lead roles. He helmed the 1985 Alice Walker adaptation, which was nominated for 11 Academy Awards and won him his first DGA prize, though he failed score an Oscar nomination for best director.

The adoration for Spielberg and the overall gratitude from all of the nominated producers was beautifully pronounced at the event.

In response to a question about how producers can be successful and enter the business, Spielberg replied by saying, “the smartest thing I do is hire women. I always have and always will. I believe in the power of the producer. You’re not just the leaders. You are therapists. I rely on someone stronger than me to produce.”

He reflected on the challenge of getting the rights to “West Side Story,” going to lyricist Stephen Sondheim’s home saying: “His dogs were sniffing my crotch, and I was afraid to push them away [as] I didn’t want to offend him.”

He was able to achieve his goal sharing that this was an opportunity to keep the Romeo and Juliet story alive for another 30 years. “My favorite channels are TCM and the Criterion Channel, but they don’t get the highest ratings.”

Fisher opened by thanking everyone, telling the film producers in the room that they have “prevailed”: “They tried to kill us but couldn’t.”

She also highlighted the diversity of this year’s crop of producing nominees, which includes nine female producers. Fisher indicated that nearly 50% of the guild is composed of women.

The support that was given by streaming giant Netflix was also a common talking point among its three nominated films.

Tanya Seghatchian reveled in the brilliance of her producing team, especially from “Power of the Dog” director and writer Jane Campion. The rights to the Thomas Savage novel had went through multiple hands over the past 55 years, including classic actor Paul Newman, who was going to play the lead character Phil Burbank, portrayed by Benedict Cumberbatch in the final film.

Oh attended one of only five performances that took place in New York starring Lin-Manuel Miranda. She initially wasn’t aware of the show and was surprised the rights were available.

Kevin Messick talked about the “urgency for climate change” in “Don’t Look Up” and how Adam McKay wrote the film with Jennifer Lawrence in mind. Most poignant was his answer for the roughest day of production; “The worst day was January 7,” referring to insurrection attacks on the capitol.

Todd Black spoke about wanting to make a movie about Lucille Ball’s life in 1995, but the comedian’s children didn’t want it at the time. He also shared he knew “Aaron Sorkin was the right man to write it” regarding the eight-year journey to get the film made.

Philippe Rousselot started his opening remarks by acknowledging the strong year for movies. Discussing the journey to get “CODA” made, and ultimately sold at Sundance for a record $25 million to Apple, he said, “It’s been the most extraordinary journey of my producer life.”

Mary Parent had been watching the rights for “Dune” go through various hands, waiting for the right opportunity to seize the moment. That moment came after multiple “hard passes” from various studios. It was during the shooting of “Godzilla” (2014) that she pitched the production to Alex Garcia, selling the project to Legendary in 2013. She also talked about seeing an interview with Denis Villeneuve where the director shared that he waned to helm an adaptation of the famous novel since he was 14, knowing in that moment that she had found her director.

Parent almost hinted that “Dune: Part II” is “not a sequel. It’s half of the story.”

“King Richard” producer Tim White recalled seeing the real life Richard Williams, who is played in the film by best actor frontrunner Will Smith, holding signs at a 1999 tennis match in Miami, well before he knew he wanted to make movies. Along with his brother and producing partner Trevor, the pair emailed Venus Williams saying that they wanted to tell the Williams sisters’ story, receiving no response: “The odds [were] against us,” White says. “We have absolutely no access to the Williams family.”

Sara Murphy talked about the story of “Licorice Pizza” ruminating in writer-director Paul Thomas Anderson’s mind for a long time. She talked about Anderson spending a lot of time with producer and former child actor Gary Goetzman, whom Cooper Hoffman’s character Gary is based upon, following the death of Oscar-winner Jonathan Demme. Murphy said one of the most challenging items was “getting Gary to sign a life rights agreement.”

Branagh championed his three female producers — Laura Berwick, Becca Kovacik and Tamar Thomas — and recalled everyone’s availability during the pandemic. He heard back from two of his stars, Caitríona Balfe and Jamie Dornan, within hours of sending them an initial email regarding the project. Branagh also recalled showing the semi autobiographical “Belfast” to his family: “There was Tremendous uncertainty. The most difficult moment was showing this personal story about my family, to my family. My brother saying that things that I say happened to me, happened to him.”