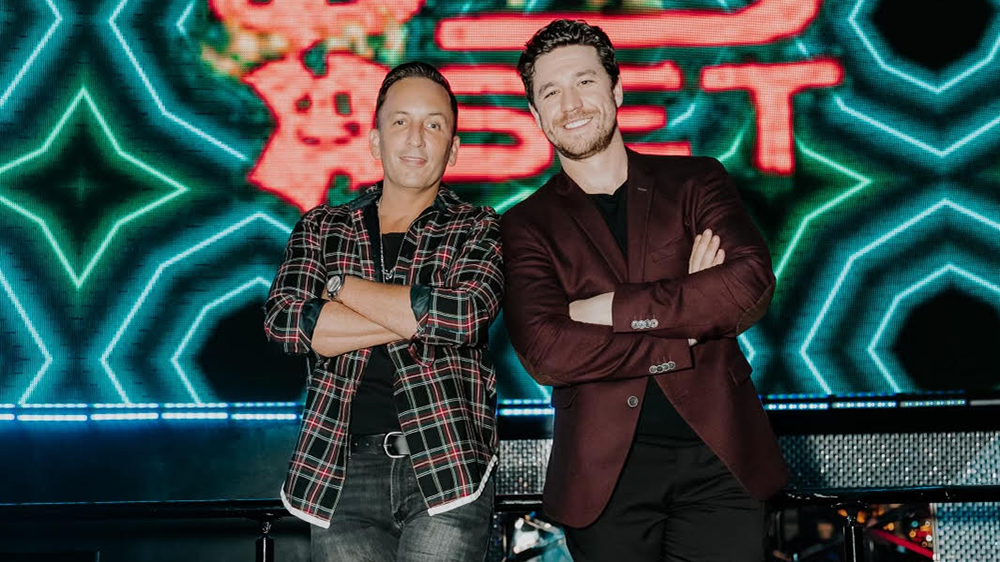 + Gaming lifestyle brand XSET has teamed with music equipment giant Roland — maker of the TR-808 drum machine — for a new clothing collection called Drop The Bass. Celebrating the cultural impact of the 808, which has soundtracked seminal work by the likes of electronic dance music pioneer Giorgio Moroder and on albums by Kanye West (“808 Heartbreak”). The collection comes by way of noted streetwear designer Dennis Calvero and the iconic Roland logo and digital specs of the TR-808. The line, which includes bucket hats, T-shirts and hoodies, among other apparel and accessories, launched today (Sept. 2).

“It’s an honor to partner with an incredible brand like Drai’s,” said XSET chief business development officer Clinton Sparks, pictured at left. “They are the number one hip hop club in the world — and understand not only the space but also how to produce unforgettable events and experiences. The fact they have the vision and innovative spirit to bring this to the culture and community makes XSET extremely excited to call them partners.”

“We couldn’t be more excited to collaborate with XSET, which is quickly emerging as a leader in the esports and gaming space, to bring unprecedented activations to Drai’s,” said Dustin Drai, vp of marketing and entertainment for Drai’s Las Vegas (pictured at right). “This partnership is a colossal step in furthering the evolution of the gaming and nightlife communities, and we look forward to creating unmatched experiences with XSET.”

+ Sabrina Hutchinson, the veteran publicist and agent for media music composers, has formed Defiant Talent Management. She ran Defiant Public Relations for several years and until recently was an agent with First Artists Management.

The Recording Academy, Berklee College of Music Institute for Creative Entrepreneurship and Arizona State University have announced the launch of the “Women in the Mix Study,” which will survey women and gender-expansive people working in the American music industry to better understand their roles and realities within the field. According to the announcement, the goal of the survey is to help inform diversity, equity and inclusion objectives and goals within the Recording Academy, the industry at large and advocacy groups working in this space. The survey is open through Sept. 20 to all women-identifying and gender-expansive professionals actively working in the music industry and is accessible here.

“We continue to embrace our responsibility to inspire and influence meaningful change for women in music,” said Valeisha Butterfield Jones, Co-President of the Recording Academy. “The Women In The Mix Study is the next key step in our commitment to deliver on this important work. Participation is mission-critical to gathering strong data to accelerate progress, and we encourage anyone working in music who identifies as a woman or as gender-expansive to take this survey and ask others in their music networks to do the same.”

“I am honored to expand on the impactful work initiated during my time at Berklee as I embark on my new journey at the Academy,” said Panos A. Panay, Co-President of the Recording Academy. “This survey will help us better understand the realities and aspirations of our peers and what crucial steps we as an industry must take to create a better world for women and gender-expansive people in music.”

Building upon baseline results constructed by the 2019 study by Berklee and Women in Music, “Women in the U.S. Music Industry: Obstacles and Opportunities,” the study will examine progress since the initial report, identify where continued work is needed, include expanded gender identities, further explore pathways into the industry, and look further into the roles of women in music. Allies are invited to forward the survey to acquaintances that meet these requirements and are working in music. The study, including the survey results, will be published in January 2022.

+ Live Nation announced that Fabiana Kulick has joined the Concerts team as their new Head of Latin Marketing. She will lead marketing for Live Nation’s portfolio of Latin tours, as part of Live Nation Concerts’ Talent & Touring team and Marketing team, and be responsible for developing dynamic strategies for each artist, including national marketing efforts across mainstream and Latin media, with a focus on traditional and non-traditional marketing as well as media partnerships, integrated marketing strategies and more.

Most recently, Kulick worked as senior label manager and director of international repertoire at Warner Music Latina. In 2008, she managed artists and worked on production and marketing of live shows for artists such as Juan Luis Guerra, Calle 13, Tego Calderon, Earth Wind & Fire, David Guetta and others.

“As we continue to see the incredible rise of Latin music and touring to the forefront of mainstream culture, it is more important than ever that our Latin team continues to grow with and reflect the music and artists we are putting out on the road,” said Omar Al-joulani, Head of Talent & Touring for Live Nation Concerts. “Fabi’s brings nearly two decades of knowledge and experience working in the Latin space and we couldn’t ask for a stronger leader to head up our marketing efforts as we continue to ramp up the return of live music.”

+ Oak View Group, the global venue development, advisory, and investment company for the sports and live entertainment industries, has named Chris Granger to lead OVG Facilities as its CEO. Based in Detroit, Mich., Granger will report to OVG CEO Tim Leiweke. His appointment comes on the heels of OVG’s announcement earlier this week to merge with hospitality provider Spectra to create a full-service live events company.

In his role, Granger will oversee OVG Facilities, OVG Media & Conferences, and the 32-member OVG Arena Alliance, and will also focus on sustainability, public safety, and sanitization solutions across all venues.

Most recently, Granger was group president of sports & entertainment with Ilitch Holdings, responsible for all aspects of business operations for the Detroit Tigers, the Detroit Red Wings, the company’s joint venture interest in 313 Presents, and the operations of Little Caesars Arena, Comerica Park, Detroit’s historic Fox Theater, DTE Energy Music Theater, Meadow Brook Amphitheater, and Michigan Lottery Amphitheater at Freedom Hill. He previously served as president of the Sacramento Kings and Sacramento Basketball Holdings; previously, he worked in various capacities for the NBA for 14 years.

Leiweke commented, “As we grow as a company, there are priorities that we have set to guide that growth. First, character, in all aspects of our organization. Second, a commitment to lead the industry and change the conversation. Third, to not operate in fear. What I admire most about Chris is he is a living example of all three. Anyone and everyone that has worked with him knows he is a class act and leads by example. In addition, he is like us, dreaming for what we could be as an industry and thinking outside the box. And finally, he believes that this is the time for us to be bold, to be entrepreneurial, and to grow this industry.”

+ Universal Music Enterprises (UMe) has named Susan Hilderley executive VP of business affairs. She will be based in Los Angeles and report to president/CEO Bruce Resnikoff. Hilderley will ovesee all legal matters for UMe and will work closely with Resnikoff and other senior executives to develop and execute new business and legal strategies. She will also be working with artist managers and attorneys, as well as all UMe departments, to help facilitate UMe’s opportunites to grow revenues through both traditional and non-traditional channels.

“Susan brings exemplary leadership skills, knowledge, and longstanding relationships with artist managers and attorneys to UMe,” Resnikoff said. “She is uniquely qualified to understand all aspects of our business with her extensive label experience at Geffen and IGA as well as her experience representing A-list artists at a top law firm.”

Hilderley joins UMe from King, Holmes, Paterno & Soriano, LLP. She previously held several roles at UMG over more than 20 years, most recently serving as the executive VP and head of business and legal affairs at Interscope Geffen A&M Records. She began her career at Mitchell Silberberg & Knupp LLP. She is also the co-creator and instructor for the UCLA School of Law Music Industry Clinic, which gives law students the opportunity to represent real clients in the Los Angeles music community under the supervision of a licensed attorney.

RCA Records has announced the appointment of Carolyn Williams to the newly created role of executive vice president. According to the announcement, she will work with RCA’s executive team to oversee the company’s artist and label brand-management and marketing operations. RCA’s marketing, brand partnerships and touring and events departments now will report to Williams and she also will co-lead the newly created creative and content development team. Additionally, Williams will continue to lead RCA’s diversity, equity and inclusion initiatives where she will drive larger activities at the label and within the broader music industry.

Most recently, Williams served as RCA’s EVP of marketing, where she served as the marketing lead for Jazmine Sullivan, H.E.R., Chris Brown, SZA, Alicia Keys, D’Angelo, Brockhampton and Childish Gambino, among others. Prior to RCA, she was with J Records (which merged with RCA in 2011).

Williams is an active member on the Executive Committee for the She Is The Music organization and is Co-Chair of the NY Chapter. She is also a co-founder of The Spark, an RCA Records quarterly thought leadership program created to generate ideas and conversation on a variety of topics with a mission to keep the company continuously connected and learning together. In 2020, she played a key role in developing Sony Music’s Your Voice, Your Power, Your Vote initiative. Williams is also the Executive Sponsor for RCA’s Black Music Action Committee.