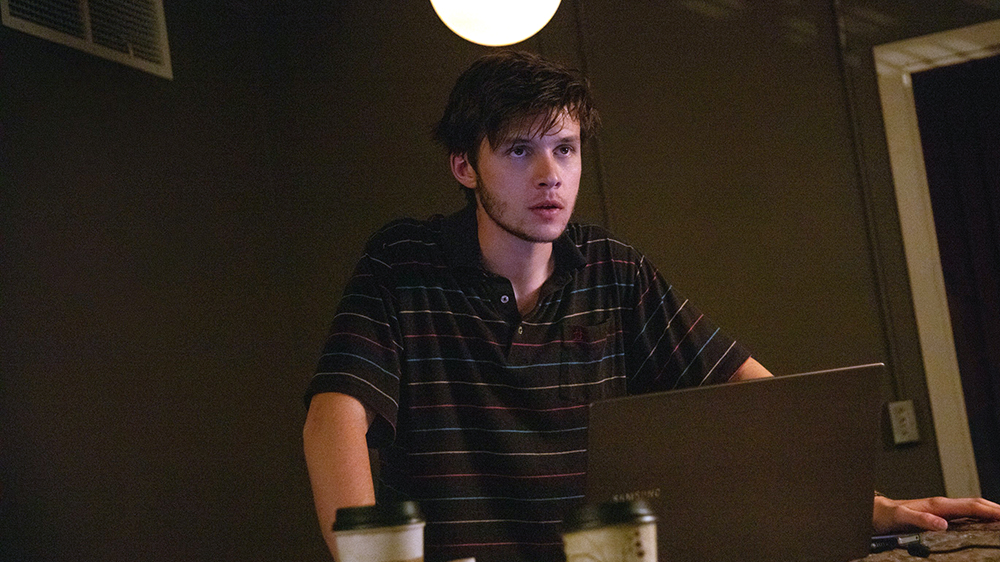 When a dramatic feature film gets made out of an investigative magazine article, there’s usually some conventional heroic hook to it (the fight against corporate malfeasance, a think-different athlete or artist, and so on). But not always. “Silk Road,” written and directed by Tiller Russell, is a fervently topical, at times intriguing, but ultimately rather sketchy drama about the online black market that started up in 2011 as the first major capitalist enterprise on the dark web.

During the two years of its existence, Silk Road was an underground Amazon or eBay of drugs — a platform where dealers and buyers could find each other, which meant that you could order a nicely priced package of cannabis or Ecstasy or pharmaceutical-grade cocaine and have it delivered to your door through the U.S. Postal Service. The person who dreamed this all up, and operated the site under the cult-like pseudonym Dread Pirate Roberts (yes, from “The Princess Bride”), was Russ Ulbricht, a 26-year-old libertarian gadfly from Austin, Tex., who convinced himself that by creating an underground marketplace for illegal narcotics, he was striking a blow against the system.

Ulbricht was the subject of David Kushner’s 2014 Rolling Stone magazine piece “Dead End on Silk Road: Internet Crime Kingpin Ross Ulbricht’s Big Fall,” and when you read the article it’s easy to accept Ulbricht as a fascinating renegade, even an emblematic figure of his generation, without pretending to like him. If anything, it made the story more gripping that he was an opportunist, a junior tech-head megalomaniac, and an upper-middle-class hustler who was deluded — and vain — enough to think of himself as a freedom fighter.

But when you see Silk Road, which is based on that Rolling Stone story, and you watch the up-and-coming actor Nick Robinson, in flip-flops and a wispy beard, playing Ulbricht as a fusion of Shawn Fanning and some misunderstood youth-movie crusader, it’s all but intrinsic to the nature of movies that we’re asked to form some sort of sympathetic attachment to him. And in this case, that’s a problem, because while Robinson is a likable actor, the movie, unlike the article, can’t just present Ross Ulbricht and his misbegotten rebel-in-the-wasteland nihilism as a sign of the times. It needs to get us “on his side,” and what that comes down to is creating a character who’s like some go-for-it Tom Cruise hero of the ’80s, only with an agenda that gets cringier by the second.

How did Silk Road actually work? That’s the first thing you’d want to know from any movie about it, but “Silk Road” skimps on the details. Ross, when we meet him, has already failed at a video-game startup and something called Good Wagon Books, and when he gets the inspiration to sell drugs online, he’s fired up by a missionary zeal for creating a world without rules. “You despise Amazon,” points out Julie (Alexandra Shipp), the young woman he has just stared seeing. “But I love freedom,” he says. Okay, but how does he set up the site? We see him watching a YouTube tutorial on the Tor browser, which allows one access to the dark web, and he explains, in broad terms, how the site will use bitcoin, so that even the monetary exchanges will remain un-encrypted.

Beyond that, though, the logistics remain awfully sketchy. “Silk Road” would like to be a renegade version of “The Social Network,” but that movie devoted a lot of its running time to showing us exactly how Facebook came into being. Here, we have to take Ross’s underground acumen on faith. Yet Silk Road all but markets itself. How could it not? It’s selling to an America — and 17 other nations — of addicts. When Ross succeeds in placing an item about it on Gawker, the site blows up. From that point on, he’s raking in $1.2 digital dollars a day.

In a parallel plot, the film traces the fortunes of a law enforcer who gets on the trail of Silk Road. Rick Bowdon, played with gruff, bearish volatility by Jason Clarke, is a DEA agent who, after blowing his gasket too many times, has been taken off the streets and assigned to the cybercrimes unit. For him, it’s a real purgatory, since he scarcely knows how to operate his office computer. But with a few lessons, and some help from his former street informant (Darrell Britt-Gibson), he starts taking dives into the dark web, and he opens up a clandestine line of communication with Ross. It’s a cat-and-mouse game that Ross doesn’t know he’s playing, and the way Bowden tightens the noose is gruesomely compelling. He tricks Ross into ordering hits on people — that is, on anyone who would threaten to shut down Silk Road. Is this kid really a killer? No. But he’s so messianically invested in himself that he’ll do anything to protect Silk Road.

Ulbricht is now serving life in prison. That was probably too harsh a sentence, but a point was being made: Just because breaking the law on the Internet is so easy shouldn’t give it cachet. That’s a lesson the film itself should have hit home more forcefully. Nick Robinson has moments (like the one where he’s nervously ordering a hit on someone while waiting to join his family at a restaurant), but he makes you wish he’d had a more layered part to play. Clarke, a forceful actor, makes Bowden the street-cop dinosaur into a figure you almost care about. The rest of the movie’s sympathizes are fuzzy, though it works up a bit of droll interest in Curtis Clark Green, the Utah slacker-hipster-hacker who becomes Ross’s sole employee. Paul Walter Hauser, from Richard Jewell, plays him as the dissolute soul of the new machine. For a moment, we marvel at how the brave new world of Internet commerce and “freedom” come down to some dude in his living room selling illegal substances as if he were an employee at McDonald’s.