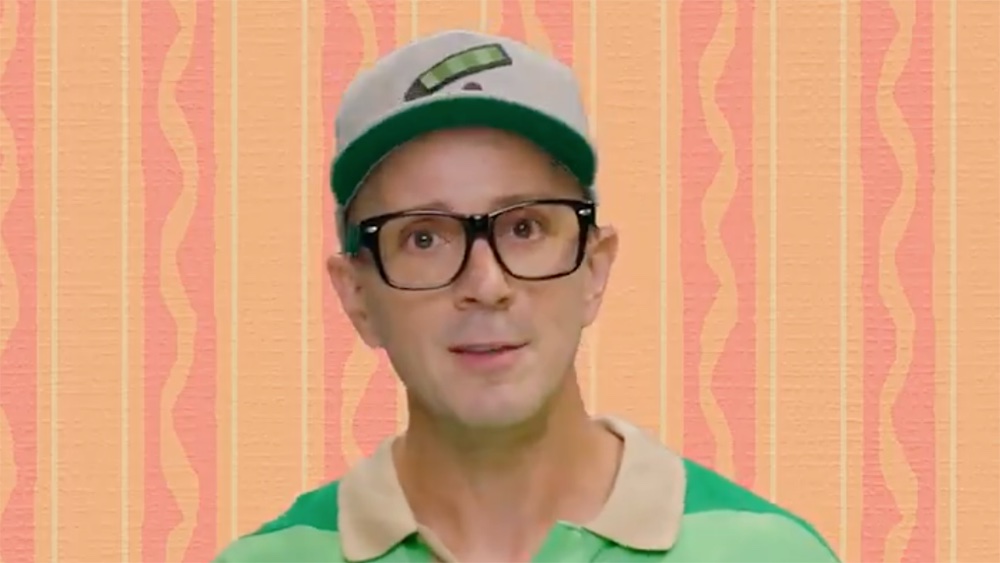 Original “Blue’s Clues” host Steve Burns has finally clued the world into why he left the popular children’s show in 2002. In a viral clip posted to Nick Jr.’s Twitter account, Burns explained that he decided to go to college.

“You remember how when we were younger, we used to run around and hang out with Blue and find clues and talk to Mr. Salt and freak out about the mail and do all the fun stuff?” Burns said. “And then one day, I was like, ‘Oh hey, guess what? Big news, I’m leaving. Here’s my brother Joe, he’s your new best friend,’ and then I got on a bus and I left and we didn’t see each other for like a really long time? Can we just talk about that? Because I realize that was kind of abrupt.”

Burns continued, explaining that he left to pursue higher education: “I just kinda got up and went to college. And that was really challenging by the way, but great because I got to use my mind and take a step at a time and now I literally am doing many of the things that I wanted to do.”

Sporting the same green shirt and hat as he did on the series, Burns then directly addressed the viewer in an unexpectedly emotional and validating way.

“And then look at you, and look at all you have done, and all you have accomplished in all that time. And it’s just, it’s just so amazing, right?” Burns said. “I mean, we started out with clues, and now, it’s what? Student loans, and jobs and families? And some of it has been kind of hard, you know? I know you know.”

Burns continued on that tender note, thanking those who watched him for helping him get to where he wanted to be in life.

“I wanted to tell you that I really couldn’t have done all of that without your help. And in fact, all the help that you helped me with when we were younger is still helping me today, right now. And that’s super cool,” Burns said. “I guess I just wanted to say that after all these years, I never forgot you. Ever. And I’m super glad we’re still friends.”

Burns then ended the clip with a dose of humor, saying: “You look great by the way. Whatever it is you’re doing, is working.”

So about that time Steve went off to college… #BluesClues25 pic.twitter.com/O8NOM2eRjy

Burns’ sudden departure from “Blue’s Clues” in 2002 sent the rumor mill churning, with many speculating that he had died from a car accident or drug overdose. Burns even appeared on “The Rosie O’Donnell Show” and “Today” to dispel the falsehoods. Since leaving “Blue’s Clues,” Burns has released an album and held several minor acting roles.

Burns has also appeared in Nick Jr.’s on-air promotions recently in celebration of the 25th anniversary of “Blue’s Clues.” But the Twitter clip sent social media roaring, with many reminiscing on the impact Burns had on their childhood and discussing the video’s emotional nature. View some of the best Twitter reactions below.

far too old to be sobbing over blues clues and yet…here i am pic.twitter.com/Bw0jeNiSx5

steve from blues clues: i never forgot you 🥺🐶💙

I didn’t even know I needed Blues Clues closure until now. https://t.co/UJGnnto11i

Nickelodeon will bring “Barbapapa” to young viewers around the world after sealing an international deal for the new adaptation of the classic 1970s kids picture-book series for its Nick Jr. channel.

“Barbapapa” dates back to the 1970s when French-American couple Anette Tyson and Talus Taylor created the property. A subsequent toon series was popular internationally, airing in over 40 countries. Japanese producer Kodansha the made a second series in the late 1970s and a third in 1999.

Nick has now stepped up and acquired a new upcoming adaptation, which will be produced by French animation house Normaal. The preschool series was commissioned by France’s largest commercial broadcaster TF1 for its Tfou kids service and announced at Annecy/MIFA 2017. It delivers in 2019.

The blob-shaped Barbapapa family, who can morph into other forms but retain their original colors, will come to life in a 52x11mins 2D series. It will be written and brought to life by Alice Taylor and Thomas Taylor.

“Nickelodeon has a successful track record of supporting beloved IP and finding new audiences for it around the world,” said Layla Lewis, SVP, global acquisitions and Content Partnerships for Nickelodeon. “We’re thrilled to partner with Normaal to introduce the long-awaited new ‘Barbapapa’ series to preschoolers.”