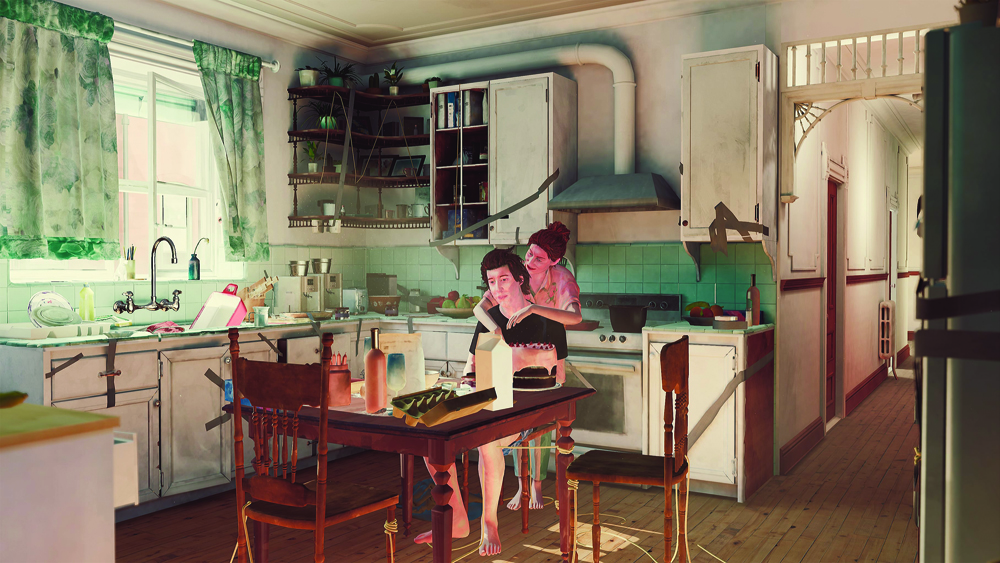 Upon learning of “Marco & Polo Go Round” and the film’s surrealist premise, execs at VR distributor Diversion Cinema jumped at the chance to distribute, even if the project’s delivery date was still several years away.

“It was such a strong idea,” says Paul Bouchard, Diversion head of acquisitions and sales. “Today there are so few VR titles that deal with interpersonal relationships, whether as comedy or drama. It had an angle and intent that felt so original and unique.”

Recently completed and making its world premiere at the NewImages and Tribeca festivals, the Canadian-Belgian production takes a kitchen-sink drama and quite literally turns it upside down.

Helmed by Montreal-based director Benjamin Steiger Levine, “Marco & Polo Go Round” follows boyfriend Marco (Emmanuel Schwartz) and girlfriend Polo (Léane Labrèche-Dor) as they stumble into a couple’s dispute one hazy, hungover morning. Only, as the couple’s argument heats up, gravity somehow reverses, sending appliances, furniture, and eventually the leads themselves off the ground and into the sky.

“Seeing a forceful but seemingly ordinary interaction turning the world on its head was such an irresistible visual,” Bouchard explains, “[that] we boarded very early on.”

Since its launch in 2016, the French outfit has aimed to put together a premium catalog and carve out an ever-changing path in the still nascent world of VR distribution. In recent years Diversion has organized installations with Venice VR and at Paris’ Cent Quatre cultural center while adding titles like “Ayahuasca – The Shamanic Exhibition” and the Kubrick tribute “Odyssey 1.4.9.” to its library.

Preferring to offer curatorial and logistical support to partner festivals and cultural institutions on an à la carte basis, Diversion has, thus far, opted against setting up a fixed location theater.

“We tend toward a more fluid distribution dynamic,” says Bouchard. “We believe it more important to work with different clients on standard or tailor-made installations, which over time can evolve or adapt, depending on the budget, and depending on programed title. We need that flexibility.”

“Without a distributor, so many titles never quite make it off the festival circuit,” he continues. “Our project is to accompany our titles, to develop with our colleagues and collaborators a durable network that can bring these titles to the public.”

“We want to keep these works are accessible and to makes sure they are shown in the best possible conditions. That’s our project, and that’s our plan for ‘Marco & Polo Go Round.’”

‘The Passengers’ Explores a Chance Encounter on Train

Making its world premiere at Paris’ NewImages Festival ahead of an October berth at Montreal’s Festival du Nouveau Cinéma, the Canadian-French production “The Passengers: Her and Him” presents an interactive, location-based VR piece that covers a chance encounter from two different perspectives – and still only tells half the story.

This work-in-progress, written by French screenwriter Nicolas Peufaillit (“A Prophet”) and directed by Quebecois multi-hyphenate Ziad Touma (“Saved by the Belles”), will eventually offer an interactive multi-user experience consisting of four chapters, synchronized to be experienced by four viewers simultaneously.

Set in the cabin of a moving train, the interactive experience will exist as four interlocking and interacting films, each one fixed to a different passenger’s perspective.

“The version that we’re showing features a woman and a man [named Her and Him],” explains Touma. “At the same time, we’re finishing production on the other two parts, featuring an older Lady and young Child. Once you put on the headset, you are really immersed in your character’s mind. You’ll see the three other characters in front of and next to you, and you’ll hear the thoughts of the character you are embodying.”

“The project is really about getting to know what goes on in someone else’s mind,” Touma continues. “[It’s built on that moment when] you’re travelling and you see another person and wonder, what’s going on in their head?”

The filmmaker designed this project as an exercise in full-on embodiment, with those thoughts leading to live-action, stereoscopic flashbacks. But participants can do more than glimpse their characters’ pasts, they are also able to affect their futures via actions taken in game.

“You have to help the character accomplish their quest by either speaking out loud or doing hand gestures,” Touma explains. In “Her” and “Him,” for example, both characters are fighting their own internal battles, which can be overcome via participant interaction and vocalization. Only each vocalization changes the story for everyone else.

“The stories influence each other. If one person speaks, it changes the other person’s film,” Touma continues. “So we’re trying to be as fluid as possible to how the user perceives the world, because they manage to create a new narrative every time. “

The project’s myriad variables required years of scriptwriting and development, forcing the filmmakers to approach the story in a very different way. “Instead of something linear, the script was written in columns,” says Touma. “Because it’s interactive, you have to approach the narrative in three dimensions. When I printed out the script pages, I could stack them on the floor and walk between them.”

In terms of variables, each of the four parts will employ a different visual style, with “Her” depicting the world in watercolor, and “Him” in oil painting; subsequent entries will be rendered in pencil and felt tip marker. More ambitious still, the filmmakers mounted the entire project in two languages, shooting versions in both English and French.

“For the U.S. and world market, it has to be in English, but we wanted something to offer French Canada and France as well,” Touma explains. “In VR you can’t really do subtitles, and it’s not something you can dub. So you really have to go all in.”