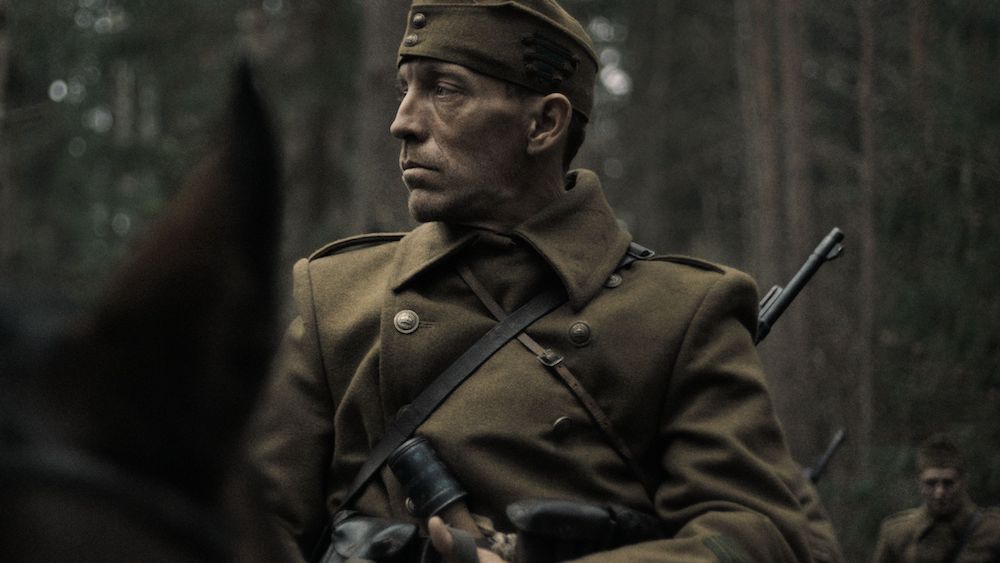 Having imbibed the visual qualities of Andrei Tarkovsky and Sharunas Bartas, “Natural Light” director Dénes Nagy delivers exactly the sort of forest-bound World War II movie one might imagine from a first-time helmer smitten by such masters. Technically impeccable and rigorously cleaving to an aesthetic designed to keep the viewer at arm’s length, the film is so intent on privileging the soldier protagonist’s immovable face (when not focusing on the back of his helmet), so determined to keep him frozen and unknowable, that Nagy dispenses with that key ineffable quality: human emotion. Audiences amenable to cold, meticulous shots where people are accorded the same attributes as a landscape will find elements to admire, and certainly on a cerebral level there’s much to appreciate, yet “Natural Light” sheds no warmth and offers no insight into the horrors of the human condition during wartime.

During the Second World War, thousands of Hungarian soldiers, aligned with the Axis Powers, patrolled vast swathes of the occupied Soviet Union, keeping an eye on fractious partisans. In this setting, the peasantry exhibit an active disdain for these invaders who’ve interfered with their hardscrabble lives, and the soldiers are ever alert to poaching and insurrection. Corporal István Semetka (Ferenc Szabó) is there to do his job, nothing more, nothing less. From his weary, static face we suspect he’s seen a fair share of suffering, and after eight months without leave, he’s existentially tired, but still a reliable cog in the military machine.

Unlike most of the soldiers, Semetka isn’t bullying or abusive, and when he follows the trail of some pilfered cheese, he investigates but doesn’t report the infraction. It is odd though that when given a bucket of luscious wild berries in exchange for not hauling in the petty thief, Semetka accepts but then dumps the contents onto the ground after leaving the house. (No one in wartime would ever waste such a precious gift, so the only conceivable explanation for his action is that the bright red color offended the film’s aesthetics.) When his commander is killed in an ambush, he takes charge of the unit until relief comes.

At some point, we learn that Semetka has a mother living and a “fine, tall son,” but that’s the extent of what we know of his background. Nagy deliberately withholds any further information, wanting the viewer to glean everything from the setting and his inscrutable face. Apart from his fixed stoicism, all that we sense from this unyielding figure is that the war has yet to destroy the ounce of humanity buried deep in his exhausted soul. Following the ambush, he’s charged with keeping watch on the villagers herded into a barn; Semetka can be relied upon to adhere to the rules of engagement, but the same can’t be said for newly-arrived Sergeant Major Matyas Koleszár (László Bajkó).

As an audience we’re meant to feel revulsion for the war crime about to take place, but it’s so over-signaled that there’s no true sense of horror, due also to the way Nagy stubbornly resists allowing any emotion to creep in. The unrelieved uniformity of the diffused light, barely shifting between twilight and penumbral, combined with the enclosed nature of stark birch forests that feel at times like giant cages, create a deadening environment which turns wearisome long before the film’s supposed climax.

Given that he doesn’t want his actors to express themselves, it’s not surprising Nagy chose only non-professionals. However, his casting for the Russian villagers, selected for their resemblance to thick-featured faces one might see in Brueghel’s depictions of primitive peasantry, has a disturbingly Darwinian feel, as if the director considers them slightly lower on the evolutionary scale. In a film where a lack of expression is meant to convey humanity’s inner struggle with good and evil, perhaps that kind of physiognomic hierarchy is designed to add a further level of atmosphere, but it smacks of something darker.

“Natural Light” is the name of the 2014 novel from which Nagy adapted a small section, though it was clearly also an inspiration for the film’s visual design. From the opening shot, of a raft in the middle distance with a large moose carcass heading to a desolate snowy bank, Tamás Dobos’ majestically composed cinematography elicits detached admiration, its stillness furthering the sense of entrapment. Soon after, a rustic meal in a peasant house, lit solely by a gas lamp, evokes 17th-century paintings of earthy candlelit interiors, attractive yet feeling like a recreated tableau rather than fitting into the overall scheme. Impressive sound design adds much-needed life to many of the images.