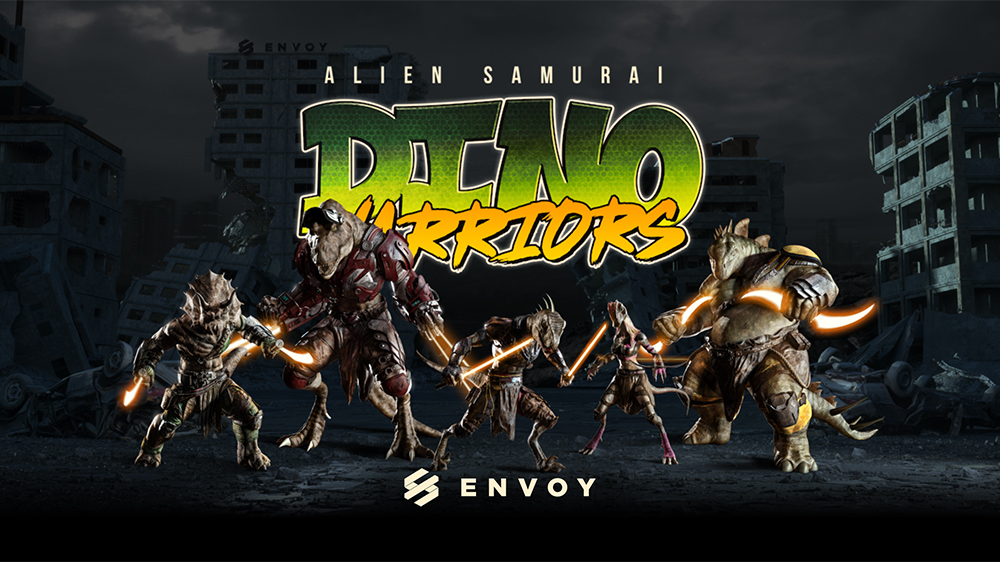 Dimitri Thivaios, of chart-topping EDM duo, Dimiti Vegas and Like Mike, has teamed up with Michael Uslan, executive producer of the “Batman” extended universe, and his son, David, an expert in the animation and graphic novel field, to create an NFT art collection of Thivaios’ upcoming comic book characters, Alien Samurai Dino Warriors.

The collection, which drops on the newly-established ENVOY Network in September 2021, serves as an introduction to the graphic novel series of the same name, which is set to launch the first half of 2022.

The series revolves around a group of teen dinosaurs who defend a modern-day Earth through martial arts. The dinosaurs, who follow the code of the Samurai, are armed with glowing (similar to a lightsaber) weapons that are powered by a crystal. Alien Samurai Dino Warriors is Thivaios’ first entertainment property. (Watch the trailer above.)

Says Thivaios: “Dino Warriors is very special to me and is inspired from my love and passion for ‘80s comics and cartoons. I have been developing this project for a long time now, so translating this into an NFT-fueled powerhouse with the groundbreaking ENVOY Network has been very exciting. It allows us to turn those NFTs into keys to unlocking amazing content and being much more than just an asset.”

The NFT collection includes moving 3D statues of the five Dino Warriors as well as trading cards in various styles. There are four tiers collectors can buy into: Diamond, Gold, Silver and the more affordable Community.

To access the NFT collection, fans must pre-register at Dinowarriors.io in order to receive updates, which will come via dedicated Discord and Telegram communities.

In addition to the Uslans, the Alien Samurai Dino Warriors comic book team also includes the writing talents of cartoonist/writer Erik Burnham, who is known for the graphic novel versions of “Ghostbusters,” “Back to the Future,” “A-Team” and “Teenage Mutant Ninja Turtles.”

Also on board is graphic novel writer Heather Antos who successfully launched Marvel’s “Star Wars” series, co-created its Gwenpool character and is the lead of its and Idea and Design Works’ “Star Wars Galaxy.”

Says Antos: “It’s always exciting to work with passionate creators. There are few creatives I’ve met who can match Dimitri’s passion for comics. Dino Warriors is the perfect blend of action and whimsy that is sure to hook readers both old and new. I couldn’t be more thrilled to be a part of this great team.”

Alien Samurai Dino Warriors is a multi-product IP whose graphic novels artists, editor, video game publisher, animation show producer and live action movie producer are yet to be revealed. Based on the caliber of creatives involved thus far, they promise to be impressive.

Dino Warriors is the latest in the Belgian/Greek Thivaios’ creative portfolio, which, in addition to his formidable DJing and music producing career, includes acting with roles in “Jurassic World 3: Dominion,” “Rambo” and Jean-Claude Van Damme’s “Lukas.”