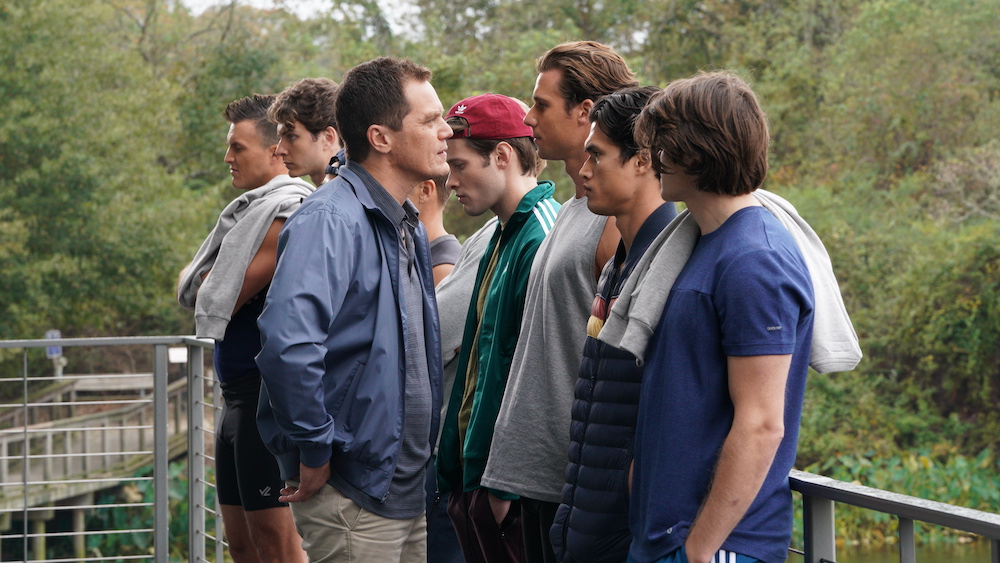 As inspirational college sports movies go, “Heart of the Champions” doesn’t go, or row, nearly far enough off the beaten path. It’s every bit as boilerplate as its generic title might indicate, distinguished only by its focus on an underdog rowing team rather than the amateur baseball, basketball, football or hockey players usually involved in similar scenarios. There’s just so much even a fine actor like Michael Shannon can do to freshen such stale material, even when he’s given a plum role as a demanding coach who expects the impossible from his young charges. Of course, he might have been able to do more had he also been given more screen time, but, alas, we’ll never know.

The time is 1999-2000, and the place is the fictional Beeston University (played, quite convincingly, by Louisiana State U.), an institution of higher learning that desperately needs a new coach after its rowing team finishes dead last in a national championship. Enter Jack Murphy (Shannon), a Beeston alum with extremely mixed emotions about returning to his alma mater, and guilt-racked memories about former rowing-teammates he lost in Southeast Asia. He is offered the job of rowing coach only because of some rigorous string-pulling by Singleton (David James Elliott, oozing sleaze), an administrator who used to compete with Murphy on the Beeston team.

Mind you, Singleton doesn’t grease the skids for Murphy because they’re bosom buddies. In fact, their relationship would have to be several degrees warmer for them to quality as frenemies. But Singleton wants a take-charge coach to showcase his son, crew captain Alex (Alexander Ludwig), in the hope of attracting the attention of Olympics scouts.

Coach Murphy proves to be long on aphorisms — “No man is an island!” — and short on patience when he feels the young rowers are underachieving. His training tactics are just short of sadistic, which he freely acknowledges. “I know your hands are raw meat,” he tells them after an extended afternoon on the water. “And your lungs are burning. And you all hate me right now.” One can only assume the rowers do not voice agreement because at that point they are too busy gasping for breath, or throwing up.

Director Michael Mailer and screenwriter Vojin Gjaja propel their narrative with all the imagination and enthusiasm of store clerks ticking off items on an inventory list. Demanding new coach and egocentric crew captain immediately clash? Check. Crew captain fumes because his former girlfriend (Lily Krug) is now canoodling with his rival for team leadership (Alex MacNicoll)? Yep. Troubled transfer student (Charles Melton) reluctantly — very reluctantly — commits to both the rowing team and a bright fellow student (Ash Santos)? Got it. Someone conveniently dies just in time to inspire the overmatched Beeston rowers as they compete against an elite Harvard team? Of course.

To give the filmmakers fair credit, they do provide a resolution that neatly balances the thoroughly predictable and the genuinely surprising. And the young actors in central roles — especially Ludwig and Melton — are well cast and credible. On the other hand, “Heart of Champions” clocks in at 120 minutes, a long slog during which the passage of time and the accumulation of clichés are constantly felt.