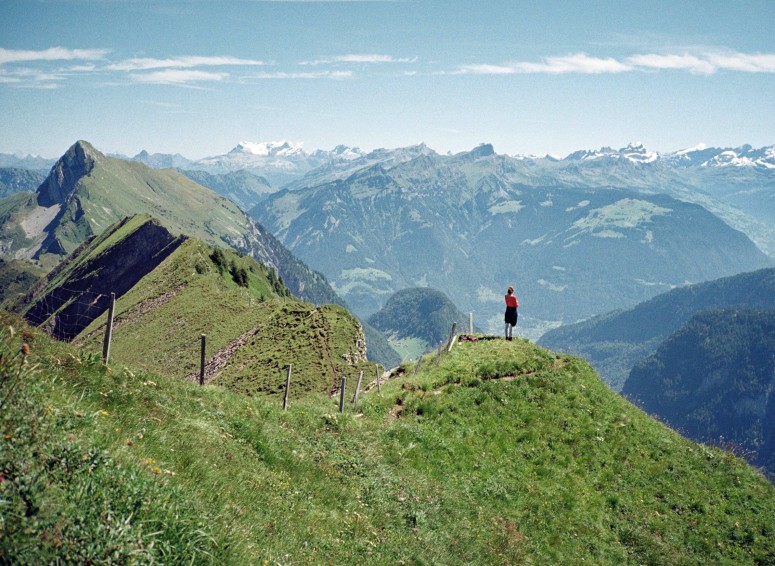 To follow-up his 2016 debut “Marija,” Swiss filmmaker Michael Koch set his sight skyward, fixing his vision on a remote Alpine farming community both untouched and victim to time. The filmmaker immersed himself in that world, working with village locals, collecting stories and living off the land, and would then channel those experiences into his sophomore feature.

Now premiering in competition in Berlin, “A Piece of Sky” follows a taciturn farmhand, Marco (Simon Wisler), and a single mother, Anna (Michèle Brand), who find strength in each other as they build a life in the punishing Alpine range. But when Marco falls ill with a brain tumor everything changes, up and to including the way he interacts with the world. Far from an illness-melodrama, “A Piece of Sky” instead offers a measured study of change, comparing the seasonal cycles – where warm days may vanish with the promise to return – with the more unidirectional trajectory of physical decline.

What are the roots of this project?
Years ago I heard a story about a young woman in an Alpine village whose husband changed dramatically due to a tumor and later died. I was very struck by the story and decided to meet the young woman in her remote mountain village. Around the same time, my cousin, who was the same age as me, passed away due to a tumor. I started to think about this topic a lot and during this process I came across three different stories of people who all lost their partners to illness at a young age. I collected these different materials and worked them into a script.

Beyond the personal stories, you also wanted to evoke tones and rhythms of mountain life. How would you describe them?
The experience of time has a completely different dimension there. Life in the mountains is like a cycle. The seasons play an important role in determining when and how work is done. And the silence of the mountain world is so unique it shapes the local people accordingly. I had the feeling this was often expressed through a certain calmness and restraint in their behavior towards each other, but also towards me. It was in this tone that I wanted to tell the story.

The film uses all non-professional actors – for the most part natives of this region. What made that important?
I was still looking for people in whose bodies and faces the experience of living in the mountains is already inscribed. Life up there is characterized by hard, physical work. I wanted to capture that as authentically as possible. I staged the non-professionals differently from the way I do it with actors. I always told them to do less. I wanted them to be as pure as possible, without “acting,” so that in the end something truthful would be transferred onto the screen.

There’s also a sort of natural truth, as you tried to incorporate as many elements and naturally occurring phenomena into the film.

The film is strongly rooted in documentary, but my attempt was to combine this documentary approach with a formal design. This kind of friction interests me. That means we had to be very flexible and react to the circumstances. We were a small team of only a dozen people on the set, but we shot for a very long time – 70 days – so we could often wait for things to happen. It was a luxurious situation.

You’ve worked on this project for almost four years now. How did the work affect you?

The many relationships that have been built up over the years and the intensive collaboration with the people in the mountains are what make the project very special for me. I think the people in the mountains have taught me to stay calm, to take things step by step, and how to accept things that are beyond our control without losing your confidence and inner conviction.

What’s next for Michael Koch?

My fascination and attachment to the film’s world is so strong that I guess it will also appear in my next film as well.