Despite Competing Against Unsigned Talent, Michael Bolton Is an Underdog in This Week’s ‘American Song Contest’ 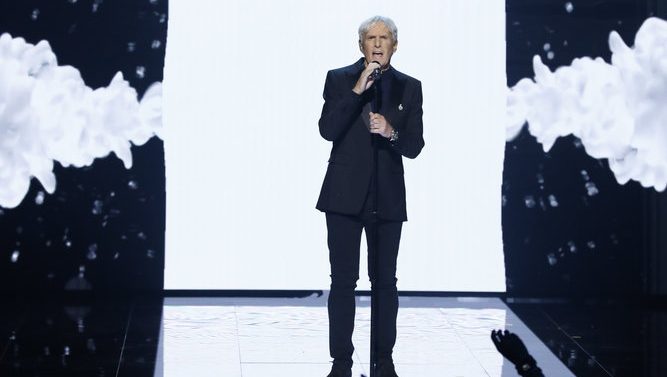 How are we supposed to live without Michael Bolton? “American Song Contest” doesn’t have to answer that question just yet, as Connecticut-based Bolton and his song “Beautiful World” could still place next week through a combination of votes through fans and jurors.

But the early lead on night one of NBC’s U.S. take on the Eurovision Song Contest went to Rhode Island’s Hueston, wearing his heart on his sleeve with the tear-jerker “Held on Too Long.” Hueston most impressed the 56-member juror panel — which includes iHeartMedia chief programming officer/president Tom Poleman, KLOS host and former MTV VJ Matt Pinfield and artist/songwriter/producer Ester Dean. He was the first from this group to qualify to move on from this round.

Hueston, who described himself as a cross between Adele and Chris Stapleton, told reporters that his songwriting comes from difficult experiences, a well of emotions he is exploring separate from his independent group, The Blancos. Competing against Bolton, whom he described as a “sweetheart,” was a “full-circle” moment.

“I grew up listening to his music,” Hueston said. “My mom played every record of his as a kid. It’s like this weird, full-circle spiritual thing that is going on,” he said. “Michael Bolton may be responsible for my music career because subconsciously I have heard him belting and singing his ass off for years, and then I happen to perform on the same episode as him, which is pretty crazy.”

Bolton — who told the press his simple decision to compete on the show is because “I’m a songwriter” — is still not out of the running, because voting will follow a point system in which every state and territory votes with equal power, regardless of population. Viewers are able to vote for their favorite performances on nbc.com/ascvote, the NBC App and on TikTok, the official voting platform partner for “American Song Contest.” Three more songs will be chosen and revealed next week.

Bolton isn’t the only established professional in the competition. Jewel will be on hand for Alaska, SisQó is on deck for Maryland and Macy Gray will be the face of Ohio. Does the mere mention of these established artists make the up and comers nervous?

“I am my own contestant,” said Wisconsin’s “nuvo retro” Jake’O. “It didn’t get in my head. The only thing that gets in my head is myself. I feel like a lot of time leading up to this competition was a lot of time for reflection, and I was trying to kill the ego as much as possible, and what I mean by ego I mean my voices of doubt.”

Mississippi’s Keyone Starr already had some success singing on a Mark Ronson album and performing at festivals such as Glastonbury. Now, “American Song Contest” is giving her a chance to stretch as songwriter as well, and she was delighted to see hosts Snoop Dogg and Clarkson enjoying her song, “Fire,” with Snoop even singing a bit of it before a commercial break.

“O-M-G it felt phenomenal, I wanted him to sing it again,” she laughed, still blown away by his “stamp of approval.”

Starr is hopeful that she will advance to the semifinals, and already is eager to record a full album of her own material.

“My goal is to put together a full compilation, because I have written songs for these artists as well as had singles, and I think this is the perfect time and opportunity since now [the audience] is properly introduced to my song,” she said.

“It’s really wild. Being on a show like this is the biggest thing I have every done in my music career,” she said. “I couldn’t buy this type of opportunity and platform to put my music on.”

Snoop also sang along to UG Skywalkin’s “Love in My City,” which the performer didn’t notice until he took a seat.

“When I was walking off the stage, I didn’t get to hear him do that,” UG Skywalkin said. “It’s a blessing. It’s amazing. I wish I would have heard that.”

AleXa also felt the Snoop love when the rapper declared K-Pop his “guilty pleasure.” (“Snoop Dogg acknowledged the genre that I do,” she exclaimed.) And Wyoming’s Ryan Charles was shocked to hear his attempt to make his country-rap song, “New Boot Goofin,’” into a new Tik Tok trend.

What exactly is “New Boot Goofin’?” “It’s about that self confidence you get with a new pair of boots and just enjoying yourself,” he said.

Pink-haired multi-instrumentalist Alisabeth Von Presley (Iowa) performed her song “Wonder” with a keytar, and revealed to reporters that the guitar in her video package was an homage to the late Eddie Van Halen.

“I love to paint my guitars with Eddie Van Halen stripes,” she said. “That is what I listen to before I go onstage, a ripping guitar solo gets me in the mood to kick some butt.”

“It was really nerve wracking. We were told a couple of days before and we were very nervous, but very excited to get it done and start the showoff right,” said Lars Pruitt.

Band mate Jacob Felstow added that being the opening band was “definitely intimidating because everybody was so talented. Every artist. But we have been an opening band on shows before and we just channel that same energy that we are just going to start the show off, high energy and give it everything you got, and that’s all you can do.”

“American Song Contest” will run for eight weeks on NBC, with the semifinals on April 25 and the finale on May 9.