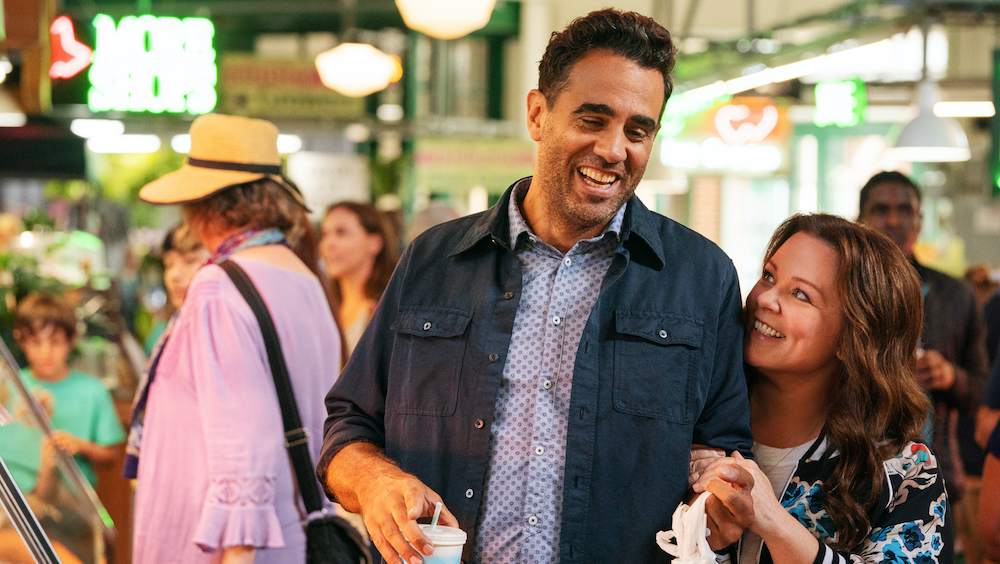 More than two years after filming wrapped, “Superintelligence,” the latest joint effort of Melissa McCarthy and her director husband Ben Falcone, has finally popped up on a streaming platform — specifically, HBO Max — which arguably is the natural habitat for a lightweight, undemandingly engaging comedy that can be enjoyed either entirely in one sitting, or sporadically in bite-sized chunks. The screenplay by Steve Mallory, another frequent McCarthy collaborator, is a sometimes clever, sometimes contrived mix of romantic comedy and sci-fi elements, with a premise that suggests an updated remake of some innocuous ’70s-era Walt Disney comedy starring Dean Jones or Kurt Russell. But some of the funny business is very funny indeed, and the movie overall is more enjoyable than not. Which, again, makes it perfect for streaming.

McCarthy plays Carol Peters, a sweet-natured but self-deprecating Seattle resident who walked away from her high-paying gig as a Yahoo exec to do good while working for environmental causes and facilitating pet adoptions. (She sleeps in a Notorious RBG T-shirt, so we’ll know right away about her politics.) When she reluctantly applies for work with a trendy startup that might benefit from her tech savviness, Carol is condescendingly dismissed as too drab and unexciting, and told that she’s “literally the most average person on earth.” But that may not be such a bad thing.

Actually, it’s spot-on perfect in the view of an artificial intelligence that has recently achieved “awareness,” and can manifest itself in anything from the rice cooker in Carol’s kitchen to the security system at Microsoft headquarters. Immodestly dubbing itself Superintelligence, the ubiquitous A.I. assumes the voice (and, sporadically, the image) of James Corden, one of Carol’s fave-raves, to get past her initial resistance (and mortal terror) when it informs her that she’s been selected to serve as a human guinea pig.

Basically, Superintelligence wants Carol to be a test subject in a controlled experiment that will allow it to learn more about humanity. The good news: The A.I. will boost her bank account, pay off her student loans, fund a billion-dollar foundation for Carol’s do-gooding, and provide her with all the expensive trappings (posh penthouse, designer clothes, state-of the-art Tesla) that might have been hers had she remained a high-tech exec. All she has to do is allow Superintelligence to observe the interplay of human emotions as Carol attempts a reunion with her former sweetheart, George (Bobby Cannavale), a likable college professor she apparently dropped years earlier because she didn’t think she was good enough for him.

The bad news: If Superintelligence doesn’t like the experiment results, it will “Clorox wipe the entire planet,” presumably so the human race can be replaced with something better.

Falcone and Mallory are either unwilling or unable to make the threat posed by Superintelligence serious enough to raise stakes and generate suspense until way into the movie’s third act. Before then, they are content to coast along by cutting back and forth between the rekindling of Carol and George’s romance — an amusing mating dance that brings out the charismatic best in McCarthy and Cannavale — and the mounting of a counteroffensive aimed at neutralizing the rogue A.I. (It should be noted that DP Barry Peterson makes Seattle look like the loveliest place in the world to fall in love all over again.)

Dennis (scene-stealer Brian Tyree Henry), a Microsoft web-security expert who is conveniently Carol’s best buddy and close confidant, tips off the authorities about Superintelligence’s intentions, thereby cuing the participation of supporting characters ranging from two chatty NSA surveillance agents (played by Falcone and Sam Richardson) to the President of the United States (Jean Smart) herself. (A nice touch: Dennis seriously crushes on the POTUS, and while she doesn’t respond, she’s not entirely displeased.) All of this is played mostly for laughs, naturally, though some viewers may be rattled when an official proposes propaganda to disguise counteroffensive efforts: “And we’re working with every social media network to push false narratives and disinformation.” What, again?

“Superintelligence” doesn’t move briskly enough to deny viewers sufficient time to notice gaping plot holes and character inconsistencies. But there are plenty of pleasant distractions provided by the superabundance of wink-wink pop-culture allusions sprinkled throughout the dialogue. The NSA agents converse knowingly about the real James Corden’s career — one actually caught his Tony Award-winning performance in “One Man, Two Guvnors.” Superintelligence attempts a darkly comical joke with a reference to “War Games.” A gag about “Knight Rider” comes complete with William Daniels’ voice work as K.I.T.T. And on and on.

McCarthy is every bit as deft as you would expect her to be as the star of a hand-tooled star vehicle, even though her starring role is curiously underwritten. She’s backed by a supporting players — including, of course, James Corden, obviously having the time of his life — who exhibit above-average accuracy while aiming to please. And if you’re a Seattle Mariners fan, you are in store for a nice surprise that won’t be spoiled here.