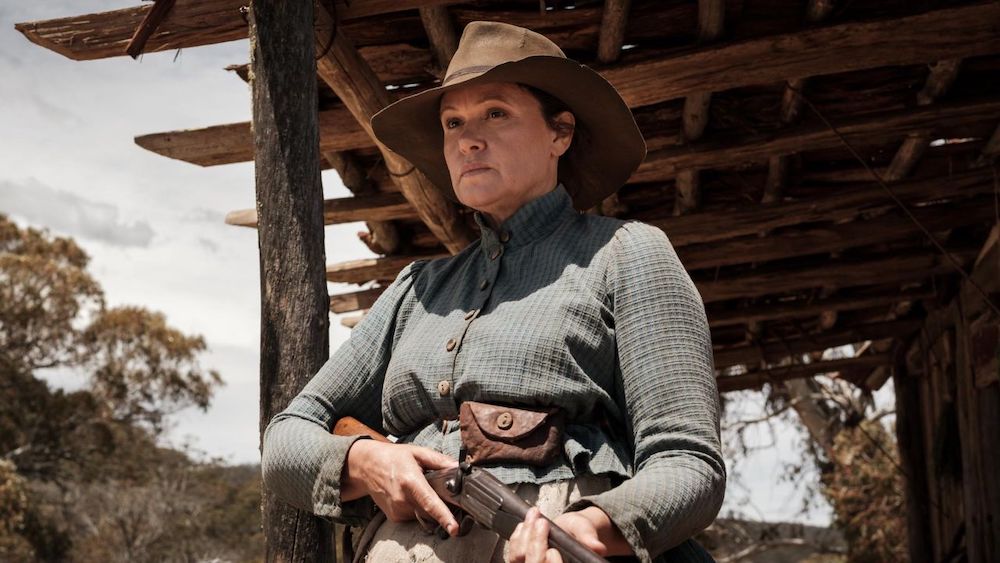 No one is more devoted to Australian author Henry Lawson’s “The Drover’s Wife” than Leah Purcell. First, she adapted Lawson’s classic 1892 short story as an award-winning play at Sydney’s Belvoir St Theatre, in which she starred; then she turned it into an acclaimed novel; and now, she has written and directed a gripping film in which she stirringly portrays Molly Johnson, as Purcell colorfully christened the tale’s nameless title character. Roles like this are rare enough in cinema, and Purcell knows it, giving herself a smashmouth first-act scene in which she brandishes a shotgun and warns an unwelcome visitor, “I’ll shoot you where you stand, and I’ll bury you where you fall.”

Purcell delivers the line with such assurance and authority that, had John Wayne or Charles Bronson been on the receiving end of that threat, they likely would have changed their minds and raised their hands. Never mind that Molly is extremely pregnant, unprotected by her absent husband — a drover who’s too far away from their homestead for months at a time — and fending for herself at their isolated shanty in the Snowy Mountains region of New South Wales. Right from the start of “The Drover’s Wife: The Legend of Molly Johnson,” an exceptionally compelling Outback Western, there is little doubt that it will take more than a sudden appearance of an escaped Aboriginal convict (and possible mass murderer) to shake her resolve or break her spirit.

Unfortunately, this formidable frontierswoman must indeed deal with more — a lot more, actually — during the course of Purcell’s perceptively detailed and punishingly harsh tragedy about lives shaped, stunted or destroyed by the sexual and racial politics and presumptions endemic to British colonial Australia. As a filmmaker, Purcell is brutally specific while defining her 19th-century world and expressing her concerns. At the same time, however, she repeatedly emphasizes — sometimes too insistently, but more often eloquently — the enduring wisdom of William Faulkner’s much-quoted observation that the past is never dead, it’s not even past.

Long before the fugitive Yadaka (Rob Collins) shows up near her doorstep with a metal shackle around his neck and a plaintive tone to his voice, Molly demonstrates her independence by shooting a wild bullock that wanders onto her land, then carving up the carcass to feed herself and her four children. After some initial reluctance fueled by vigilance, she offers places at her table for two travelers: Sgt. Nate Klintoff (Sam Reid), who’s been assigned to enforce British law in the nearby rough-and-ready Everton Outpost, and his London-bred wife, Louisa (Jessica De Gouw), an aspiring writer and proto-feminist who intends to start a newsletter proselytizing for the rights of battered women, among other things.

The Klintoffs are basically decent, well-meaning people — which Molly obviously recognizes when she accepts their offer to temporarily resettle her children in Everton — and the film grants them, in different ways, opportunities to reveal moral and physical strengths. (Note how Louisa survives influenza seemingly by wiling herself to do so.) But they are strangers in a strange land, and they remain ineffectual observers at best, upholders of the status quo at worst, as “The Drover’s Wife” proceeds along a narrative track that feels as unforgiving as that of a 1940s film noir.

While the children are away from the remote homestead, Yadaka and Molly gradually — and, on her part, begrudgingly — forge a wary friendship based on their shared memories of abuse and marginalization. You might wince at the stab toward contemporary relevance when Yadaka speaks of being persecuted for “existing whilst Black,” but Collins is sufficiently excellent as an actor to sell the line anyway.

Ttheir relationship forces Molly to confront inconvenient truths about her past — things she claims she never knew, and never wanted to know — and places both of them in danger while Yadaka is pursued by bounty hunters and the local police. Sgt. Klintoff thinks he is doing Molly a service when he assigns a young constable (Benedict Hardie) to check on her while an accused murderer is at large in the area. Nothing good comes of this.

Purcell, an Indigenous Australian multi-hyphenate with a screen presence that suggests a force of nature, brusquely immerses us in a colonial era culture where white females outside of the ruling class are treated with scarcely more deference than Aboriginal males, and where even a hint of a mixed-race ancestry can condemn men, women and children to second-class status, or worse. An unashamedly racist local official sadly notes that certain youngsters are to be pitied for their parentage: “Just a touch of the tar brush — but enough.”

Even a relatively enlightened upholder of the crown’s law such as Sgt. Klintoff demands rough justice for Aboriginal criminals and battered wives of any color: “This land needs law, not a moral compass.” His wife Louisa is far more sympathetic, something the movie visualizes with unfortunate heavy-handedness in a late scene that probably worked better on stage. But while Molly appreciates the support of her sole champion, she astutely accuses Louise of writing from the viewpoint of a privileged outsider.

Much credit must go to DP Mark Wareham, who skillfully accentuates the dichotomy of natural beauty and savage violence, and who enables Purcell to enhance her narrative with such effective visual shorthand as the image of a barefoot Molly that echoes Yadaka’s earlier stories about life on the run, and a final sequence that gracefully recalls the embracive ending of Robert Benton’s “Places in the Heart.”

Supporting performances are impressive across the board. But special mention much be made of Benedict Hardie’s scrupulously non-heroic portrayal of Constable Leslie, one of the film’s precious few sources of comic relief. The next time you hear someone complain that this or that actor in a Western didn’t appear at ease in the saddle, point them to Hardie’s illustration here that, back in the day, there doubtless were lots of people who really, really weren’t comfortable on horseback.