Jack White on His New Twin Albums, Spurring the Modern Vinyl Revolution and That Onstage Wedding

Jack White has always been a bifurcated kind of guy. That was evident right from the name of his very famous first band: Announcing you’re a stripe may be one strong indicator of a two-tone sensibility. His yin and yang are there not just in a serious design ethos — which could be red, yellow or blue set against solid black or white, depending on the era — but in his musical extremes, which range from “We’re Going to Be Friends”-style finger-picking and folky gentility to the million-watt rock exorcisms of a “Get Behind Me Satan.” Consider his Michigan and Tennessee hometowns, even, where he maintains twin business bases: He’s still part Detroit punk, part Southern gentleman.

To be sure, White has always favored a myriad of styles. “I love eclectic left turns,” he says, professing that the multifaceted White Album is his favorite Beatles collection. “It was the first album on vinyl I bought as a teenager. And even in the White Stripes, when there were only two people” in the lineup, “our records would take a left turn into some ragtime ’20s thing and then go back into some heavy blues thing and then come out with this ’70s-punk-sounding vibe the next song.”

Still, when he was working toward putting out what was supposed to be a single release in 2022, it was too split-personality even for his variegated tastes. “No matter how much I tried to make a sequence out of the songs, it just seemed like you were taking a Miles Davis record and putting it in the middle of an Iron Maiden record. It had an ‘Oh, that’s interestingly jarring thing’ to it,” he explains, “but it wasn’t breathing or flowing.”

The solution: two completely distinct albums, released in quick succession, in the kind of twofer gambit that hasn’t been done much since the days when Bruce Springsteen or Guns N’ Roses would experimentally drop a pair of records simultaneously. “Fear of the Dawn,” which came out April 8, is the “electric” album of the two, a record full of deeply heavy riffs but also constant sonic experimentation that comes on like a 49-nation army. Arriving July 22 as its not-so-evil twin is “Entering Heaven Alive,” an album of mostly acoustic love songs — which White insists is only coincidental to his recent nuptials, since he swears he’s no confessional songwriter.

After his Solomonic splitting of the albums, he’d been planning to at least release them the same day, as Bruce and Axl had many years before him. The thing that really convinced him otherwise was (can this come as any surprise, if you know Jack White?) vinyl supply-chain issues. “This was our compromise: Let’s put three months between the albums. And the pressing plant immediately said, ‘Oh, thank God.’”

That would be White’s own pressing plant, Third Man in Detroit — the only such facility owned by a musician, and still just one of all too few in the nation, even as White publicly urges the major labels to start building their own to enable the current vinyl boom, which can be traced right back to the White Stripes’ LP boomlet 20-25 years ago. He admits it can be a little tricky when every other artist in the world wants to use your plant and you’re suddenly churning out enough new product that you need to cut in your own line.

“Entering Heaven Alive” recalls nothing so much as a beautiful 1970s singer-songwriter record, albeit with some excursions into string-band sounds, jazzy piano solos and classic shuffles. It’s easily digestible for just about any ear, which stands it in contrast to his “electric” records of late. On 2018’s “Boarding House Reach,” White got notably gonzo in some of the tracks, delighting some fans and putting off others. This spring’s “Fear of the Dawn” had that same sense of the experimental but has been more universally beloved, maybe because it embeds what feels like a hundred of those “Seven Nation Army”-style riffs within its eclecticism.

“As a guitar player, ‘Fear of the Dawn’ is my proudest guitar playing I’ve ever done. And I think it bridges a gap between simplicity and the complex,” he says. But some of the parts you think are guitars aren’t.

“Something that I hope the new generation of teenagers embraces,” White says, “is caring and being curious about what is making the sound on the records they love. It’s a little bit like how, once CGI became a thing in movies, we just stopped caring about how a special effect was made. It just became, ‘Oh, it’s computers.’ And I think a lot of music is that way too. You could be loving a hip-hop track on Kendrick Lamar’s new album, and some interesting instrument is playing in the background, and most people don’t care if it’s a clarinet or a violin or a synthesizer — they just say ‘I love that sound.’ That’s all well and good, but I think there’s more beauty to be found, and you can be more inspired, if you’re curious about: Well, what made that actual sound?

“As my kids were growing up, I loved to watch cartoons and guess what made the cartoon sounds. My favorites are the older ones, you know, ‘The Jetsons’ and Bugs Bunny, because you knew they were using real instruments and objects, and foley guys were back there trying to figure out how to make the sound of Wile E. Coyote blowing up or something shooting into a glass building. So I always get some inspiration from that — say, on the ‘Fear of the Dawn’ record, trying to figure out synthesizers that sound like guitars and guitars that sound like synthesizers. I’m not known as a synth player, but I forced myself to get involved in instruments that I don’t know much about and see if I can come up with something interesting and inspiring for myself, and maybe other people with it. A couple of times it worked, and it’s great when it does.

“Because I’ve got the curse of being from a well-known band, and the well-known band that I was from was based around doing things very simply.” He recalls a moment in time in the White Stripes, the band he had with drummer (and ex-wife) Meg White from 1997-2011. “I remember when we mixed ‘Elephant’ [in 2003] — we mixed 18 songs in one day, for the final mix of the album and the B-sides,” White remembers, chuckling, appreciating the memory of all that speed and simplicity and feeling no need to replicate that in the present day.

“When you get people who enjoy that, and then they want more of that, it’s like being Robert Plant making a solo record. People in the back of their heads are saying, ‘Wow, how come this doesn’t sound like Led Zeppelin?’ I will get some of that, too — or ‘You need Meg to reel you in.’ No, I’m good. Thanks. Sorry. I don’t need Meg to reel me in! Why would I want to make my new solo album sound anything like the band I was in? It would be like trying to live in this nostalgia scenario.” 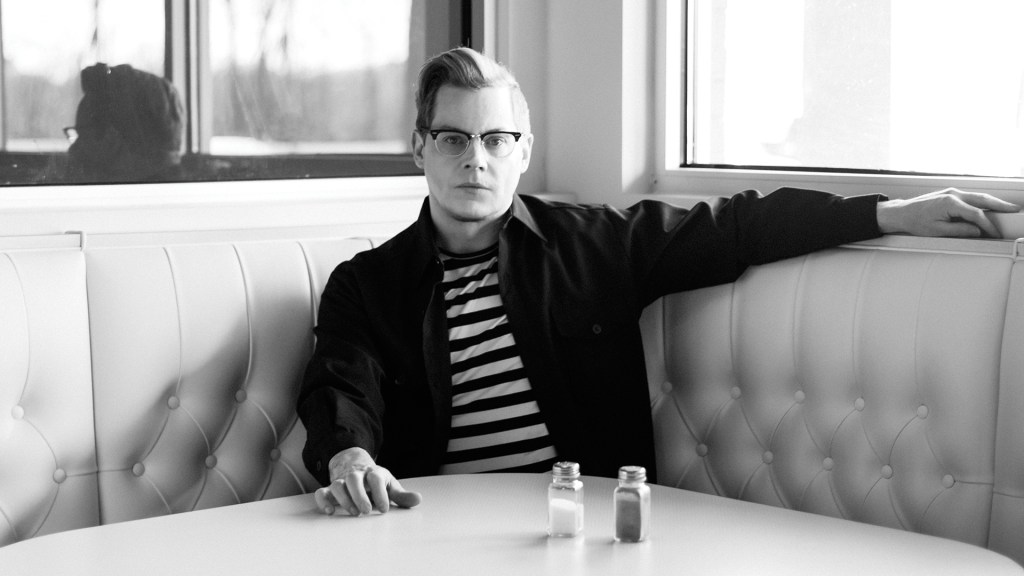 White has been thought of, somewhat reasonably, as the last of the great American rock stars. He just hooked up, in a manner of speaking, with the first of those, Elvis Presley, for the “Elvis” soundtrack. It’s no great secret that he has a Presley fetish to go with his other dozens — probably hundreds — of midcentury loves: In 2015, he ‘fessed up to being the winning bidder when Elvis’ first acetate recording, a 1953 demo disc of “My Happiness” and “That’s When Your Heartaches Begin,” sold at auction for $300,000. (White subsequently lent the precious Presley acetate to a museum for display and released a replica on his own Third Man label.)

With the “Elvis” soundtrack, the means by which his participation happened somewhat belies his image as a control freak. He and director Baz Luhrmann had “chatted about different things, but then, because he had heard my cover of ‘Power of My Love,’ he had this idea of it being a duet, with my voice and Elvis’ put inside of it. My mind popped back to that Natalie Cole and Nat King Cole album, where they did those sort of from-the grave duets, or whatever is a polite way to put it,” he laughs. “I always loved that record. So I gave them the original tracks of my recording and said, ‘Remix it and make it into something new.’ I’m glad somebody else did it. I didn’t want to handle messing up Elvis’ voice with my own. That’s too scary; I would just end up burying my own voice, out of respect.”

Even though he doesn’t mind dueting across time and space, White is usually very much about the corporeal. His “let’s get physical” inclinations came to a head early in the pandemic. “When 2020 started, I had changed so much stuff about myself,” he says. “I had stopped eating sugar and carbohydrates, and begun getting into long-term fasting and intermittent fasting. I was on a whole new regimen of daily health. And then as February hit and March came and we started to really see ‘Nobody’s gonna be touring, and it might not happen for another year or two,’ that’s when I started to get very disinterested in writing.”

Which didn’t mean laziness. His interests just turned back toward furniture, or sculpture, or starting a website, Jack White Art & Design, devoted to the visual and/or physical work that happens outside of (or augments) his music. As fans know, before he was a guitar hero, he was an upholstery hero.

“It’s crazy to be 21 and have your own business,” he now sees, looking back on the upholstery business he ran in Detroit. “It was a job, to most people, but to me, it was trying to figure out how to make it artistically creative. And I took it to a spot where it was wildly artistic, and maybe even unappealing to the customers,” he admits. Eventually the White Stripes took off way more than the button-tufting was every going to. But you can hear his enduring love for these things in a couple of telling lines in one of the new “Entering Heaven Alive” songs, “Love is Selfish,” in which he equates physical work with romance itself: “Someone smarter than me and you might end up solving a clue or two, but could they make it happen with their hands? Could they build it up from nothing with their hands?”

White relates to Bob Dylan’s love of doing iron works sculptures as well as painting on the side. “I think (Dylan) comes from a place like I do, where there’s sort of these Midwestern, blue-collar environments where most of the people around you do something. They’re a carpenter or they’re an iron worker, and it’s not uncommon to be surrounded by people who are creative through more of a mechanical process, or a just paying-the-bills kind of process. That’s what I was with upholstery. … There’s guys out there who can build a car from scratch, who have no idea how to take a photo of it and present it and sell it to other people. And their talent is hidden and their love and their passion is hidden because o