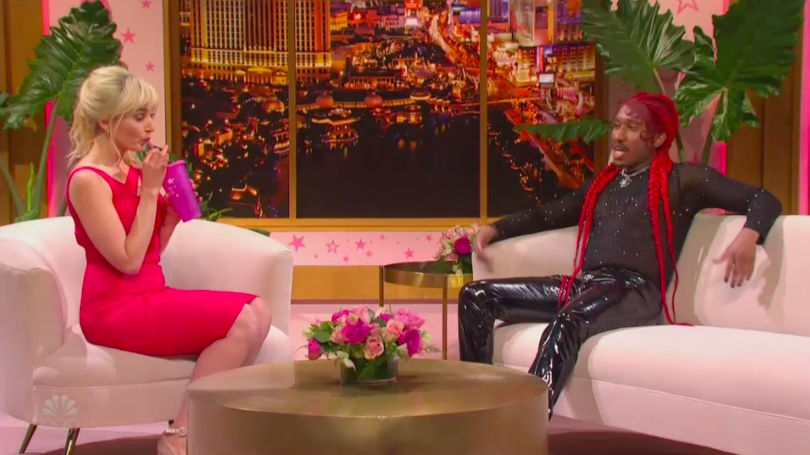 Sometimes there is just so much news of which “Saturday Night Live” wants to make fun the NBC late-night sketch show needs to cram a lot of commentary into one sketch. Thankfully, earlier in Season 46 they found a way to do so — with “Oops You Did It Again,” a fictional talk show hosted by Britney Spears (played by Chloe Fineman) that examines the week’s “pariahs” to determine if they’re “not that innocent.” And on the April 3 show they brought it back with to weigh in on Lil Nas X, Pepé Le Pew and Rep. Matt Gaetz.

Chris Redd portrayed the musician, who Fineman’s Spears noted drew criticism from both the Catholic church and Nike this week after the debut of his “Montero (Call Me By Your Name”) music video and shoe collaboration that contains human blood.

Redd’s Lil Nas X confirmed there really is a drop of blood in each pair of shoes but said, “I really don’t know why Nike’s so mad. Their whole thing is, ‘Just do it.’ Well, I did it.”

Speaking about the music video, Fineman’s Spears pointed out that people have complained that, in it, he rides a stripper pole to hell and then twerks on the devil. “People are close-minded idiots,” he replied. “People are afraid of me because I’m different, but really I’m just your typical gay, Black, country, rap sneaker entrepreneur. I put my pants on like everyone else: one ass-less chap at a time.”

He also addressed those who are mad that he gave Satan a lap dance by saying, “You know that wasn’t the real Satan, right?” And when Fineman’s Spears asked if he would be willing to give God a lap dance — to “even things out” — he agreed. Mikey Day as God then joined them on set.

Responding to claims the character promotes a “culture of assault,” McKinnon’s Le Pew said, “I’m an actor. The part you see me play on TV and in the movies, that’s not me. I would love to be at a point in my career where I could turn down projects, but there’s not a lot of parts for an old French skunk. The parts come down to me and Gérard Depardieu, and if you think I am the problem, I have two words for you: Speedy Gonzales and you didn’t hear this from me but the FBI is 99% sure Yosemite Sam was at the Capitol riots.”

The final guest, for whom Fineman’s Spears said to “keep your hands apart, not clapping” was “sex pest” Gaetz, played by Pete Davidson. “Who are you again?” she asked, before saying his story is “so incredibly Florida” and “bizarre” she needed to get things clarified. “You were dating a 17-year-old and brought her on trips along state lines? Prostitutes said you took ecstasy and had sex with them in Florida hotel rooms? And your Republican colleagues in Congress say you showed them nude photos of women you were sleeping with?”

“I don’t know, Matt, I think I can spot a teen predator when I see one. After all, I was on ‘Mickey Mouse Club,’” she continued.

Davidson’s Gaetz said that people “are just targeting me because I supported Donald Trump.” But, “weirdly, in my district [these allegations] might help.”

He tried to say he was “just a ladies man,” like Le Pew, to which McKinnon’s Le Pew said, “Dude, no. I’m a cartoon skunk, you are a United States congressman. Be better.”

Davidson’s Gaetz offered to try a lap dance, but Redd’s Lil Nas X shut him down by reminding him he had friends in both the hip-hop and country music communities, “the two populations that are guaranteed to own guns.”

Spears herself was in the hot seat, though, as well, after being accused of not writing her own social media posts.

But in the end, Fineman’s Spears had clear-cut verdicts for all of her guests: Lil Nas X was innocent, Le Pew was “not that innocent” and, while she couldn’t legally call Gaetz innocent or guilty, she encouraged everyone to “judge him by his face.”

Watch a clip from the April 3 cold open below.

please welcome @LilNasX to Oops, You Did It Again pic.twitter.com/Ogz74KYlbK

Beck Bennett played the businessman who was accused of soliciting prostitutes earlier this week, receiving laughs when he walked out, while Chris Redd played the actor and musician, which elicited audible surprise and concern from the audience when they realized the show would be taking on the headline-grabbing story about Smollett being attacked in Chicago in what appeared to be a hate crime but is now being investigated as a set up.

Both men appeared in front of the panel of sharks for help. This panel consisted of Pete Davidson as Michael Avenatti, Cecily Strong as Jeanine Pirro, Kate McKinnon as “the man, the myth, the leper” Rudy Giuliani, and episode host John Mulaney as the “scourge of Martha’s Vineyard,” Alan Dershowitz.

“After I started defending Trump, no one invited me to parties anymore,” Mulaney as Dershowitz said. “I wish I could go back to defending good people, like O.J.”

“Sharks, I am currently in some hot water over an accusation I went to a day spa in Florida and got what turned out to be a not-so happy ending,” Bennett as Kraft said. I’m also the only person to ever take a private jet straight to a $59 hand job. I am seeking an attorney who will make sure no one sees the video of my 77-year-old pigskin getting tossed around.”

While Davidson as Avenatti made “beat it” jokes, Strong as Pirro commented on the “real criminal” being the “immigrant woman that stole that job from a soft, white, American hand.” Meanwhile, McKinnon as Giuliani made a plea to be selected as the counsel, saying he would “happily go on TV, contradict everything you’ve ever said and then add some additional damaging information free of charge.”

When it came time for Redd as Smollett to address the panel, he said, “Hey everyone you won’t believe this, but I was just attacked outside the studio by Donald Trump himself.”

When he was asked if it was true, he asked if there were cameras outside, and upon hearing that there were, he rescinded his statement. When asked why he was here, he said, “I broke humanity? But if you take my case, I am offering spoilers for the next season of ‘Empire.’ I die.”

Strong as Pirro said she “wrote Fox News fan fiction” about “a gay, black man lying about being attacked” — but she admitted she never thought it would come true. She recused herself because she was “just too turned on.”

Mulaney as Dershowitz told Redd as Smollett that he had everything he wanted in a client; he was “famous and probably guilty.” On the other hand, though, the Cellino and Barnes jingle was reworded to say even they “won’t touch this.”