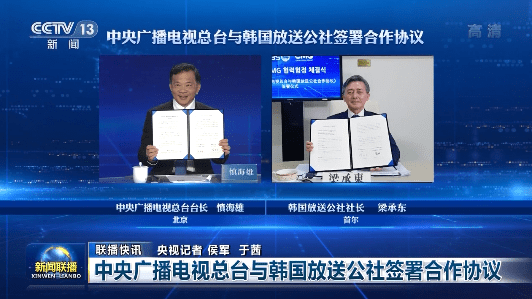 China’s state broadcaster China Central Television (CCTV) announced late Monday evening that it has signed a strategic partnership in program development and online video with South Korean public broadcaster KBS. The move may be a strong indication of a thaw in tensions between the two countries that have for years left Korean content unofficially banned in the mainland.

If so, it would be a boon to Korean content creators and firms, shut out of the China market since 2016 in retaliation for Korea’s agreement to allow the deployment of the U.S. anti-missile defense system THAAD, a move that sorely angered Beijing.

“This year is the year of Sino-Korean cultural exchange,” said CCTV, which echoes the party line of the ruling Communist Party, in its brief announcement of the deal. CCTV and KBS “signed a video-type cooperation agreement… in order to implement the consensus reached by the heads of state of China and South Korea,” it explained, without providing further details as to what sort of cooperation would occur when.

Korean-language reports have not elaborated either. The deal will see the two firms “cooperate in various aspects of the cultural industry by using the strengths of both in online video,” according to one report.

The two sides “decided, based on the principles of equality, mutual benefit and friendly consultations, to establish a cooperation mechanism for program content development, media technology, industrial management, and other such areas,” said CCTV. It added that the move seeks to “promote people-to-people exchange between the two countries, enhancing friendship and mutual trust so as to push the China-South Korea strategic partnership to new heights.”

The agreement was signed by China’s Shen Haixiong — the current head of China Media Group, which oversees CCTV, and deputy minister in the country’s powerful central propaganda bureau — and KBS president Yang Seung-dong.

Since the building of THAAD, no Korean film has been granted an official theatrical release in China, and no major Korean music group has been invited to perform. There has been some thaw in the top-down order to keep content out, however. Some prominent K-pop artists such as Big Bang’s G-Dragon and Blackpink’s Lisa, who is Thai, landed big endorsement deals and even variety show appearances in China.

Yet even after those deals, Korean industry watchers despaired as recently as last May over the possibility of a reconciliation. “There are signs of optimism compared with four years ago when K-pop stars were removed from advertisements. But it’s too early to interpret it as anything more than what it actually is,” Lim Dae-geun, a professor of Chinese interpretation at Hankuk University of Foreign Studies, told the Korean Herald at the time.

Things may have now shifted, however.

The CCTV-KBS deal appears to emerge out of a state visit paid by Chinese foreign minister Wang Yi to South Korea in late November, during which he sought to reel the country in closer as an ally before the arrival of the new U.S. Biden administration.

The two countries agreed then to engage in greater cultural exchange in 2021 and 2022, ahead of the Beijing Winter Olympics and the 30th anniversary of their establishment of diplomatic ties.

“The U.S. is not the only country in this world,” Wang said when asked at a press conference about his trip in context of U.S.-China rivalries, describing China and Korea as being “like relatives.”