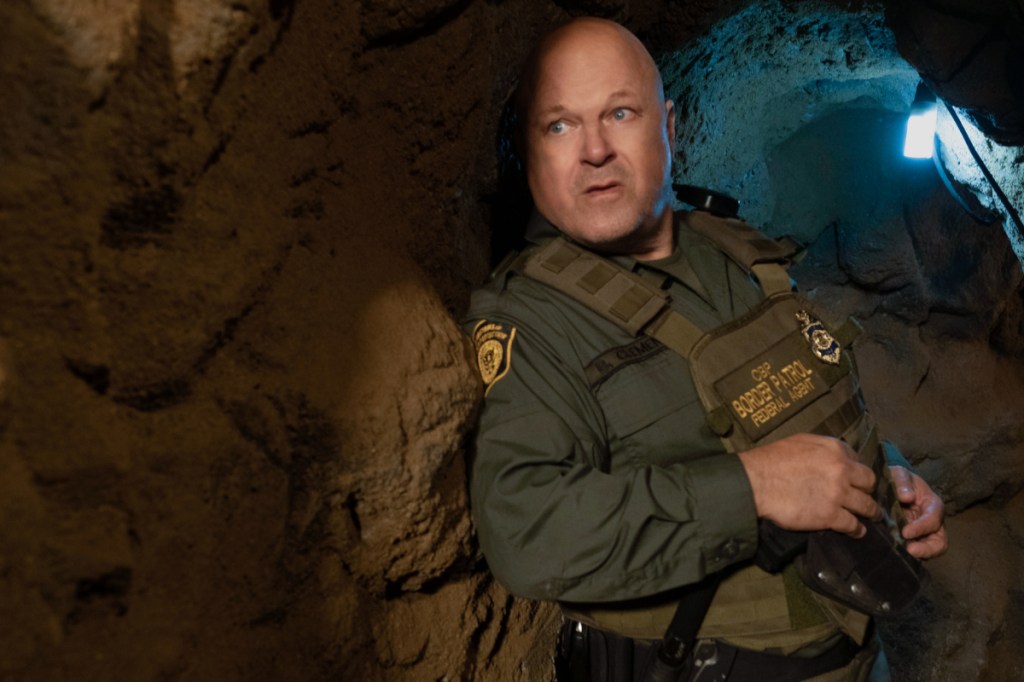 Throughout the first episode of “Coyote,” I kept waiting for a moment that might surprise me. Surely, I thought, this swashbuckling tale of a recently retired Border Patrol agent (Michael Chiklis) has more to offer than bursts of violence and basic platitudes about right and wrong. Surely, I hoped, there might be different layers to this series than meets the eye. And yet by the end of four episodes, no such moment came. Created by Michael Carnes, Josh Gilbert and showrunner David Graziano, “Coyote” sets itself up as an incisive character drama about a man who stumbles into a life and death situation that forces his black and white worldview to become gray. Instead, it comes off as a self-serious Western fantasy that’s more concerned with shocking its audience than making any sense.

The series — which premiered Jan. 7 on CBS All Access after originally being made for Paramount Network — stars executive producer Chiklis as Ben, a Border Patrol agent who retires in the pilot, much to his own frustration. It’s unclear why Ben is retiring, since he seems to love and understand his job more than most anything else in his life, but retire he does. Soon enough, though, he finds himself thrust into a high stakes escape from a dangerous Mexican cartel after a terrified woman (Emy Mena) climbs into his backseat and begs for help.

As we learn in sporadic flashbacks, Ben was hardly the most compassionate officer while on duty. In fact, as we learn in one particularly upsetting trip down memory lane, Ben is prone to shooting first and asking questions later to no real consequence. He’s rarely thought about the people he arrests as three-dimensional figures; he apparently never even learned more than a few scattered words in Spanish throughout his 32-year career. In the case of Maria, however, Ben recognizes that she’s about the same age as his daughter, thus activating some latent paternal instinct deep down. The series frames his willingness to help her as a compassionate turning point in his life, but fails to find much of interest therein. It barely fleshes out Maria’s character, nor that of Silvia (Adriana Paz), a Mexican local who sees something special in Ben that “Coyote” assumes the audiences will understand without giving any tangible reasons.

As played by Chiklis, a veteran actor of flawed TV authority figures, Ben’s rarely more than a blowhard who sees himself as the one true arbiter of justice. Maybe that appeals to some viewers, but to this one, watching Ben charge through every scene with righteous fists at the ready quickly becomes exhausting. No amount of sweeping coastline shots — and there are plenty, thanks to director Michelle Maclaren’s keen eye — can distract from the fact that this guy just isn’t smart or interesting enough to follow to hell and back, as “Coyote” otherwise requires.

It doesn’t help that the show’s structure is just as confusing as its protagonist. It opens with an in media res flash forward to a random cartel altercation and Ben trudging away from the border wall through the desert before cutting back “5 days later.” It then takes an episode and a half to reach that moment, before the show upends its own premise and throws Ben headlong into the insular politics of the cartel, headed up by its own cliché of a ruthless leader (played by Juan Pablo Roba). It’s one thing to show how quickly the ground can shift beneath Ben’s feet, and quite another for the series to constantly rewrite its own priorities.

To be blunt: a show that asks its audience to connect to a rogue Border Patrol agent with literal blood on his hands needs to work harder than this one does to justify its premise. As it stands, “Coyote” just feels like it was written by Ben himself while bored in retirement and itching for something more awesome to do than eat cereal alone and leave Home Depot parking lots without arresting anyone. It makes sense why he would see himself as the most fascinating person in his own story, but actually watching it unfold makes it difficult to agree.

“Star Trek” is aiming to keep its fans… engaged.

To commemorate the 54th anniversary of the original “Star Trek” TV premiere on Sept. 8, 1966, CBS All Access is mounting an all-day celebration of the full “Star Trek” franchise, including panels featuring cast members from and a marathon of selected episodes of every “Star Trek” series to date.

The marathon portion will stream for free for viewers in the U.S. only at the “Star Trek” website, starting at 12 a.m. PT / 3 a.m. ET. Twelve hours later, at 12 p.m. PT / 3 p.m. ET, the marathon will pause for eight panels for the various “Trek” series over a three-and-a-half hour period. Those panels will be free for viewers worldwide.

According to a release from CBS All Access, the panels will include:

Along with the event, CBS All Access will run a “pub quiz” on Twitch at 4 p.m. PT / 7 p.m. ET, debut “Star Trek” emojis on Twitter, and offer a flash sale of “Trek” merchandise.

Also, for every person who tweets with the hashtag #StarTrekUnitedGives during the event, CBS All Access will donate $1 to organizations that promote social justice and scientific advancements, including the NAACP Legal Defense and Educational Fund, and the Equal Justice Initiative.

Star Trek Day is the latest in a series of virtual fan events that have proliferated in the wake of the COVID-19 pandemic, as networks and studios attempt to cultivate and nourish fans’ engagement with genre entertainment in the absence of live fan conventions and events. Results have been mixed. Last month, Warner Bros. launched the DC FanDome: Hall of Heroes event to promote upcoming feature films, generating 22 million views worldwide over its 24-hour run. A second DC FanDome event, subtitled “Explore the Multiverse,” will be held Sept. 12.

‘Star Trek: Picard’ Renewed for Season 2 at CBS All Access

Patrick Stewart’s return as Captain Picard isn’t going to be a one-season affair.

CBS All Access has renewed “Star Trek: Picard” for a second season, over a month before its first season debuts.

The new show stars Stewart as he reprises his iconic, titular role as Jean-Luc Picard, which he played for seven seasons on “Star Trek: The Next Generation.” Isa Briones, Santiago Cabrera, Michelle Hurd, Alison Pill, Harry Treadaway and Evan Evagora also star. The series is produced by CBS Television Studios in association with Secret Hideout and Roddenberry Entertainment.

News of the renewal became evident when the California Film Commission announced which shows would be receiving tax credits in the upcoming year on Monday morning. A season 2 of “Star Trek: Picard” was on the list alongside new alongside four new shows including  “Nine Perfect Strangers” starring and executive produced by Nicole Kidman, and the “Untitled Showtime Lakers Project” at HBO which hails from executive producer Adam McKay.

“Picard” is the latest in a growing line of series that CBS is rolling out to build up its “Star Trek” TV universe. In addition to “Star Trek: Discovery,” which finished airing its second season on All Access back in April, upcoming shows include the animated comedy “Star Trek: Lower Decks” and a Nickelodeon animated series as well. A drama series centered on Michelle Yeoh’s character from “Discovery” is also currently in development at All Access.

‘Strange Angel’ Canceled After Two Seasons at CBS All Access

“Strange Angel” has been canceled at CBS All Access.

The drama, about rocketry pioneer and occultist Jack Parsons, ended its second season in July.

“The series brought new meaning to the idea that the truth is stranger than fiction and we are incredibly thankful to the creative team of Mark Heyman, David DiGilio, Ridley Scott and David W. Zucker for their vision, as well as the fantastic cast for bringing the bizarre story of Jack Parsons to life,” said Julie McNamara, executive vice president of original content at CBS All Access in a statement.

Created by Mark Heyman and based on the book “Strange Angel: The Otherworldly Life of Rocket Scientist John Whiteside Parsons” by George Pendle, “Strange Angel” was produced by CBS Television Studios in association with Scott Free Productions. Heyman, David DiGilio, Ridley Scott and David W. Zucker served as executive producers. Clayton Krueger served as co-executive producer. Originally developed for AMC, the series was one of the first produced exclusively for All Access, CBS’ direct to consumer streaming service.

This marks only the second cancelation to come at All Access, the first being “One Dollar” which was canned after a single season in Dec. 2018.

CBS All Access on the Streaming Wars to Come: ‘We Don’t Fear These Changes’

CBS All Access is ramping up its offerings to at least 12 original series in 2020, said streaming service execs at the Television Critics Assn. summer press tour Thursday, with additional plans to expand programming into sports, movies and nonfiction titles, and series acquisitions.

Part of that early selection includes World Series of Poker bracelet events, the pickup of All Access’ first Nintendo-versus-Sega feature documentary “Console Wars” and the acquisition of off-network streaming rights to “Nancy Drew,” which debuts on the CW in the fall. That acquisition comes amid the end of a multi-year output deal between the CW and Netflix.

“You can expect this to be just the beginning of more to come from us in terms of series acquisitions as we go forward, ” said President and COO Marc DeBevoise on stage to a roomful of reporters and TV critics.

But don’t expect all of CW’s future shows to necessarily wind up on All Access. Speaking to Variety later, All Access original-programming chief Julie McNamara said that such buys, of CW series or otherwise, would be made on a “case-by-case” basis.

During the presentation, DeBevoise was bullish on All Access’ position in the market, even as a field of contenders — Disney Plus, HBO Max, NBCUniversal’s streamer — looms large in the not-too-distant future.

“We don’t fear these changes,” he said. Like many of his peers in the streaming space, DeBevoise does not believe that the competition is a zero-sum game, noting that consumers subscribe to an average of 3.4 subscription video-on-demand service, and that 80% have at least one service.

That said, he touted the strength of All Access’ arsenal of 12,000-plus episodes, titles and movies, versus the 8,000 pieces of content and 3,000 episodes and program that premium over-the-top services from Starz and HBO offer, respectively. (All Access likens itself to premium services more so than, say, a Netflix, Hulu or Amazon.)

“We are multiples the size of HBO’s total catalog size, and only cost $6-$10 more, depending on the package that you take,” he said. “It’s a tremendous value proposition for consumers.”