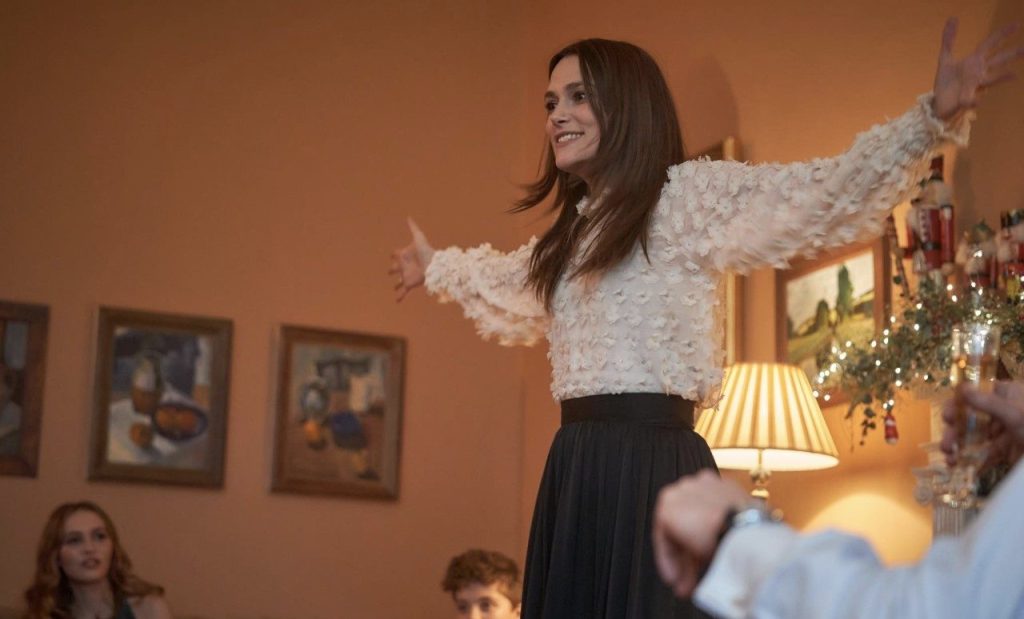 For anyone who — toward the end of a long, loud, fractious familial gathering at Christmas — has ever fleetingly wished death on their nearest and dearest, “Silent Night” is an uncomfortable sort of wish-fulfilment exercise. Near the beginning of Camille Griffin’s ambitious, genre-melding debut feature, Keira Knightley’s stressed hostess announces that this year’s holiday is going to be “all about love and forgiveness”: the kind of thing people say every year, of course, though this time, the instruction has a sort of last-rites finality to it. For this will, it seems, be every guest’s last Christmas. A toxic cloud of lethal poison is sweeping the planet, and it’s set to hit Knightley’s luxe manor in the English countryside sometime past midnight on Dec. 26, so there’s nothing for the guests but to drink, feast and make merry as if there’s no tomorrow — because, well, there isn’t.

That sets the stage for some pretty wild end-of-days action, but “Silent Night” never fully ramps up to it. Perhaps there’s some truth to its suggestion that the world will end with more of a whimper than a bang, but one can’t help thinking that some of the squabbling drama Griffin has cooked up here is unequal to the occasion. Indeed, her debut is most effective when it dispenses with the “Peter’s Friends”-style dramatics — between a group of one-dimensional characters who never really convince as people who would willingly hang out together — and veers into darker, horror-adjacent terrain, toward a twist that is at once tingly and a tad predictable. Streaming service AMC Plus and RLJE Films have already picked up “Silent Night” for a day-and-date release in December, when it’ll serve its purpose as a feel-bad seasonal counter-programming option — though it’s neither funny nor haunting enough to become a holiday staple.

At the very least, “Silent Night” expands Knightley’s Christmas-movie legacy beyond the most inadvertently creepy strand of “Love Actually.” Her likable, fittingly flustered performance as a wife and mother immersing herself in the usual pressures of Christmas hosting — if only to postpone thoughts of more extraordinary concerns brewing outside — holds this uneven enterprise together in much the same way her character Nell keeps her game face on as her party lurches into episodes of panic, terror and heated ethical debate. For the film’s opening 20 minutes, however, it’s all standard-issue Christmas fuss, complete with Michael Bublé puttering away cheerfully on the soundtrack: Nell frets over not having enough potatoes, her eldest son Art (“Jojo Rabbit” star Roman Griffin Davis, the director’s son) cuts his finger while helping out with the carrots, while his younger twin brothers (Hardy and Gilby Griffin Davis, extending the family affair) just won’t get ready. Family friends arrive, Prosecco is popped, the sniping begins.

It’s only midway through dinner that the subject everyone has been strenuously avoiding is unavoidably raised, and “Silent Night” finally reveals its hand as a last-night-on-earth fantasy, like Lars von Trier’s “Melancholia” as reconceived by Richard Curtis. The imminent poison is said to cause a prolonged and painful death upon exposure; the government is instead prescribing suicide pills to the general public. Nell and husband Simon (Matthew Goode) have dutifully obtained theirs for the whole family, though not everyone at the gathering is in favor: In particular, lone American Sophie (Lily-Rose Depp), the girlfriend of practical minded doctor James (Sope Dirisu), raises the question of whether they shouldn’t just take their chances.

The urgent existential debate that ensues sits awkwardly with the more banal infighting over bratty children, secret crushes and who has (or hasn’t) slept with whom: The characters, ranging from vain, horny trophy wife Sandra (Annabelle Wallis) to funky, foul-mouthed lesbian Bella (Lucy Punch), are such thin, conceived-in-a-vacuum stereotypes that we can never really invest in their inexplicably longstanding joint friendship. And while Griffin’s script makes a cursory nod to English class politics — identifying Nell from the outset as an emblem of the Aga-owning, Waitrose-shopping upper classes — the group seems so vaguely and uniformly well-off (they all went to the same private school, for starters) that any tensions between its members remain woolly.

It takes a child, amid all the bickering and boozing and late-nighty boogying, to bring matters back round to the apocalypse — in a surprisingly visceral way that teases a more abrasive, more interesting, more truthful film beneath all the sparkly seasonal wrapping. Distracted for long stretches with ribbons and bows, “Silent Night” never uncovers its harshest possibilities: It’s sober and well-behaved even when the party falls to pieces.