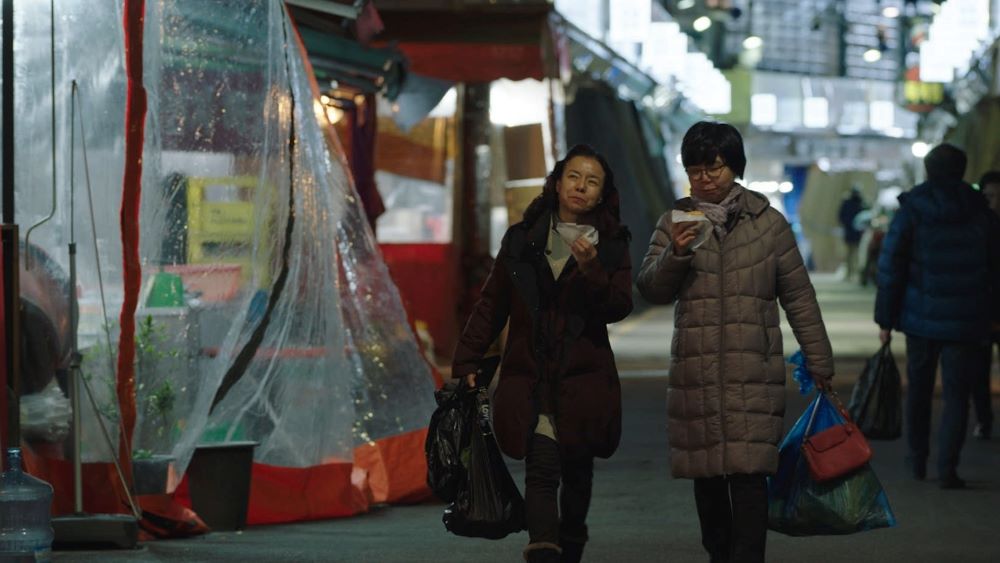 The Busan International Film Festival announced joint winners in both of its prestige sections, the New Currents competition for emerging Asian filmmakers and the Kim Jiseok showcase for works by the region’s more established directors.

Korean-made “The Apartment With Two Women” and Chinese film “Farewell, My Hometown,” both first features, shared the New Currents award.

In the Kim Jiseok award section Brillante Mendoza’s boxing drama “Gensan Punch” split the first prize with Aparna Sen’s “The Rapist.” In the same section, a special mention was made for “The Bargain,” by China’s Wang Qi.

The announcements were made on Friday morning at a press conference at which festival organizers critiqued matters such as levels of audience attendance, two delayed screenings and a new community outreach program.

They confirmed that just one guest tested preliminary positive for COVID-19 while in Busan. Festival staff will be subjected to a further two weeks of additional testing. Foreign guest numbers were painfully low at just 60, though that was an increase compared with 2020.

In a final report, organizers said that although cinema seating was limited to 50% of normal capacity, occupancy ran at 80% and that the festival welcomed 76,000 spectators. Screenings for the new On Screen section, which gave public screenings to three streaming series, were all sold out.

Busan’s market events also rebounded after last year’s first time as a largely online event. Online badge registrations climbed from 885 in 2020 to 1,479 in 2021. There were 200 online booths, up by 94 from last year. The E-IP Pitching section was particularly robust. It included 45 selections (from Korea, Japan and Taiwan) and organized 216 online meetings and a further 608 on site.

Speaking at the wrap event, new market chief Oh Seok-geun said that while he is keen to return to in-person events next year, a digital or hybrid component is likely to be retained. All of this year’s online market elements will remain available until the end of the month.

The festival will close later in the day with a screening of Longman Leung’s Anita Mui biopic “Anita.”

Actor of the Year Award

Kwon Daham in “Through My Midwinter” (Korea)

Actress of the Year Award

Im Jee-ho in “The Apartment With Two Women (Korea)

“Through My Midwinter” Dir. Oh Seongho

“A Lonely Island in the Distant Sea” Dir. Kim Miyoung

“Through My Midwinter” Dir. Oh Seongho 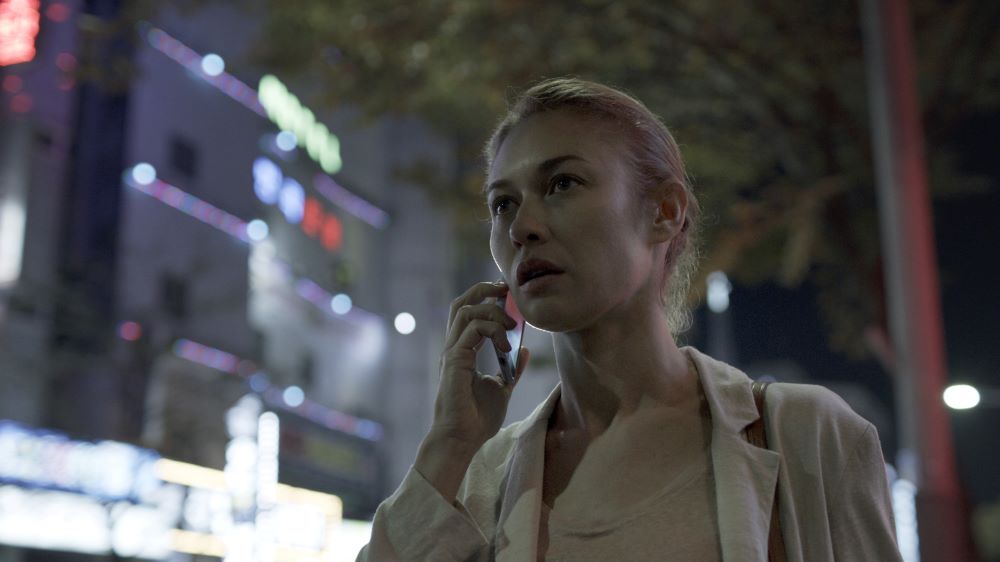 Thursday saw the world premiere of the French-made, Korea-set romantic thriller, “Vanishing” at the Busan International Film Festival. Its director Denis Dercourt said that the movie attempts to straddle both cultures.

Adapted from the Peter May novel, “The Killing Room,” the script was in the works for eleven years, according to Alexis Dantec, the film’s producer. Originally slated for launch in 2020, filming was delayed due to the pandemic.

The story follows a forensic scientist (played by Kurylenko) who invented a technique for restoration of damaged corpses. She visits Korea for a conference and upon the request of a Korean police detective (played by Yoo), assists in an investigation. That leads to the discovery of an organ-trafficking syndicate.

During an intimate Busan press conference on Friday, Dercourt said, “We originally wanted to shoot in China, but since censorship was a challenge, we had to consider other options.”

“Korean entertainment is very trendy in France now and its influence globally made shooting in Korea a clear choice,” Dercourt said. “The experience was nothing but good and thanks to the crew, we shot everything in 20 days.”

Dercourt said that when collaborating with talented actors or a diligent crew, he is undeterred by language barriers. “I give my actors a lot of freedom to express themselves as their characters and, just like music, you can feel their performance.”

Dercourt spoke highly of the actors and said, “[Yoo] Yeon Seok is rather shy. And we had no idea how popular a star he is. He was keen to learn the European way of directing and I wanted to understand the Korean way of acting.”

Dercourt said, “It was hard bringing both countries’ cultures together, not only with language differences, but tiny nuances that would make or break the film. For example, the French have a very different take on romance compared to Koreans, so we had to modify part of the script and storyline for it to be realistic and appeal to audiences from both cultures.”

Ye displayed French proficiency in her role as an interpreter and, being an avid fan of French culture, said she was thrilled to be part of “Vanishing” at the premiere’s Q&A session. Dercourt said, “I included [Ye] Ji-won’s character for more French in the film and to demonstrate a woman’s inner conflict between right and wrong.”

This combines French and Korean elements. But Dercourt wanted to ask the audience whether the film felt more French or Korean. In a room filled to maximum occupancy after its first screening on Thursday, the majority voted “Korean.” Dercourt said he took that as a compliment. 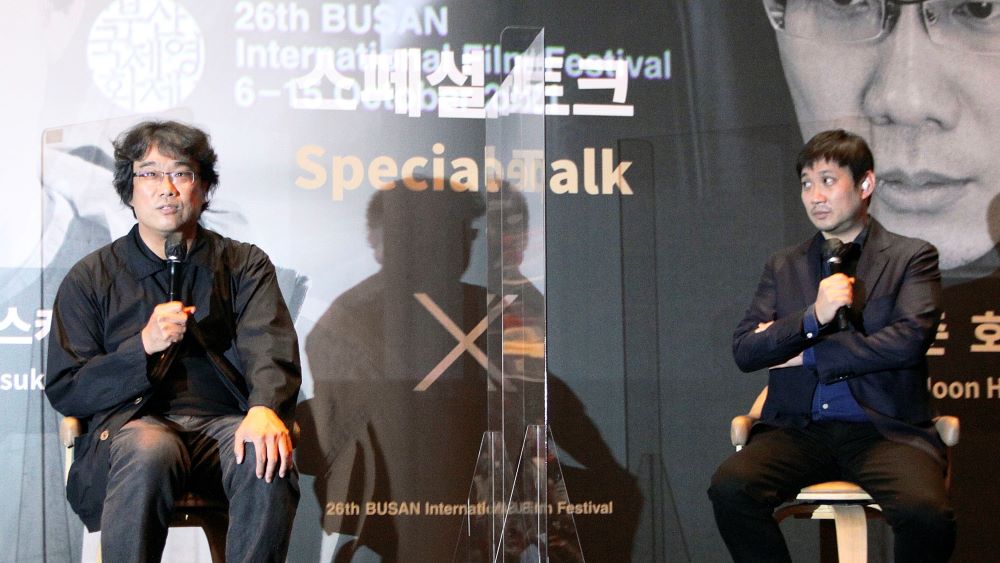 The ongoing COVID-19 pandemic has disrupted film productions, releases and festivals. But nothing, it seems, can get between Korean film and TV fans and their idols, and this week’s Busan International Film Festival is managing to pull off a series of in-person events, despite strict safety protocols.

The first of these, on Thursday, included so-called Open Talk sessions focused on Netflix series “Hellbound” and “My Name,” which are both part of the festival’s new On Screen sidebar. There was another event for sci-fi adventure film “Space Sweepers” (which went straight to streaming after its theatrical release was canceled, but which nevertheless plays at the festival) and an on-stage discussion between top East Asian directors Bong Joon-ho and Hamaguchi Ryusuke.

In each case, venues were filled to their 50% capacity limits. Thousands more fans, many from overseas and oblivious to the lack of foreign-language translations, followed a livecast on Naver Now. Proximity, contact and photos are typically the purpose of many such fan meetings, not meaningful insight or news announcements.

At the “Space Sweepers” session, with director Jo Sung Hee and cast Song Joong Ki (who also stars in current Netflix legal drama “Vincenzo”) and Jin Seon Gyu, song said: “I’m glad to be here with so many seniors from the film industry.” Jin said, “Busan is truly a place where film lovers gather, great it’s by the sea too.” Jo and Song both previously worked on acclaimed 2012 fantasy romance “A Werewolf Boy,” and on stage they joked about collaborating again without another ten-year wait.

The session wrapped with a further round of photo-taking, Song posing, and fond farewells between stars and the adoring crowds. 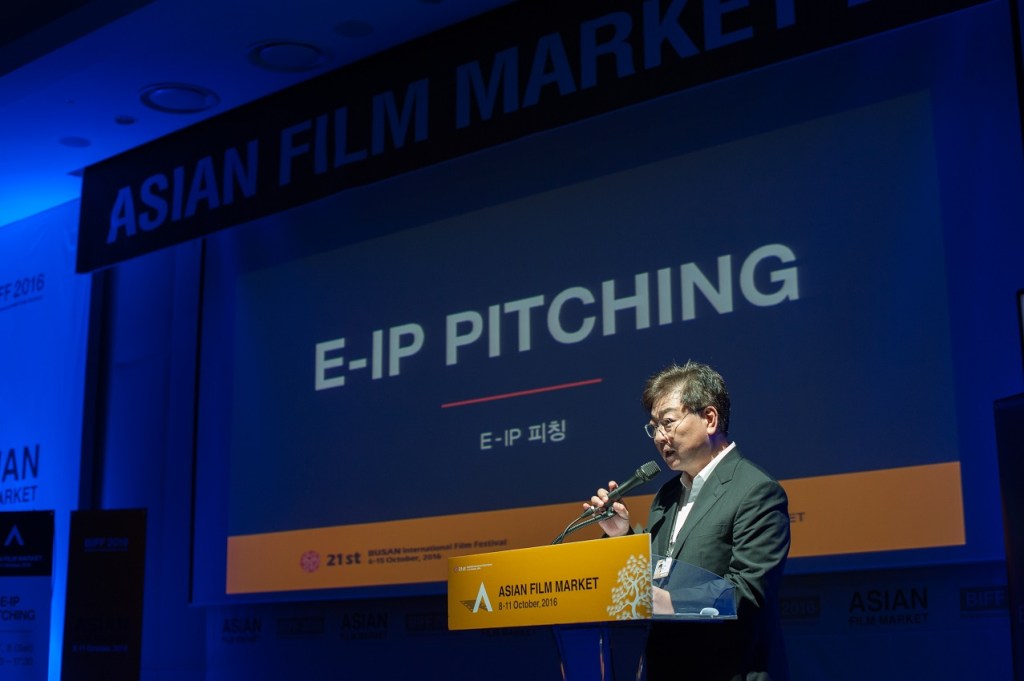 Mystery-themed content is a key strand of the E-IP market set to take place next month alongside the Busan International Film Festival.

The pitching and intellectual property trading event (Oct. 11-14, 2021) is the only component of Busan’s Asian Content and Film Market this year that will be operated as a hybrid combining both online and onsite events. The longstanding rights market for completed films, in contrast, will be online-only for the second year, due to ongoing anti-COVID restrictions.

The impetus for the E-IP market’s in-person component comes from the vibrancy of the marketplace for intellectual properties of many kinds that can now be developed into films, TV series or short-form content.

Busan’s E-IP market was launched in 2012 and has proved popular as books, webtoons, web novels, story treatments and video games have all been discovered to have the potential to be developed, packaged and traded. The seemingly unlimited demand for original content by an ever growing number of streamers has further stoked demand.

To date, 160 Korean properties have been presented. In 2019, the market was extended to include properties from Taiwan and Japan through partnerships with the Taiwan Creative Content Agency (TAICCA) and the Visual Industry Promotion Organization (VIPO). That format has been retained for 2021 as well. This year, organizers have unveiled 45 official selections were unveiled: 28 hailing from Korea; ten from Taiwan; and seven from Japan.

While the stories span a diverse range of genres from fantasy to drama, action, thriller and comedy, mystery is the focal theme for several.

These include “Gyeongseong’s Women’s Counseling Center” and “The Evaporated Woman”. The former is a story set in the 1930s, about a young protagonist in her twenties who returns from studies abroad and meets two other young ladies. They set up a counseling center and become detectives, solving a myriad of cases in a bid to help the women who knock on their door. The underlying book is written by Kim Jae-hee.

“The Evaporated Woman,” authored by Kim Youngju, depicts the story of a woman who loses everything overnight only to find a glimmer of hope through a high-flying director at a chaebol corporation. The condition for her salvation is that she should discard her past and live instead as her dead sister. As she struggles with her own identity, the woman discovers shocking events that lead to an uncontrollable fear and a difficult escape.

Teen romances, stemming from popular web toons, are another thematic staple of the Korean IP market.

In “Dorona Farewell Office” a novel by writer Son Hyunju, breaking up is hard to do, but the agency in question removes the difficult and awkward situations for its clients. The concept is pitched as a reflection on human relationships and the essential partings

Other romance projects getting an airing at the E-IP market include: “The Gate of Solitude: Cinderella-The Mystery Cuisine 3,” ”Reply: Hate Comments” and “How to Deal With an Evil Boss?”