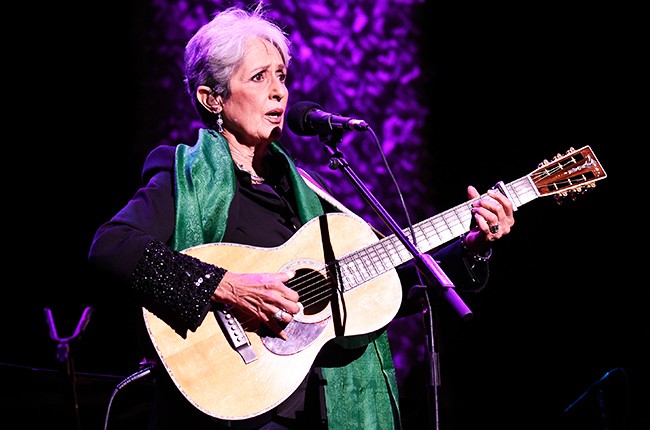 Joan Baez is this year’s recipient of the Woody Guthrie Prize, in recognition of her “groundbreaking career and impact on humanitarian causes.”

The legendary folk singer, activist and Rock and Roll Hall of Famer will be inducted Aug. 16 during a virtual edition of the Philadelphia Folk Festival.

The prize was established in 2014 and is given each year to an artist who best exemplifies the spirit and life work of Woody Guthrie by speaking for the less fortunate and serving as a positive force for social change.

Baez “has consistently been on the front lines in the fight for social justice, peace, and equality,” comments Woody Guthrie Center Director Deana McCloud in a statement.

We are proud to announce @joancbaez as the recipient of the 2020 Woody Guthrie Prize honoring her groundbreaking career and impact on humanitarian causes.

The award will be presented to Baez during our segment of this year’s virtual edition of the @FolkPhilly on August 16. pic.twitter.com/tVyZG9Ck9t

“It has been my mission to use my music as a voice for those who cannot be heard or have been silenced by fear and powerlessness,” Baez said.

Baez’s 25th and final studio album Whistle Down The Wind, her first new LP in nearly a decade, arrived in early 2018.

A New York native, Baez was inducted into the Rock Hall in 2017.