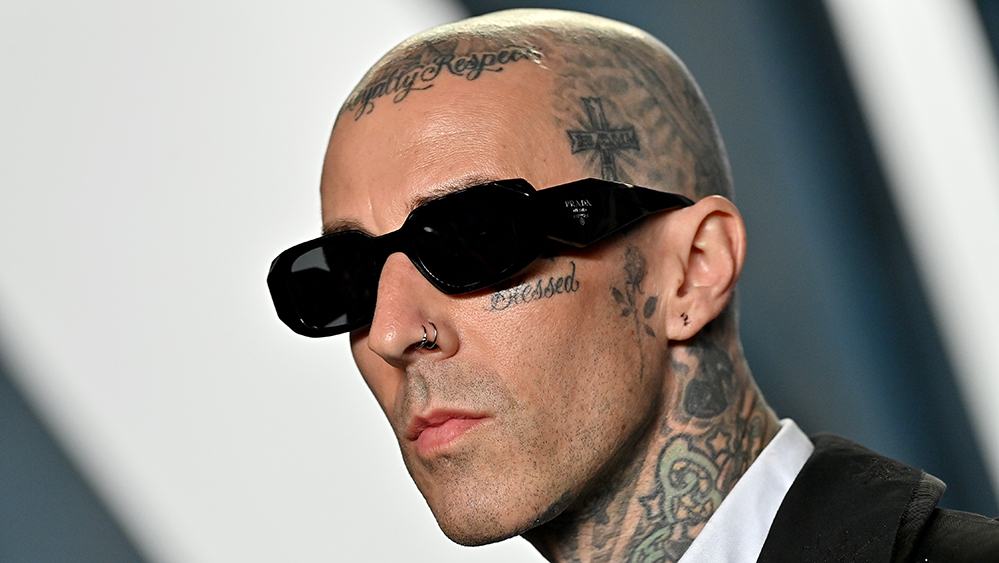 After being hospitalized Tuesday in a medical emergency, Travis Barker has shared that he is “currently much better.”

The 46-year-old Blink-182 drummer and husband to Kourtney Kardashian shared a message regarding his health to fans through his official Instagram, explaining that he had a pancreatic drainage tube damaged during a routine endoscopy. He expressed his gratitude that he has begun to make a recovery.

“I went in for an endoscopy Monday feeling great,” Barker wrote. “I developed excruciating pain and have been hospitalized ever since. During the endoscopy, I had a very small polyp [a tissue growth] removed right in a very sensitive area, usually handled by specialists, which unfortunately damaged a critical pancreatic drainage tube. This resulted in severe life threatening pancreatitis.”

Pancreatitis refers to inflammation of the pancreas, which causes symptoms like nausea, intense stomach pain and vomiting.

“I am so very very grateful that with intensive treatment I am currently much better,” Barker’s messaged concludes.

Kardashian also shared a statement about Barker’s health through her own Instagram story.

“Oh what a scary and emotional week it has been. Our health is everything and sometimes we take for granted how quickly it can change,” Kardashian wrote. “I am so grateful to God for healing my husband, for all of us your prayers for him and and for us, for the overwhelming outpouring of love and support. I am so touched and appreciative. I am so so thankful to our specialists, doctors and nurses at Cedars Sinai for taking such wonderful care of my husband and me during our stay.”

After beginning his career in the music industry in the 1990s, Barker has reached a renewed level of visibility in the public eye in recent months. The drummer’s relationship with Kardashian was closely documented in episodes of Hulu’s “The Kardashians” last year. The pair officially married in Portofino, Italy in May. 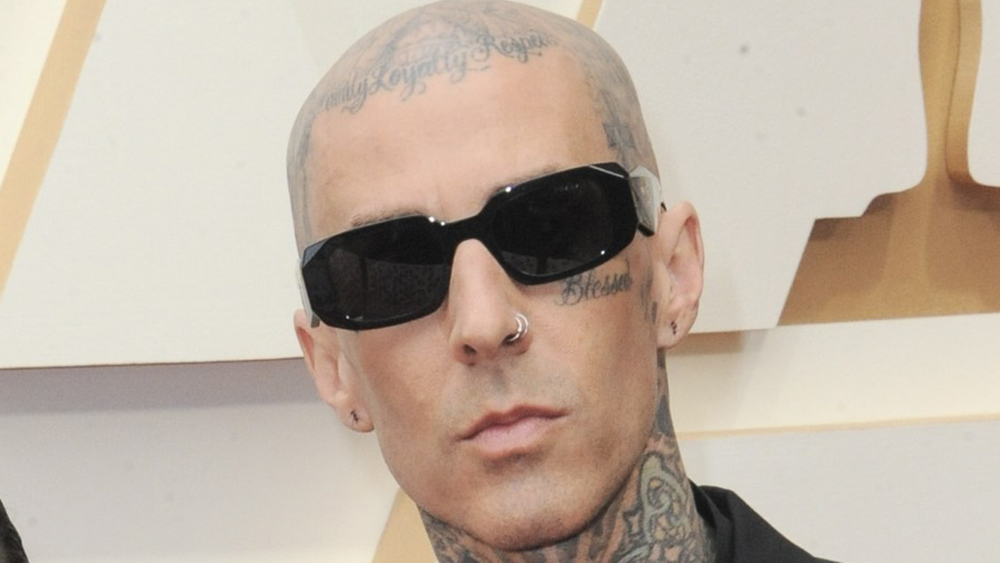 Travis Barker was reportedly hospitalized in Los Angeles Tuesday for an undisclosed reason.

According to multiple reports, the 46-year-old Blink-182 drummer and husband to Kourtney Kardashian was rushed to Cedar-Sinai Medical Center for further care after first checking into West Hills Hospital and Medical Center Tuesday morning.

At 10:45 a.m. PT Tuesday morning, Barker shared a vague message on Twitter, possibly alluding to his medical condition. “God save me,” the drummer wrote.

However, Barker’s short post has not been the only activity on his Twitter account since. His account also retweeted a post from Billboard sharing an article about his recent work with singer Jxdn, who collaborated on two singles in honor of Jxdn’s late friend Cooper Noriega. The duo’s singles were released earlier Tuesday.

Barker has been a force in the music industry for nearly three decades, most recently collaborating with artists like Machine Gun Kelly and Post Malone. He performed at the 94th Academy Awards ceremony at the Dolby Theatre in March.

He had more recently risen to a more conspicuous level in the public eye, as his relationship with Kourtney Kardashian was documented in the first season of Hulu’s “The Kardashians” last year. The couple were officially married in Portofino, Italy in May.

Representatives for Barker and Kardashian were not immediately available for comment.

TMZ was first to report news of Barker’s hospitalization. 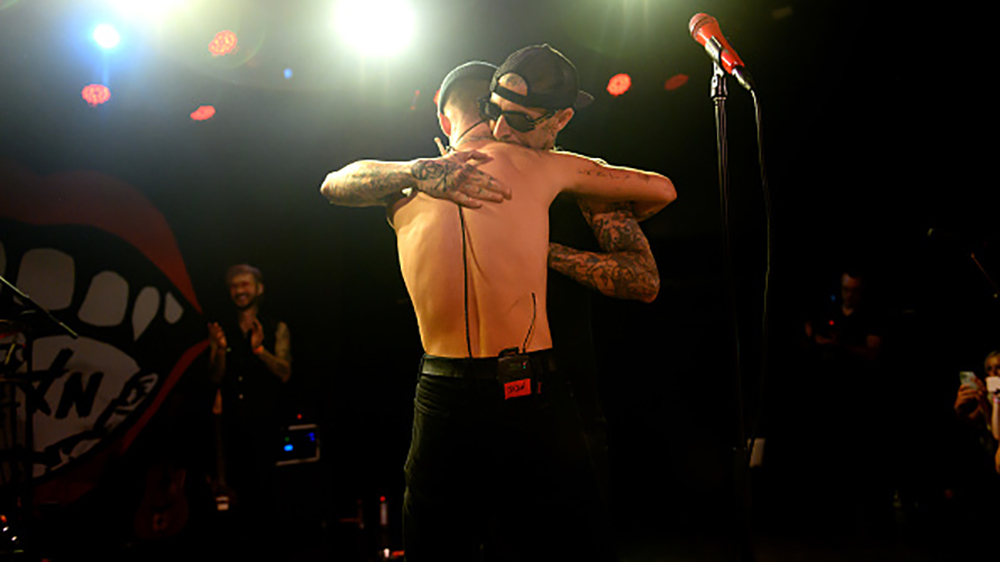 Pop-punk revivalist Jxdn rang in his first live show ever at the Roxy Saturday night with a slew of special guests, including Blink-182 drummer and mentor Travis Barker, rapper Iann Dior and singer Nessa Barrett.

The show was a short hour-long event, with no opening acts, but still packed a punch. Jxdn’s gratitude to be performing live for the first time following the COVID-19 quarantine was palpable, though an eerie air hung over the crowd with the impending restoration of Los Angeles’ mask mandate at midnight. Still, Jxdn played to a mainly maskless, limited capacity crowd, which was a mix of teenagers, industry players and his friends and family (in a sweet show, Jxdn’s mom was perhaps rocking out the most of anyone throughout the night).

The 20-year-old singer — who amassed a following on TikTok as part of the content hub Sway House and was later discovered and signed by Barker to his DTA Records — kicked off his first-ever live set with “Think About Me,” the third track from his debut album, “Tell Me About Tomorrow,” which released July 2. Sporting a fitted baby blue Sonic Youth t-shirt and black beanie, Jxdn fit the bill of a rockstar as he bounced around the stage, feeding off the energy of his live band. Drummer Tosh Peterson and guitarist Kenji Chan provided a solid backbone for Jxdn’s vocal delivery, which was at times understandably strained by the amount of moving around he was doing, but hit the mark during moments of focus. Peterson was particularly impressive, soldiering through back-to-back drum-heavy songs while incorporating antics like standing on his drum set and interacting with fans.

The night’s special guests began just a few songs into the set when Jxdn brought out rap and pop-punk crossover Dior, who became an overnight sensation in 2020 with his feature on 24kGoldn’s “Mood,” topping the Billboard Hot 100 for eight non-consecutive weeks. The two performed their collaborative single, “Tonight,” which quickly became a highlight of the set due to their light-hearted performance chemistry.

This being Jxdn’s first ever live performance, the event provided an interesting preliminary study on the many musicians who have blown up over the COVID-19 quarantine via social media, without having a chance to prove their chops on stage first. Jxdn rose up to the challenge gracefully, making up for any inexperience with impressive spurts of energy and fan interaction. After performing his song “One Minute Left,” Jxdn even asked the crowd: “Who here plays guitar?” In response to a screaming girl in the front row, Jxdn handed her a cherry-red guitar from backstage. Though perhaps an expensive habit to form for every live show, the thought of the lifelong passion that could come from such a gift is certainly heartwarming.

The songs in Jxdn’s set rolled by one after the next, mainly featuring cuts from his new album like “Braindead,” “DTA” and “No Vanity.” The performance was always better when Jxdn’s vocals were allowed to shine through, such as in “Last Time” and an acoustic version of one of his first singles, “So What.” Backed by just a guitar, Jxdn’s ragged-yet-rich voice proved his talent outside of the recording studio, and provided a moment for the crowd to catch its breath after a slew of upbeat tracks.

Perhaps Jxdn performs his best while being vulnerable, as the best song of the night came in his album’s titular track, “Tell Me About Tomorrow.” Tears clouded Jxdn’s eyes as he introduced the song, dedicating it to his friend in the audience who has struggled with addiction. “I’ve been through it and I’m sure some of you have too,” Jxdn said before diving into the heartfelt tune, which sees him singing in a lower register and at a slower pace than normal.

Jxdn’s breakout single “Angels & Demons” was the “last song” of the night, and Jxdn prompted everyone to “go stupid” before L.A.’s mask mandate returns. In response, the crowd jumped in unison, with many shouting every word.

But, of course, that was not the last song – after all, Jxdn’s collaborator and girlfriend Barrett was in the crowd, and would this really be Jxdn’s first show ever without an appearance from Barker? My hunch was proven correct when a crew came out to adjust the drum set to Barker’s liking, and soon enough Jxdn was back on stage, asking the crowd: “Is it alright if I bring Travis Barker out here?”

Barker walked out in a simple black tanktop and large black sunglasses, and Jxdn greeted Barrett on stage with a kiss as the crowd screamed. The trio then launched into “La Di Die,” a rumination on the downsides of fame. The crowd was given new life by Barker’s tight drumbeat, and Jxdn’s relief at finishing his first ever show gave him an extra burst of energy to close out the night. As the final notes played and the crowd cheered, Barker surprised Jxdn with a bear hug from behind his back, beaming with pride.