Tony Bennett’s Son, Danny, on Why the Legend’s Radio City Music Hall Shows Went So Well — and Why There Won’t Be More 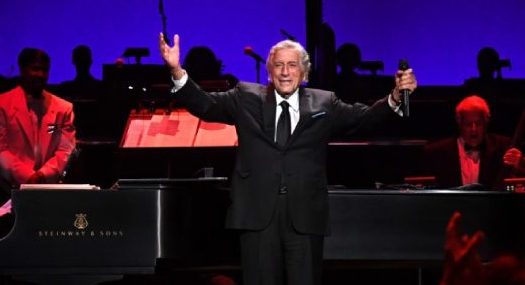 It’s been a week since standard-bearing crooner Tony Bennett and his collaborator Lady Gaga ripped triumphantly through two sold-out shows at Radio City Music Hall in New York City, the first of which celebrated his 95th birthday, complete with a Gaga-led, congratulatory sing-along. And Danny Bennett’s head is still spinning.

From his father’s usual concert entrance pose with arms held high and spread wide to the complexly nuanced manner he which he addressed each syllable, the singer was at his best during those Radio City Music Hall shows.

“Tony always takes chances,” says Danny Bennett, 66, his father’s manager for the last 40-plus years, and the man who helped make the Astoria-born saloon singer a household name for the MTV generation. “It is, as he has always said — when others zig, he zags.”

The two Radio City concerts, dubbed “One Last Time: An Evening With Tony Bennett and Lady Gaga” – and held in anticipation of the platinum pair’s second duets album, “Love for Sale” (to be released October 1 via Columbia/Interscope Records) – were billed as Bennett’s final New York City shows, with additional concerts to follow along the east coast.

Sadly, however, the Radio City Music Hall shows will be Bennett’s last anywhere, as the announcement came Thursday morning that Bennett’s short run of fall 2021 tour dates had been canceled. The brief casino tour was to have consisted of pre-pandemic concert dates that had been rescheduled for 2021, starting in September and ending in December.

“There won’t be any additional concerts,” his son makes clear. ”This was a hard decision for us to make, as he is a capable performer. This is, however, doctors’ orders. His continued health is the most important part of this, and when we heard the doctors — when Tony’s wife, Susan heard them — she said, ‘Absolutely not.’ He’ll be doing other things, but not those upcoming shows. It’s not the singing aspect but, rather, the traveling. Look, he gets tired. The decision is being made that doing concerts now is just too much for him. We don’t him to fall on stage, for instance — something as simple as that.” But, emphasizes Danny, “We’re not worried about him being able to sing. We are worried, from a physical stand point… about human nature. Tony’s 95.”

It has been, in Danny Bennett’s estimation, an exciting month. Along with dropping a video for “I Get a Kick Out of You” with Lady Gaga, and announcing their tribute album to the songs of Cole Porter, the shows at Radio City Music Hall were, in Danny’s words, “triumphant. He sounded amazing for a man of any age.”

Danny Bennett tells a funny story of how fans of his father approached Danny during the Radio City Music Hall shows. In 2020, the family revealed that Tony Bennett had had Alzheimer’s disease since 2016, a debilitating form of age-related dementia characterized by progressive memory loss. But some fans were certain the evidence showed otherwise.

“They kept telling me that we lied, that there was no way Tony had Alzheimer’s,” says Danny with a soft chuckle. “I assured everyone that he does. … Yes, here he was, at 95, and still singing like this: strong, Emotive. But still, it is a complex question: how can he do this?

“My answer is that this is where he has lived his whole life and where he is most happy — on the stage, making music. Dealing as we have with Alzheimer’s for the last four-five years, it’s cognitive. He has short-term memory loss. That, however, does not mean that he doesn’t still have all this stored up inside of him. He doesn’t use a Teleprompter. He never misses a line. He hits that stage, and goes. Tony may not remember every part of doing that show. But, when he stepped to the side of the stage, the first thing he told me was: ‘I love being a singer.’”

A host of New Jersey’s most celebrated musical talents — including Bruce Springsteen, Jon Bon Jovi, Charlie Puth, Halsey, SZA and Fountains of Wayne, plus one adopted son from New York, Tony Bennett — came together Wednesday for “Jersey 4 Jersey,” a benefit webcast to raise funds to fight the medical, social and economic impact of the coronavirus on local communities

“Welcome to Jersey 4 Jersey,” Springsteen said in opening the show, organized by the recently-launched New Jersey Pandemic Relief Fund (NJPRF). “We are here tonight dedicated to our healthcare workers and all of those who lost loved ones who are suffering and dying with this terrible disease right here, right now, in our beloved state.”

Dressed in a blue shirt and accompanied by wife and E Street Band member Patti Scialfa, the Freehold native delivered, for the first of his two numbers on the telecast, an inspiring rendition of “Land of Hopes and Dreams.” Springsteen’s voice is one people look to to feel better in times of uncertainty, and the choice of a song with the lyrics “Leave behind your sorrows / Let this day be the last / Tomorrow there’ll be sunshine / And all this darkness past” was a perfect way to begin the show on a hopeful note, much as he did 19 years ago when he performed