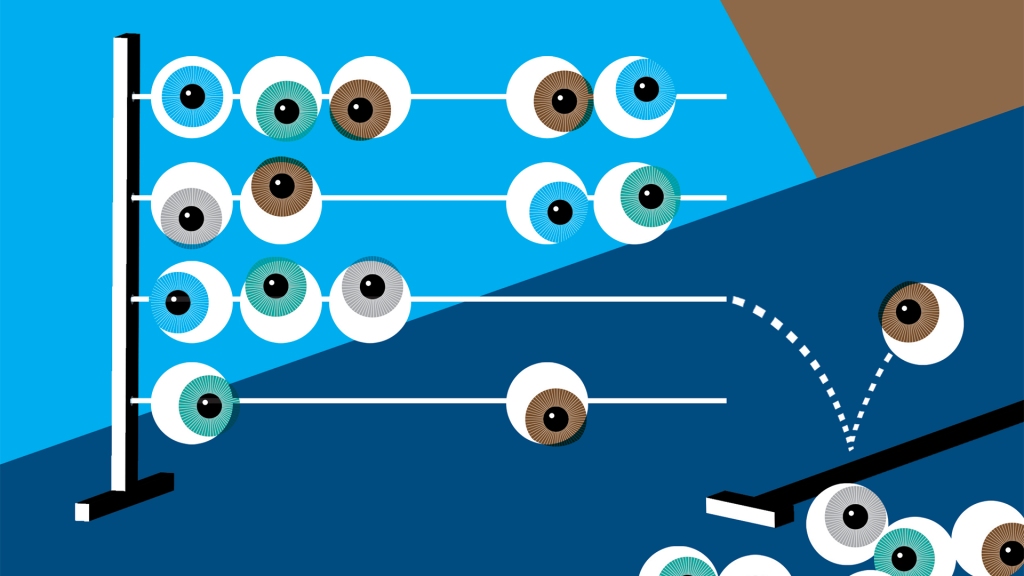 Don’t count Nielsen out as the media industry scrambles to find new ways to tabulate audiences increasingly making their way to venues other than a traditional TV set.

The media measurement giant, whose work serves as the bedrock for most TV-advertising deals, intends to launch new technology that can provide so-called “cross screen” viewership of video content that might appear on traditional TV or on new digital screens, whether they be desktop, mobile, or streaming. While the “Nielsen One” framework won’t be fully implemented until December of next year, Disney and Interpublic Group’s Magna, the large media investment firm, are among ten companies that will provide early feedback in the interim.

“We are focused on what the vast majority of the industry wants to be able to offer — transparency, efficiency, accredited metrics,” says Karthik Rao, Nielsen’s chief operating officer, in an interview. Nielsen expects to debut its new framework at CES early next year, though the data will not be released publicly until the official launch as currency at the end of 2022.

The announcement shows Nielsen working to maintain its relationships with TV networks and advertisers as many of them have begun developing alternatives to its well-used services to count audiences flocking to ad-supported streaming outlets like Hulu, Pluto and Peacock. Nielsen has been under scrutiny for months, with the networks deriding its ability to count traditional TV audiences during the pandemic.

Many sector stalwarts, including NBCUniversal, Univision and WarnerMedia, have said they intend to offer new ways to measure viewership, working with measurement rivals including VideoAmp, Comscore and Open AP. ViacomCBS and large media investment units of Dentsu intend to start doing transactions next quarter using non-traditional criteria Nielsen has said it sees a need to move faster and has also started to overhaul the way it counts viewership of individual commercials, a bedrock element of the currency of TV advertising deals.

Disney intends to join in Nielsen’s new “Nielsen One Alpha” program “to ensure it accurately creates a holistic view of ad performance and content viewership for the industry,” says Julie DeTraglia, head of research, insights and analytics for, Disney Media & Entertainment Distribution, in a statement. Magna, which helps marketers allocate ad dollars, intends to “ensure it delivers on its promise of being a truly holistic cross-screen measurement solution,” said Brian Hughes, executive vice president and managing director of audience intelligence and strategy, for the Interpublic Group company, in a statement.

Nielsen and the networks have been engaged in a protracted showdown over whether the measurement giant can count TV crowds correctly amid the industry’s rapid move to streaming video. In May, the MRC, a little-known body formed at the behest of the U.S. government in the wake of TV’s quiz-show scandals in the 1950s to maintain measurement standards for the media and advertising industries, found Nielsen had, in fact, undercounted TV viewers earlier this year. The group subsequently revoked its accreditation of Nielsen’s national and local ratings services.

While the measurements remain in place and are still widely used, loss of the industry’s seal of approval has given rivals impetus to test new audience-counting methodologies. Many media and advertising executives say they expect the industry to do ad deals based on a wider variety of currencies, not just Nielsen’s data.

Executives at Nielsen say they have long contended with rivals offering measurement services and will continue to do so. “Our job is to provide the most comprehensive form of coverage,” says Rao.

He was unable to provide an estimate as to when Nielsen might regain accreditation from the MRC, noting that Nielsen does not control when that group votes and makes decisions. “We have the list of issues from the TV committee” of the MRC, says Rao. “We are already making tremendous progress against many of them.”

But the company’s ability to secure so many participants in its early launch suggests Nielsen still retains some advantages. Nielsen has reigned for decades because many top advertisers have called for a neutral third party to count consumers attracted to a particular media property. Winning accreditation is a complex task, as is developing the broad infrastructure that broad audience measurement requires and may require investment the networks and agencies don’t want to make.

There has been some speculation among media executives that the networks are making an aggressive bid to counter Nielsen as a means of getting better terms in their ongoing contract talks with the measurement giant. The media companies pay Nielsen millions of dollars a year for its services, and feel they aren’t getting full value.

Nielsen’s Rao appeared sanguine about the company’s prospects as the business of TV grows more complex. The new framework “is very aligned with what the advertisers want,” he says.

At a time when automakers have cut back on ad spending, Ford Motor Co. will rev its marketing engines for a unique commercial alliance with Walt Disney’s video properties.

The large U.S. advertiser intends to unveil its new line of Broncos with short films slated to be broadcast in the first commercial break of the 8 p.m. hour on Monday, July 13 on Disney’s ABC broadcast network and its ESPN and National Geographic cable outlets. The films will subsequently be made available for viewing on Hulu, the company’s ad-supported streaming service, on July 14.

Ad money from large auto companies has been harder to come by in recent weeks. Amid the coronavirus pandemic, automakers are among the marketers paring back their spending. The number of 30-second TV ads from car companies was off by as much as 56% during the weeks of May 4 and May 11, according to Kantar, a tracker of ad spending. During the week of June 15, the number of 30-second ads from car companies was down 31% from the year-earlier period, according to Kantar.

But the introduction of Ford’s new Bronco lineup of SUVs had been on the calendar for quite some time. Ford had planned to reveal the new vehicles in June at a revamped,North American International Auto Show in Detroit. The pandemic forced the cancellation of that event, so Ford devised a new strategy, hoping to attract a larger audience by using traditional video commercials.

Using a “roadblock,” or running TV ads across different networks simultaneously, is a time-worn advertising strategy. In decades past, advertisers would work with a handful of different TV outlets to synchronize the appearance of a single commercial in hopes that its pitch would be one of the few things TV viewers might see at a given time. As the number of TV options exploded with the rise of cable, however, the tactic has been more difficult to put in place, and now is often coordinated with a single media company across the properties it owns. For Disney, the technique may have greater relevance, given the number of outlets placed under its corporate umbrella since its $71 billion acquisition of the cable-and-studio assets of the former 21st Century Fox in 2019.

“At Disney, we take pride in creating culture and leveraging our unrivaled portfolio of brands to authentically and creatively tell stories during meaningful moments,” said Rita Ferro, president of Disney Advertising Sales, in a prepared statement. “With Ford, we’re reimagining what a product reveal can look like by drawing upon our best-in-class sports, entertainment and streaming brands to bring the new Bronco family to life in a way that honors its heritage and gives viewers an unforgettable experience.”

Ford isn’t running the same video on each Disney outlet. Instead, it teamed with Disney CreativeWorks, an internal marketing unit, to tailor different vignettes for each TV appearance. On ABC, for example, the Bronco will be featured in a three-minute film starring country music singer Kip Moore during “CMA Best of Fest.” On ESPN, a vignette featuring a different Bronco model and professional climber Brooke Raboutou will air during “SportsCenter.” And on National Geographic, Jimmy Chin, a professional climber and  director and photographer, will spotlight another Bronco during “National Parks: Yosemite.” Chin will also judge a hashtag challenge contest and appear in an Instagram Story featuring the Bronco on NatGeo’s Instagram account.

On July 14,  the three films will be available on Hulu, where viewers may choose to watch them within a collection of outdoor and survival-themed content aligned with the Bronco lifestyle. Ford will share additional content with fans on its YouTube, Facebook, Instagram and Twitter channels starting at 8:00 p.m. ET on July 13 – including additional details of each new Bronco model.

“Ford Bronco is an icon that has captured people’s imaginations and inspired them to explore the most remote corners of America and the world since the 1960s,” said Jim Farley, Ford’s chief operating officer, in a prepared statement. “As a new era for Bronco begins, we’re proud to tap the strengths of epic adventurers like Jimmy Chin and Disney storytellers to help bring Bronco to life and inspire millions of people to get out into the wild.”

The Walt Disney Company board announced Thursday that it has elected Michael Froman as a new director.

Froman is the vice chairman and president of strategic growth at Mastercard, where he works to expand strategic partnerships with governments, NGOs, and other institutions. Froman also oversees Mastercard’s Center for Inclusive Growth, an independent subsidiary of the company that aims to create more equitable financial growth around the world.

“The Walt Disney Company is an iconic brand that has the power to inspire generation after generation,” Froman said. “I am honored to join the Board and share my experiences and insights to help this great company explore new opportunities around the world.”

Prior to joining Mastercard, Froman worked as the U.S. Trade Representative from 2013 to 2017 and as a deputy national security adviser for international economic affairs under President Barack Obama.

“Given his broad experience and extraordinary career spanning both the public and private sectors, Mike brings a unique perspective that will be extremely valuable as we continue to build the future of Disney,” said Bob Iger, chairman and chief executive officer for the Walt Disney Company. “In particular, his keen insights into finance, international trade, and government partnerships make him a great fit for our Board during this dynamic era of innovation and global growth.”