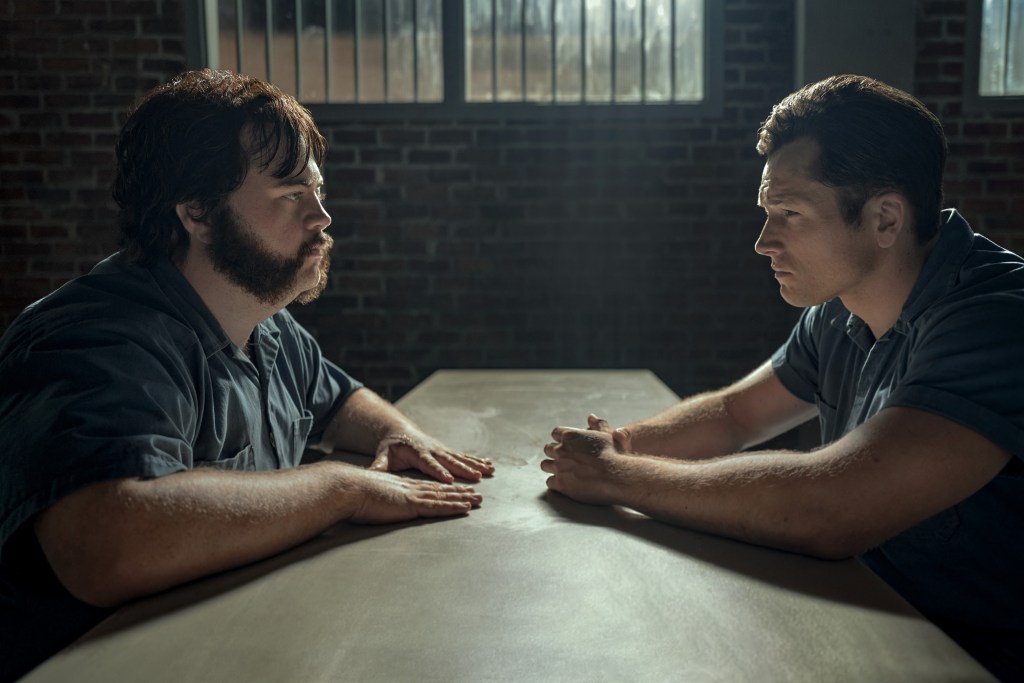 Based on James Keene and Hillel Levin’s true crime memoir “In With The Devil: A Fallen Hero, A Serial Killer, and A Dangerous Bargain for Redemption,” “Black Bird” stars Egerton as Keene, a police officer’s son who is sentenced to 10 years in a minimum security prison for drug dealing. While serving his sentence, he is offered a chance for early parole, on the condition that he move to a prison for the criminally insane and befriend serial killer Larry Hall (Hauser). Keene reluctantly agrees to the unusual case, and develops a complicated relationship with Hall as he attempts to discover the truth behind the murders the convict is suspected of committing. In addition to Egerton and Hauser, the series also stars Sepideh Moafi, Greg Kinnear and Ray Liotta.

“Black Bird” was developed by Dennis Lehane, who executive produces alongside Keene, Egerton, Kary Antholis and Michaël R. Roskam, who directs the first three episodes. Richard Plepler executive produces through Eden Productions; Bradley Thomas, Dan Friedkin and Ryan Friedkin through Imperative Entertainment; and Alexandra Milchan and Scott Lambert through EMJAG Productions. Jim McKay and Joe Chappelle will direct the last three episodes of the show. The series is produced by Apple Studios for Apple TV Plus.

“Black Bird” will premiere the first two episodes on July 8, followed by new episodes every Friday. The limited series will run for six episodes.

The first episode of “Killing It” has been released early on Peacock, the streamer has announced. The show, which stars Craig Robinson as a security guard and father who participates in a state-wide snake hunt in an attempt to win a cash prize, was initially scheduled to drop all 10 episodes on the platform April 14. Dan Goor and Luke Del Tredici created the series and executive produce with Robinson, Mark Schulman and Mo Marable. Claudia O’Doherty, Rell Battle, Scott MacArthur, Stephanie Nogueras, Wyatt Walter and Jet Miller round out the cast. The remaining nine episodes of the season will launch on the initially-scheduled premiere date.

Season 17 of “America’s Got Talent” and the new series “Dancing with Myself,” which features Shakira, Nick Jonas and Liza Koshy, will have back-to-back premieres on May 31, NBC announced. The two shows kick off the network’s summer lineup, which will be followed with “American Ninja Warrior” returning for a new cycle on June 6 and the latest season of “Who Do You Think You Are?” returning on July 10, featuring Allison Janney, Zachary Levi, Nick Offerman, Billy Porter, Zachary Quinto and Bradley Whitford as guests. All four programs will stream on Peacock the following day.

HBO Max has released the official trailer for “The Garcias,” a new sequel series to the 2000 Nickelodeon sitcom “The Brothers García,” the first English-language sitcom to have an entirely Latino cast and creative team. Ada Maris, Carlos Lacamara, Alvin Alvarez, Jeffrey Licon, Bobby Gonzalez and Vaneza Pitynski all reprise their roles from the original series, and are joined by Oliver Alexander, Nitzia Chama, Maeve Garay, Paul Rodriguez, Jr., Ayva Severy, Trinity Jo-Li Bliss and Elsha Kim. The original “The Brothers García” creator Jeff Valdez returns to showrun and executive produce the series alongside Sol Trujillo under their New Cadence Productions banner. The show will premiere on HBO Max April 14. Watch the full trailer below.

Airport television network ReachTV will partner with the IMG-owned inflight and in-ship sports channel Sport 24. The multi-year deal will see the two collaborating to utilize ReachTV’s more than 2500 owned and operated airport screens throughout North America. Sport 24 broadcasts live sporting events and leagues including the NBA, NFL, NHL and the tennis grand slams and its channels are shown on international airlines including JetBlue, Emirates, Turkish Airlines and Singapore Airlines. The partnership bolsters ReachTV’s move into the sports world. In addition to ReachTV’s multi-year licensing agreement with the NFL, the network has partnerships with “The Tonight Show with Jimmy Fallon,” “SNL,” “The Today Show,” “The Kelly Clarkson Show” and others.

The Apple TV Plus documentary series “The Long Game: Bigger Than Basketball” will debut globally on April 22. The five-part series will follow the coming-of-age story of basketball star Makur Maker, as he aspires to an NBA career and faces physical challenges, along with the global pandemic. The show will also explore his journey fleeing South Sudan as a child and coming to the United States. The series is directed and executive produced by Seth Gordon (“Undefeated“), in addition to executive producers Nikki Calabrese, Andrew Fried, Dane Lillegard, Sarina Roma, Jordan Wynn, Luis Lopez, Julia Gunn and Sony Pictures Television. “The Long Game: Bigger Than Basketball” is produced by Exhibit A and Boardwalk Pictures for Apple.