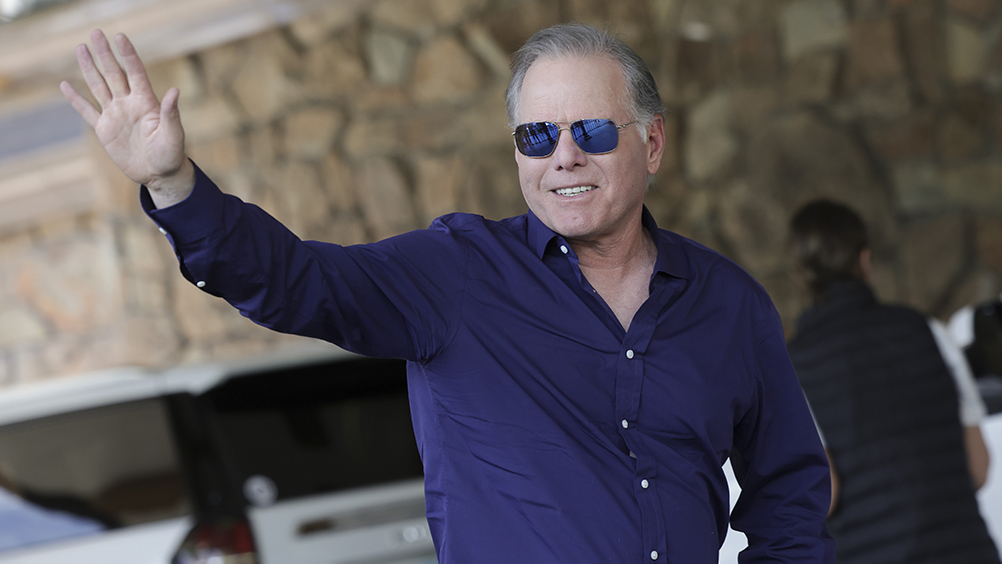 On Tuesday, dozens of titans of the business, media and tech worlds came out to play at the Sun Valley Lodge in Idaho for the start of Allen & Co.’s annual meeting of movers and shakers.

The invitation-only conference will include three days of seminars and meetings that are held away from the prying eyes of the public, which kick off Wednesday morning. So today was all about meeting and greeting each other at the posh retreat in Idaho’s picturesque Sawtooth Mountains.

Between 12 and 2 p.m., the black sedans and silver vans with the “Sun Valley” logo plastered on the side shuttled in Netflix’s Ted Sarandos and Reed Hastings, former Disney chief Bob Iger, current Disney CEO Bob Chapek, Warner Bros. Discovery’s David Zaslav, Google’s Philipp Schindler and name-brand investors Warren Buffett and Henry Kravis (who was in the driver’s seat for his entrance).

The rush of big-name attendees on the grounds before 3 p.m. was unusual for a Sun Valley start. The traditional peak time for arrivals is traditionally in the afternoon, which meant several reporters and camera operators hadn’t made it on to the scene to see the impressive lineup of early comers. The later wave included Michael Bloomberg, Sheryl Sandberg (in one of her first big outings since leaving Facebook), Uber CEO Dara Khosrowshahi, investor Wendi Murdoch, CNBC anchor and New York Times writer Andrew Ross Sorkin, author Bari Weiss, Snap’s Michael Lynton and Liberty Media’s Greg Maffei.

Throughout the day, attendees — many of whom came with spouses, kids and dogs in tow — took very different approaches when it came to seeing and being seen.

Zaslav came over to the Duck Pond (aka the media holding pen) outside the lodge to speak with reporters not just when he first arrived, but also as he headed out to dinner. And he had a captive audience, because the Warner Bros. Discovery chief was the only one who stopped by to give a few on-the-record quotes at all.

Sandberg and Chapek were among those who seemed to manuever quickly out of sight of cameras and reporters. Hastings and Sarandos avoided the press together, ducking into a dark van posted immediately outside the entrance after check-in.

But Sun Valley guests had no problem rubbing elbows with each other. Iger and Grazer were seen eating lunch together with their spouses at the Konditorei cafe on the property. The two spent much of the day together, with Grazer also taking time to sit down and chat with investor John Miller. Zaslav and Home Depot co-founder Ken Langone chatted for a while upon seeing each other right in front of the lodge.

On Wednesday, Sun Valley guests will be up bright and early to head into the lodge for the morning sessions that typically focus on global macro-economic issues and global political concerns.

SUN VALLEY, Idaho — Taking in the sun and having some outdoorsy fun was top of the agenda as dozens of media and tech leaders converged Tuesday for the start of the annual Allen & Co. conference.

The mood was decidedly chill this year as the silver SUVs began dropping off moguls and CEOs at Sun Valley Lodge in the early afternoon. Shari Redstone, vice chair of CBS and Viacom, commented on the “gorgeous day” as she made her way in to the lodge. If the long-gestating merger talks between CBS and Viacom are starting to come to head, as is rumored, Redstone’s wide smile didn’t show any signs of boardroom strain.

Comcast chairman-CEO Brian Roberts said he was happy just to “enjoy the sun” this year. That’s a marked contrast from last year when Comcast and Disney were in the thick of a bidding war for 21st Century Fox (which is now Team Disney) and Sky (now Team Comcast) during the Allen & Co. confab. Lachlan Murdoch, CEO of the newly minted Fox Corp., rocked a pair of white sunglasses as he strolled the resort grounds with his wife, Sarah Murdoch. ICM Partners chief Chris Silbermann worked up a sweat on a bike ride with his son.

Once the arrivals were in full swing, people-watching around the resort’s Alpine village setting was intriguing, to say the least. Facebook chief operating officer Sheryl Sandberg was palling around with Marni Levine, her COO counterpart at Instagram. Later, inside the resort’s Konditorei cafe, Sandberg and Activision’s Bobby Kotich were deep in conversation. Spotify chief Daniel Ek and Spotify CFO Barry McCarthy were doing the same, but outside on the patio.

One of the marquee speakers lined up for the high-wattage business crowd this week is said to be Secretary of State Mike Pompeo. No doubt the question of tariffs and trade policy will be a hot topic for the CEOs who have to navigate the real-world implications of President Trump’s decisions.

The art of storytelling is also expected to be a theme of the conference this year. Discovery CEO David Zaslav said he was eager to hear from perspectives on the content marketplace from those in the FAANG sphere.

“I’m interested to get a better understanding of how they see IP and where they’re spending their time,” Zaslav told Variety. “They have the most compelling platforms. They can take content everywhere in the world at one time in any language.”

Former CAA titan Michael Ovitz took a moment upon arriving at Sun Valley with his financee, designer Tamara Mellon, to reflect on current events in his old business.

“A deep mess” is how he described the battle raging between Hollywood’s largest talent agencies and the Writers Guild of America. “I have no idea why it got to this point,” he said.

Although Ovitz is nearly 25 years removed from his days of ruling CAA, the thought of enduring an exodus of hundreds of writer clients inside of a few days seemed to genuinely pain him.