Strictly Discs in Wisconsin, in a Pandemic: Young People Were Buying More Vinyl Prior to COVID-19 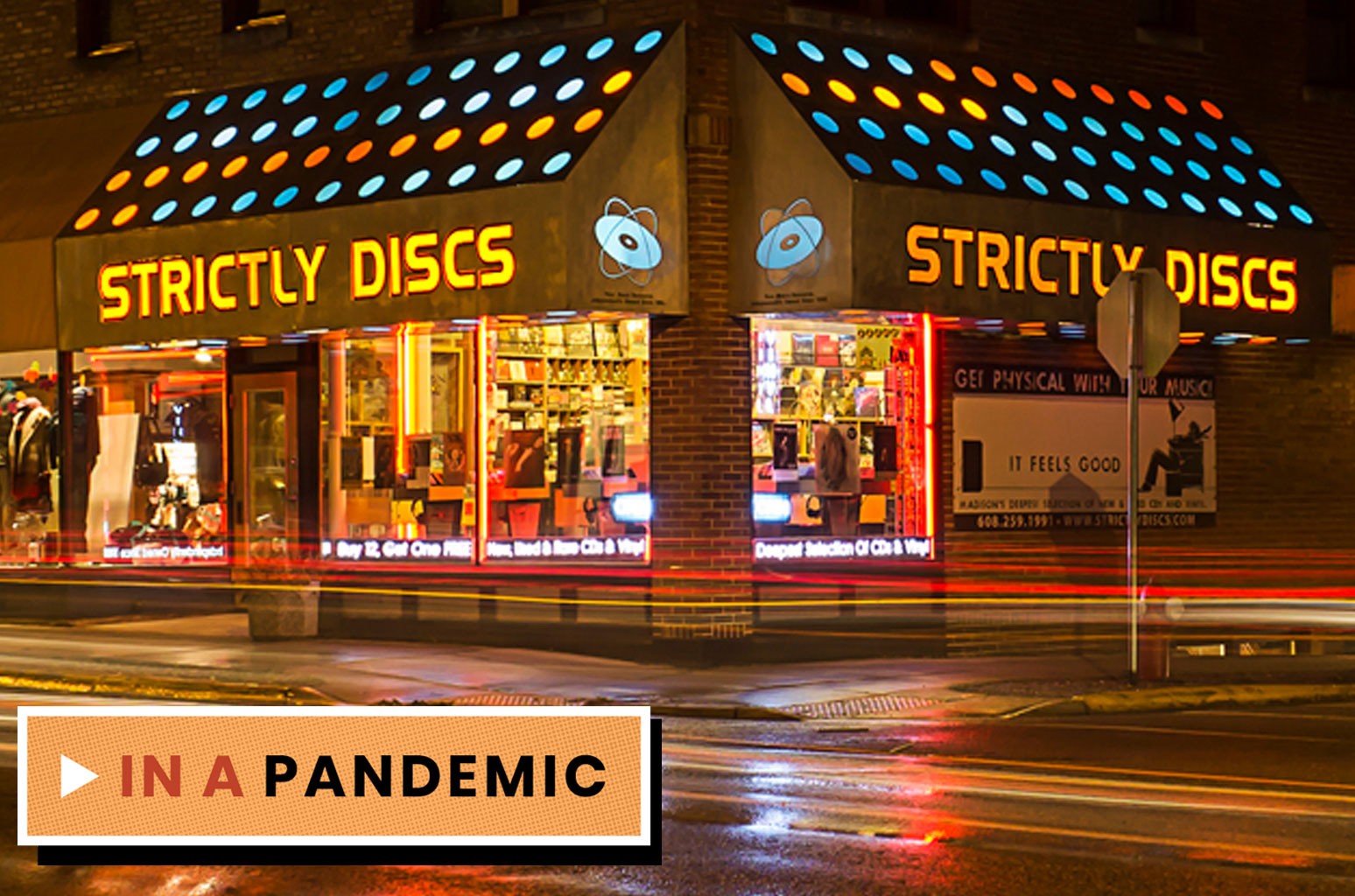 How’s the weather out there in Madison?

Beautiful. We’ve had such a cold spring, but it’s [been] warm the last couple days and [it’s] starting to feel like it’s going to be spring.

That must be a nice feeling after months of freezing temperatures.

It is a great feeling. There have been many Record Store Days, which would have been last weekend, where we have gotten snow the week before. But it’s always that really heavy, wet snow that goes away.

Now that Record Store Day is in June and July, is that something you’d prefer going forward?

Certainly for us, the weather is much more favorable in those months. There are some Record Stores Days [from the] past where even if the temperature itself isn’t brutal, when you combine getting in line when it’s dark and standing on concrete, it feels really cold after a few hours. So yes, June and July is great for us. I would imagine people in the Southwest and the South might say the opposite.

I know you’ve been fully vaccinated for awhile now. Have you been sort of loosening up as far as gathering with friends and that kind of thing? Or are you still being cautious?

For us, it’s changed very little. We did have some friends come up who live north of Chicago. They came up weekend before last and stayed overnight. We had supper and listened to some music and just generally had a great time because we hadn’t seen them in a year. It just felt gleeful, I would say [was] our general tone. But otherwise, I think it’s just gonna take me a little while to get accustomed to what normal might look like. So I think I will likely be quite cautious until at some point someone tells me I need to loosen up. [Laughs]

I feel like I’m a little bit that way as well. I don’t think I want to be eating inside a restaurant right now.

Yeah, I think it’s gonna be an interesting process to see what everybody’s comfort with risk is and how it might vary. But I think we’ve gotten so conditioned to be cautious and maybe even frightened that it seems hard to maybe change your mindset on that.

We posted a story recently about vinyl sales and how they were up 46% last year, and a lot of that was attributed to younger people buying records. Do you think it’s a bubble, or is that trend going to last?

Like with any new hobby, there’ll be some people who it is just a fad [for] and they may decide it’s not for them. Certainly, new records are fairly expensive compared to, say, CDs or digital music files. And so that’s not going to be for everybody. It’s heavy. You know, if you’ve decided you’re going to be in a career perhaps that involves a lot of moving, maybe this isn’t the best use of time or energy. But I do think there are a lot of people who get a lot of gratification consuming their music from vinyl, both the physicality of the jackets and the photographs and the liner notes. But then also the concept of slowing down to enjoy it. So I think there will certainly be some folks that have dipped their toe in the pool that will decide it’s not for them, but I think equally as many of those will decide that this is something they enjoy.

Why do you think that young people did start seeking out vinyl during the pandemic?

It’s definitely grown, but it’s also been a trend that [had] been growing prior to the pandemic. So I don’t know if I consider that cause and effect. But I do believe there is something to the fact that you’re talking about a demographic of music consumer who may only have listened to songs in a digital way, whether it be through a small stereo system or through earbuds or headphones. And if you all of a sudden jump up to a stereo system that has some good sound quality and you put a record on, naturally, most of those individuals are going to be blown away by how that sounds. Also, the concept of listening to an album front to back is so different, when you’re talking about an artist’s concept, than just listening to a track or two.

I feel like there’s also something sort of Instagrammable about like posting a photo of your new turntable or your new vinyl album on social media. There’s sort of a visual appeal that you don’t get with a CD.

I think there’s definitely an element of cool to records.

I was looking on your Instagram page and I saw that — I think it was probably Ron — posted a photo of this collection that he was going through with like floor-to-ceiling shelves of records. Can I ask how that went?

I think the photo that you’re referencing, I believe he’s still working on that collection.

When he’s going through this stuff, does he call you or text you and get excited about certain things that people may have?

Certainly he’ll message either myself or friends about [things] that might have you a connection or something that is enjoyable for multiple people, or if he has a question about something. But generally, he kind of puts his head down and gets it done, so I don’t typically hear a lot from him.

I feel like I would enjoy going through a collection like that, but I imagine it can also be tedious.

Everybody in our orbit loves that idea until it becomes time to box it up and carry it out. That’s the part [where] it’s kind of like asking your friends to help you move.

Have you heard how the man who collapsed in your shop has been doing since?

Has he been back in the store?

He has not yet, but he is at home kind of healing and all that great stuff. So I do look forward to seeing him soon.

Strictly Discs in Wisconsin, in a Pandemic: ‘There Seem to be Improvements’ in USPS Delivery Times

In October 1988, Angie Roloff and her husband Ron opened Strictly Discs in Madison, Wisconsin, after Ron left a career in the biomedical research field to pursue his love of music full time. Nearly 31 years later, the couple made the difficult decision to shutter in-store operations due to COVID-19, roughly a week before Governor Tony Evers forced a mandatory shutdown of all non-essential businesses. Now that the Wisconsin Supreme Court has ove