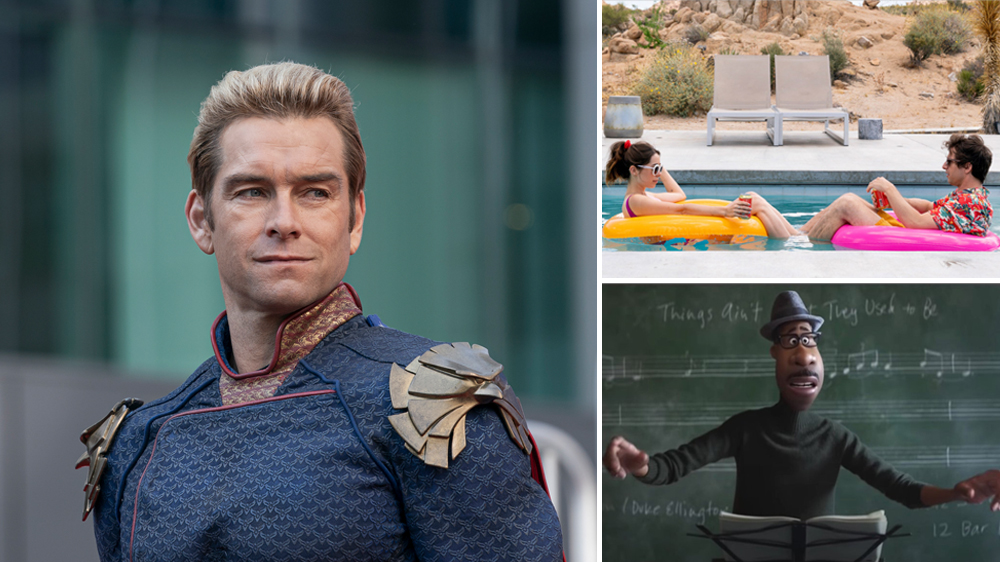 “The Boys,” “Soul” and “Palm Springs” emerged as the big winners from the inaugural Critics Choice Super Awards.

Amazon Prime Video’s superhero-vigilante drama “The Boys” nabbed the most wins of any title, with four: superhero series, actor in a superhero series for Antony Starr, actress in a superhero series for Aya Cash and villain in a series, again for Starr. Both “Palm Springs,” the Hulu/Neon film starring Andy Samberg, Cristin Milioti and J.K. Simmons, and the animated Disney Plus feature “Soul” each took home three trophies. “Palm Springs” picked up earned the science fiction/fantasy movie award, as well as the actor and actress awards in that genre category for Samberg and Milioti, respectively. “Soul” earned the animated movie award and both the voice actor and actress awards for Jamie Foxx and Tina Fey, respectively.

When it came to studios and networks, Netflix led the pack with five overall wins: action movie (“Da 5 Bloods”), actor in an action movie (Delroy Lindo in “Da 5 Bloods”), animated series (“BoJack Horseman”), voice actor in an animated series (Will Arnett in “BoJack Horseman”) and superhero movie (“The Old Guard”). Amazon, Disney Plus and Universal all tied for second-most wins, with four each.

The Critics Choice Assn. also handed out a legacy award for the “Star Trek” franchise, which was accepted by Patrick Stewart and Sonequa Martin-Green during the broadcast of the event on the CW. Stewart also took home the actor in a science fiction/fantasy series award. Kevin Smith and Dani Fernandez hosted the event special, which was produced by Bob Bain Productions.

The Critics Choice Super Awards was produced remotely under COVID-safe protocols, designed to honor the most popular genres and their talent across screens both big and small. See below for the full list of winners:

BEST VILLAIN IN A SERIES
Antony Starr – “The Boys” (Amazon)

For American audiences, who’ve been deprived of a traditional release slate while the country copes with the COVID-19 pandemic, Christmas Day brings the closest thing to a blockbuster weekend that 2020 has seen so far — including the delayed releases of a few films originally intended for earlier in the year.

Two of the week’s highest profile movies — DC sequel “Wonder Woman 1984” and Pixar original “Soul” — are going about their openings in very unconventional ways, shifting from wide theatrical releases to streaming debuts on their studios’ respective platforms. Gal Gadot returns as the Amazon goddess with the golden lasso in the ’80s-set “Wonder Woman 1984,” the first tentpole Warner Bros. has redirected to its subscription-based HBO Max service (although superhero fans will be able to see it on the big screen in markets where the health crisis hasn’t forced cinemas to close). “Soul” will forgo a theatrical release in the U.S., opening via Disney Plus instead — a shame, considering the marvelous visual and musical work that went into the film, but a blessing for families wanting to share the experience in a safe environment over the holidays.

Exclusive to theaters, Tom Hanks tries out a Western in Paul Greengrass’ “News of the World,” featuring stunning cinematography that audiences will be glad they opted to take in on the big screen. And Roberto Benigni has now lived long enough to graduate from playing Pinocchio to the role of his wood-carving adoptive father Geppetto in Matteo Garrone’s Italian-language adaptation, a hit Christmas release last year in Italy that now finds its way to American screens.

Also worth the wait, three terrific Sundance movies — buzzy independent films which premiered at the festival in Park City last January — find their way to screens this week. So far only in theaters, “Promising Young Woman” was the talk of the fest, featuring Carey Mulligan as a crusader who’s taken it upon herself to teach predatory men a lesson, posing as drunk at bars and then turning the tables on whoever attempts to take advantage of her. Equally enraging in its own way, the documentary “The Dissident” delves into the murder of journalist Jamal Khashoggi. And on a lighter note, Amazon Prime pickup “Sylvie’s Love” is a throwback to classic Hollywood love stories.

And for those who’ve forgone theaters in favor of Netflix this year, it’s a boffo week for the service as well. In addition to streaming such awards contenders as “Ma Rainey’s Black Bottom” and “Mank,” Netflix launches director-star George Clooney’s latest, the sci-fi quest film “The Midnight Sky,” as well as a more lighthearted superhero-themed offering for the kids, “We Can Be Heroes” from “Shark Boy and Lava Girl” director Robert Rodriguez.

Here’s a rundown of those films opening this week that Variety has covered, along with links to where you can watch them. Find more movies and TV shows to stream here.

The Dissident (Bryan Fogel) CRITIC’S PICK
Distributor: Briarcliff Entertainment
Where to Find It: In select theaters, followed by premium on demand release Jan. 8
Oscar winner Fogel’s movie is a full-blown investigation into the assassination of Jamal Khashoggi, the Saudi Arabian editor and Washington Post columnist whose gruesome murder, on Oct. 2, 2018, was in all likelihood conceived and ordered by the highest levels of the Saudi monarchy. When it comes to edge-of-your-seat intrigue, this is a movie with just about everything. It’s got mystery and conspiracy coalescing around men of unfathomable power. It’s got inside-the-palace-walls homicidal backstabbing. — Owen Gleiberman
Read the full review

News of the World (Paul Greengrass)
Distributor: Universal Pictures
Where to Find It: In theaters
Tom Hanks is the kind of actor about whom we accept the aphorism that he could read the phone book and make it sound great. Reuniting Hanks with “Captain Phillips” director Paul Greengrass, laconic Western “News of the World” tests that theory by casting the star as a news reader, a Civil War veteran who travels across Texas to deliver the nation’s headlines to small-town residents hungry for updates from afar — and the result, while gorgeous to behold, is only slightly more exciting than the phone book option might have been. — Peter Debruge
Read the full review

One Night in Miami (Regina King) CRITIC’S PICK
Distributor: Amazon Studios
Where to Find It: In Miami theaters, expanding Jan. 8, followed by Prime Video on Jan. 15
“One Night in Miami” is one of those dramas with a hooky, irresistible meeting-of-the-minds premise that places four legends in a single room, all so that we can sit back and watch the verbal-philosophical fireworks fly. The movie takes place on Feb. 25, 1964, the night that Cassius Clay, at 22, won the world heavyweight championship. To celebrate, he heads over to the modest, rather shabby small suite where his friend Malcolm X is staying at the Hampton House. There, the two are joined by the football superstar Jim Brown and the soul legend Sam Cooke. — Owen Gleiberman
Read the full review

Pinocchio (Matteo Garrone)
Distributor: Roadside Attractions
Where to Find It: In theaters
Enough time has passed since Roberto Benigni’s ill-starred “Pinocchio” for the actor to move more happily into the role of Geppetto in Matteo Garrone’s visually rich though oddly subdued version of the perennial tale. Given the director’s penchant for multi-strand narratives, the classic story would seem a good fit. Instead however, Garrone’s live-action entry, while more faithful to Carlo Collodi’s original novel, underplays the significant elements of cruelty, creating a child-friendly movie with its fair share of enchantment but curiously lacking in memorable highlights. — Jay Weissberg
Read the full review

Promising Young Woman (Emerald Fennell)
Distributor: Focus Features
Where to Find It: In theaters
Fennell’s first directorial feature is a female revenge fantasy that hews to some of the tropes in that genre, but also takes considerable joy in upending viewer expectations. Starring Carey Mulligan as a woman on a singular mission, this unclassifiable, somewhat uneven but always compelling mix of thriller, black comedy and a whole lot of whatnot is going to stir a lot of debate. “Species,” this is not — nor even an updated “Ms. 45.” — Dennis Harvey
Read the full review

Sylvie's Love (Eugene Ashe)
Where to Find It: Prime Video
Sultry music swells as the camera swoons over a young couple in a tender nighttime embrace. The 1950s residential New York City street is carefully rain-slicked and lined with shiny classic cars: an obvious stage set. Gene Kelly might just have swung on that lamppost; Doris Day might lean out of an upstairs window to sigh at a painted moon. But the canoodling stars of Eugene Ashe’s Sundance competition title “Sylvia’s Love” are Black, which is among the sole indications that this weightlessly glossy yet undeniably charming romance is a product of the 21st century. — Jessica Kiang
Read the full review

Exclusive to Disney Plus

Soul (Pete Docter) CRITIC’S PICK
Where to Find It: Disney Plus
Where do people get their personalities? Do parents play a part, or are such things somehow determined before birth? For centuries, doctors of psychology, doctors of philosophy and doctors of theology have contributed their thoughts on the subject, but the latest breakthrough comes from another kind of doctor entirely: Pete Docter, the big-idea Pixar brain behind outside-the-box toons “Inside Out” and “Up,” who takes a look deep inside and comes up with another intuitive, easy-to-embrace metaphor for — dare I say it — the meaning of life.  — Peter Debruge
Read the full review

Wonder Woman 1984 (Patty Jenkins)
Where to Find It: In theaters and on HBO Max
For nearly two hours of its 151-minute runtime, “Wonder Woman 1984” accomplishes what we look to Hollywood tentpoles to do: It whisks us away from our worries, erasing them with pure escapism. For those old enough to remember the ’80s, it’s like going home for Christmas and discovering a box full of childhood toys in your parents’ attic. This is what it felt like to watch Richard Donner’s “Superman” for the first time, or to marvel at the strong female role models of such vintage TV shows as “Wonder Woman” and “The Bionic Woman.” — Peter Debruge
Read the full review

DNA (Maïwenn)
Where to Find It: Netflix
Maïwenn bills herself last in the principal cast credits for “DNA.” On the one hand, it seems a courtesy to the formidable ensemble of her fifth feature as director, stacked as it is with stars from Fanny Ardant to Louis Garrel to Marine Vacth — all on fine, uninhibited form in a dysfunctional-family drama that frequently demands maximum volume from them. Yet the modesty seems coy in a film that eventually becomes a magnified, almost impenetrably personal star vehicle for Maïwenn herself, inspired by her own investigation of her diverse cultural identity. — Guy Lodge
Read the full review

The Midnight Sky (George Clooney)
Where to Find It: Netflix
Clooney’s early films had dash and spirit and verve. This one is sodden with self-importance. Unfolding in one of those distant futures that’s just like the present except more glum, “The Midnight Sky” cuts back and forth between two settings: the frozen wilderness of Antarctica, where Clooney plays the sole researcher left at an empty observatory; and a NASA spaceship that looks from the outside like a baroque Christmas ornament as shot by Stanley Kubrick. Each setting has a way of being less gripping than the one the film has just cut away from. — Owen Gleiberman
Read the full review

We Can Be Heroes (Robert Rodriguez) CRITIC’S PICK
Where to Find It: Netflix

What’s Coming to Disney Plus in December 2020